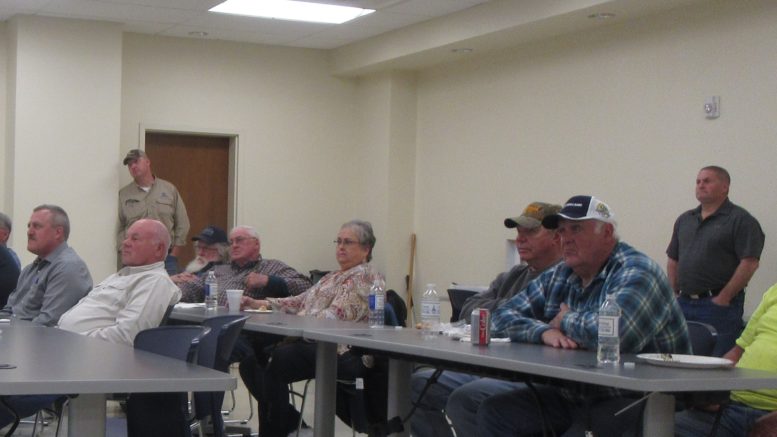 A portion of the municipal leaders who took part in a question and answer session with Cabot and GDS managers after a luncheon at Cabot’s Dimock headquarters on April 30 as Cabot completions foreman Steve Brominski (back, left) and general foreman Chris Erhert (back, right) stand by to field questions. PHOTOS BY RICK KIDUK

Township supervisors and borough council representatives from across Susquehanna County were largely positive about the professionalism and good manners of drivers working for both Cabot Oil & Gas Corporation and Gassearch Drilling Corporation (GDS), the company that hauls most of Cabot’s production water. They are also satisfied that the natural gas company has assumed most of the responsibility for rebuilding the roads that are heavily impacted by drilling activity.

“It’s not as bad as it used to be,” Ron Teel of Dimock Township remarked. ”The Cabot drivers are the best when it comes to courtesy. They even helped a hunter get his deer out of the woods,” he added in reference to an older hunter who needed a hand.

“It has really changed over the years,” Denny Bunnell from Jessup Township concurred. The GDS trucks, even when they are running at night, will stop and shut down to just running lights to let you by.”

Many were in agreement, however, that the drivers of the tankers used for hauling silica for fracking operations (aka – sand cans) are not following the same protocol. The same was said about some of the trucks moving drilling rigs from one pad to another during a lunch meeting for municipal leaders held at Cabot’s headquarters in Dimock on April 30.

Cabot external affairs manager George Stark and Cabot completions foreman Steve Brominski tallied more than 4-million miles driven between Cabot and GDS vehicles on Susquehanna County roads in 2018 without a safety violation. The trucks owned by both companies have GPS units installed that monitor speed, location and other variables. If a complaint is lodged by authorities or residents, the companies do their best to track down the source, often finding in recent years that the driver was employed by a subcontractor or a heavy-duty vehicle associated with another industry.

“We had our safest and most productive year last year,” said Stark, acknowledging as well that not all of the trucks related to the gas industry are operating at Cabot’s standards. “Hopefully, you lead by example and instill that culture,” he remarked. “But if complaints continue on one company or one driver, we have run them off.”

“They are the biggest thorn in our side,” Brominski concurred, in reference to drivers for some subcontractors. “They get paid by the load, but that doesn’t make it right. We will get ahold of the crews and address that.” Brominski was, in fact, scheduled to meet with the management of one such trucking company that afternoon.

“We have a fair amount of trucks. It’s the drivers that are hard to come by,” Brominski said of an ongoing need to find more employees with CDL certification. With a fleet of more than 50 GDS trucks and 139 water drivers that is expected to grow to 67 trucks and 300 drivers by year’s end, he added, “I think we’ve done a lot of good things on the road, but we’re never going to please everybody.”

In addition to the GPS units and etiquette training for drivers, water trucks are being run in groups of three. “There’s safety in numbers,” Stark maintained. “Everyone’s keeping their eyes on the other one.”

Stark provided additional details about Cabot’s planned expansion in 2019, including an expectation that the corporation will be spending $800 million dollars in Susquehanna County alone to meet a 20 percent increase in production. This impacts you at home. There will be more work in your community and more local drivers hired,” he offered. On the other hand and the other side of the county, Stark noted, a new GDS trucking facility is under construction near Lenox. This full-service facility will house half of the GDS fleet and handle regular maintenance to keep those water trucks on the road. “This large, state-of-the-art facility has five bays that can each handle three tankers at a time,” Stark offered.

Cabot director of external affairs Bill desRosiers related that a new water line has been constructed south to Tunkhannock to connect to a new water withdrawal site near the Dunkin Donuts, also under construction to bring water to the Clark Water Impoundment near Devon’s restaurant on Route 29. The line is owned by Northeast Marcellus Aqua Midstream and being installed by TSE, Inc. and will reduce truck trips to and from Wyoming County by tens of thousands over the next few years.

“We’re always looking for ways to build out our infrastructure to improve efficiency,” desRosiers stated, noting that the terrain of Susquehanna County doesn’t lend itself as readily to lengthy water lines.

He did more than hint at a new CDL program that Cabot is exploring with the Susquehanna County Career and Technology Center (SCCTC) that will also provide heavy equipment training. Cabot, SCCTC and PennDOT are collaborating on a feasibility study for a full Class A, six-week course that will set students up for full endorsement and solid careers. Other contractors in the county have expressed support for the program, desRosiers noted. “Everything is lining up, but it is not officially approved yet.”

Road improvements and steady job growth aside, Stark said that, “While Cabot is proud of the nearly $60 million the company has spent and contributed over the past decade to enhance roadways and infrastructure, it’s the additional contributions to support community, educations and healthcare that make the greatest impacts.” He cited projects like the new hospital at Montrose and smaller undertakings like a park in Gibson and assisting with a new sidewalk project in Nicholson, Wyoming County as examples.

Telling those in attendance that he and desRosiers are always open to suggestions from municipal leaders for ways that Cabot can support and assist communities, Montrose borough council members Judy Kelly and Craig Reimel were quick to speak up.

Reimel mentioned the devastation caused by flash flooding last summer at Salt Springs State Park, noting that the park receives most of its support from the public, rather than the state. “You have equipment for rock moving and relationships with DEP and DCNR,” Reimel remarked.

Kelly proposed an especially novel idea. “I’d like to see a Museum of Natural Gas. It would be a destination and a great hands-on experience for kids,” she suggested, noting that it is sometimes difficult to properly explain the processes and benefits the industry brings to the area. “It’s not something that we were born to understand.” By being able to direct visitors and potential new residents to such a venue, she added, “We could take a lot of naysayers off your back.”