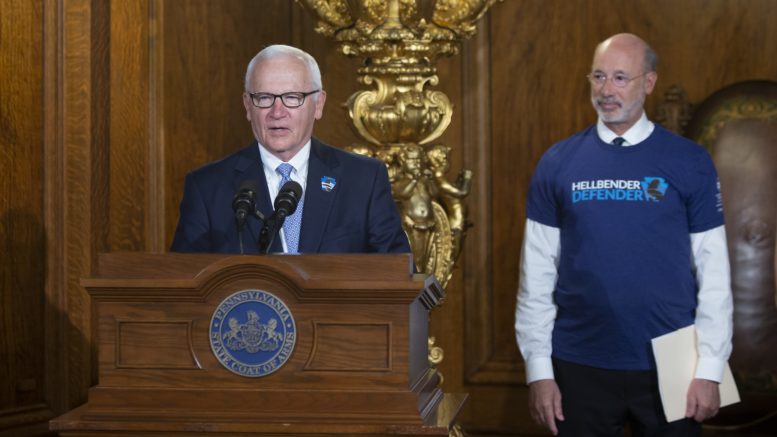 For 10 years, people residing in a three-square mile portion of Dimock Township have been caught in a “box” where the largest natural gas operator in the county has been prohibited by the state from drilling any new wells.

That situation needs to be resolved, according to State Senator Gene Yaw (R-23rd).

“DEP has been considering it for 10 years,” Yaw said. “That’s longer than the time period from when President Kennedy announced the United States would go to the moon and we got to the moon.”

In the letter to DEP Secretary Patrick McDonnell dated April 23, the senator pointed out that for the past 10 years, DEP has prohibited one natural gas company from drilling in an “arbitrary”… “box’” in Dimock Township; and seven years since DEP announced it would lift the moratorium on that area. “Cabot is still prohibited from development after seven years of study,” Yaw wrote to the secretary.

Sen. Yaw, who chairs the Senate Environmental Resources and Energy Committee, said he has made it known to Sec. McDonnell that the agency needs to make a decision on what he referred to as an “arbitrary area” where Cabot Oil & Gas Company is forbidden to drill new natural gas wells – often referred to as the Dimock Box.

The committee gave its nod last Wednesday to McDonnell’s nomination by Gov. Tom Wolf to continue to head the DEP.

Yaw said he has spoken with Sec. McDonnell and told him he wanted the “box” issue resolved, and followed that up with the April 23 letter.

The senator said Sec. McDonnell has promised DEP is very close to making a decision. “I take him at his word that that is what is going to happen,” Yaw said.

Yaw said, “(The Senate) goes back in session the first week in June. If I don’t have a decision by then, we will proceed with a hearing with all interested parties participating.” He said DEP, Cabot and affected landowners would be invited to participate in the hearing.

“The people really overlooked are the landowners in that box,” Yaw said. “Look at the impact on these people as the sit on some of the most productive shale gas in the United States and can’t develop it.”

Yaw said the pattern through the years has been one of DEP asking Cabot for more information, “and it’s never the right information. Someone needs to make a decision on this. There comes a limit as to how much information you need to make a decision. It’s hard to think that after 10 years of inquiries these are really legitimate requests.”

Yaw pointed out that as a result of the company’s drilling ban, property owners are being prohibited from collecting royalties because the wells cannot be developed or completed by Cabot, while other companies – Southwestern Energy and Chief – have been working in that “box” since 2010.

“(The ban) has hurt people in the area. They can’t develop their property” Yaw said.

In testimony from McDonnell in February, it was indicated that water levels have cleared for six properties, and seven others required ongoing testing, and five landowners have not allowed access to their properties.

In April 2010, DEP suspended Cabot’s operations in the nine-mile “box” after the agency determined the company’s gas wells were responsible for methane that seeped into residential drinking water wells. The company was order to fix the affected water supplies, but a number of the families appealed Cabot’s proposal to install methane elimination systems in the homes.

Later that year, Cabot settled the lawsuit brought by those families for $4.1 million in connection with methane contamination of water wells that was attributed to the drilling company. Residents received settlements that amounted to two times the fair market value of their homes, and Cabot agreed to install methane separators.

That settlement replaced an earlier DEP enforcement action that called for Cabot to install a public water line to the homes. The proposed waterline became a hot button issue locally at the time as it called for taxpayer funds to be used to install the line with the hopes of recouping the cost of the line from Cabot. Montrose Borough also opposed the proposed waterline which would have tapped into the borough’s water supply.

In 2012, DEP announced it would lift the moratorium if the company provided the state with requested information.

“We have done all we can to supply data to DEP. We have answered many calls from landowners regarding this matter. Collectively, I fully believe everyone wants to see this matter resolved,” Stark said.

“There’s nothing about this scenario that makes any sense anymore,” Yaw said.

Be the first to comment on "Sen. Yaw turns attention to Dimock ‘box’"