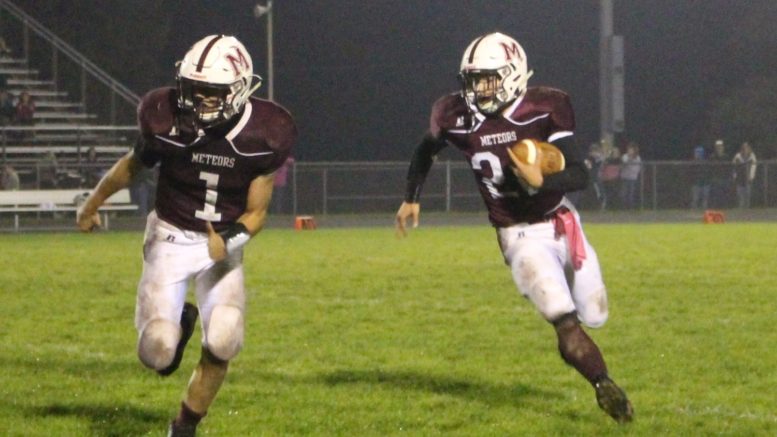 Montrose Running Back Brendan Kanna (#1) looks to make a block in a game last season. Kanna was appointed a co-captain for the Meteors and will be one of First-year Coach Bill Sandly's key players as Montrose heads into their season opener Friday versus Wyalusing. SC INDEPENDENT/ FILE PHOTO

Montrose will be a young team entering the 2019 football season and will lean on the experience of the few seniors on the squad. Brendan Kanna is proving to be one of those leaders.

The running back and linebacker comes into the season with a renewed enthusiasm and desire to help Montrose’s football fortunes around.

Kanna returns after leading the Meteors in rushing a year ago with 376 yards and three touchdowns while also hauling in one receiving touchdown. Kanna has bought into the new things that first-year coach Bill Sandly has brought to the program.

“We got some new equipment in the weight room and outside coach got us into some new footwork drills that has helped a lot,” said Kanna.

Upon the completion of the first week of practice Kanna was named a co-captain along with senior quarterback Ethan Cina. He sees his leadership role as helping the mental state of the underclassmen and making them feel at ease with the move up to the varsity level.

“We need to help build their confidence,” explained Kanna. “They might be a little nervous coming out with the bigger boys, but we can help them belong.”

Kanna earned Sandly’s confidence after getting into the weight room and working in the offseason.

“He had a slow start because of his commitment to the wrestling team,” said Sandly. “But once he was able to come on board he quickly stepped up.”

On a team small in numbers and light on experience, Kanna will see lots of action on both sides of the ball. Being able to persevere is something Kanna will take from his experience on the wrestling mat.

“(Wrestling) helps with my balance and my attitude,” said Kanna. “In wrestling you have to keep at it and never give up.”

That mentality is something Kanna feels he can bring to the football team. “Sometimes last year we’d be down at half and guys would give up,” said Kanna. “Coach is instilling a never give up attitude.”

Kanna believes the Meteors are showing progress every day whether it’s in the weight room or on the field.

“Everybody’s making progress, everyone started low and everyone is building up,” noted Kanna.

As far as goals Kanna is keeping things very simple. “I want to score as many touchdowns as I can, win some games, but most of all play as a team.”

Simple ideas coupled with determination to help turn the a once proud program around.