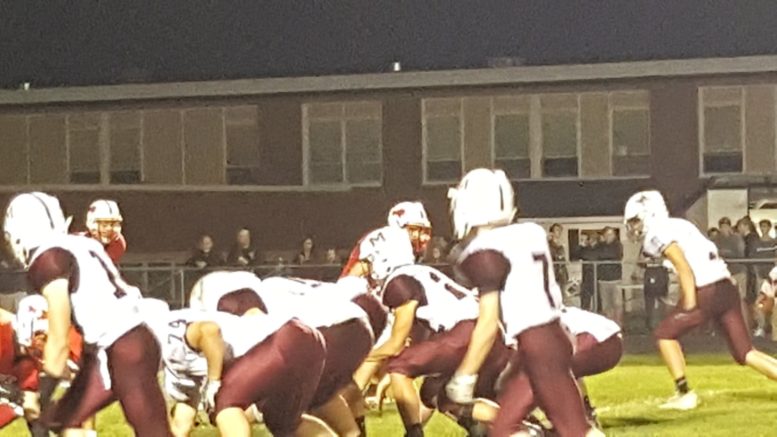 The weekend matchups in the Lackawanna Football Conference found two of the best Class A football teams in the state squared up against the local teams and Susquehanna and Montrose fans quickly discovered why their opponents were held in such high regard. 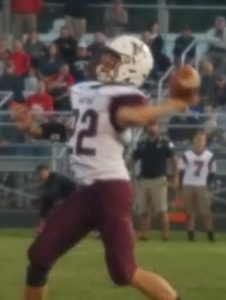 Montrose traveled to Tunnel Hill on Friday night to take on Lackawanna Trail and the Lions were less than hospitable host.

Montrose attempted to negate the Lions rush with a quick strike plan as Ethan Cina found Dominic Palmatier for a couple quick short receptions, but the drive stalled even after being extended by a roughing the punter penalty.

Taking over on downs Trail moved quickly on the ground capped off by Josh Brown’s 14-yard scamper to the endzone.

On the ensuing kickoff Montrose fumbled the ball and the Lions quickly scored when Ray Melnikoff scored from 19 yards out and with the extra point Trail led 14-0.

After another stalled drive Trail Quarterback Nico Berrios found Jeff Resto in the endzone for a 23-yard touchdown reception and Trail led 21-0 as the third quarter ended.

Montrose Coach Bill Sandly noted that Trail did nothing that Montrose wasn’t expecting and injuries to two key defenders, Brendan Kanna and Michael Brennan, made an impact.

“They ran what we expected them to run,” said Sandly. “It was just a matter of stopping them. We’re missing two key cogs that I know would have helped on the defensive end.”

Brown and Melnikoff added touchdown runs of 11 and three yards the first two Trail possessions of the second quarter and even after a 51-yard punt from Cameron Harder gave the Lions their worst field position, Kody Cresswell took a handoff 73 yards to the house for a touchdown.

Cina gave the Montrose cheering section something to cheer about when on third and 15 he lofted a pass down the sideline that Dominic Palmatier hauled in for a 70-yard touchdown reception.  After Henry Rogers added the extra point Montrose trailed 40-7.

“Early on, we wanted to make quick throws and after that their corners were just coming up and pressing,” said Cina.

The enthusiasm was quicky dissipated when on the ensuing possession Trail running back Luke Baldwin took a handoff and busted up the sideline for a 63-yard rushing touchdown to give Trail a 47-7 halftime lead.

Trail rested its starters in the second half and the teams traded possessions most of the half.

After a Cina pass was intercepted midway through the third quarter Trail scored their final touchdown when Johann Ella scored from three yards out.

Montrose moved the ball several times in the fourth quarter but one drive stalled at the Trail nine-yard line.

Montrose scored again when Cina dropped back and again found Palmatier streaking down the sideline hitting his receiver in stride for an 80-yard touchdown reception.

“He made a great throw and I just had to go get it,” said Palmatier.

Cina finished the night 7-17 passing for 195 yards and the two touchdowns. Palmatier had 185 of those yards on six receptions.

Late in the fourth quarter Montrose drove down the field with Freshman Gus Brown at quarterback. On a third down Brown hit Lance Rought for a first down and more.

Brown got the Meteors inside the 20 after completing a pass to Dylan Geertgens. However, two shots to the endzone before time ran out fell short capping the 54-13 loss.

Sandly searched for positives and stated that he liked the resilience his young squad exhibited at the end of the game.

“We continued to show a little fight at the end,” observed Sandly. “We executed a few things, got our quarterback some confidence with some completions and hopefully we can build on that.”

Being able to get Brown a series at quarterback was also something Sandly took as a positive. 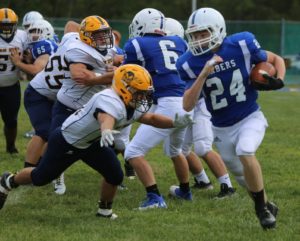 Layne Fisk (#24) scampers around a Blue Devil lineman as the Sabers fell, 47-14. PHOTO BY ED KING

“We got him some time and he showed what he can do,” said Sandly.

Old Forge the number one team ranked Class A team in the state, according to Pennlive.com, wasted little time in demonstrating the validity of the ranking when they invaded Susquehanna on Saturday afternoon. 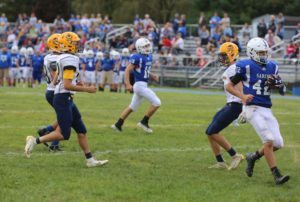 Quarterback Dante Lucarelli completed all five of his pass attempts hitting Michael DeGregorio from 35 yards out early in the second quarter and connecting with Tyler Carey for scores of 21 and 28 yards.

DeGregorio added a touchdown run at the end of the second quarter as the Blue Devils took a 33-0 lead into halftime.

Susquehanna avoided the shutout when Quarterback Jesse Delousia scored on runs of 50 and two yards. Delousia was filling in for injured Quarterback Garrett Decker.

Be the first to comment on "Top teams dominate Meteors, Sabers"