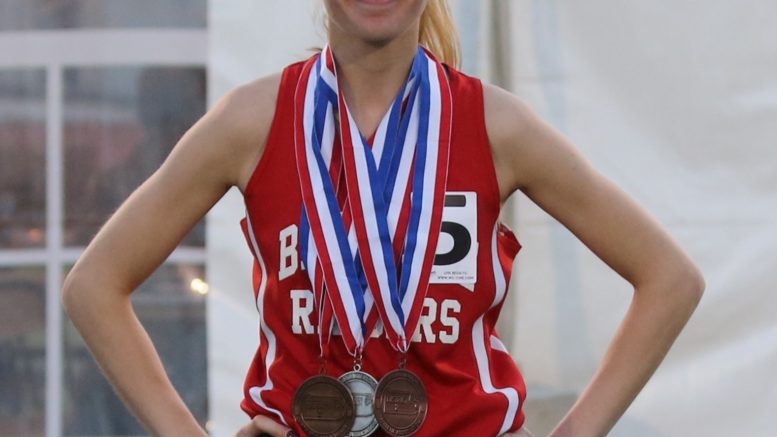 Blue Ridge’s Karris Fazzi was the top local female medalist at the District II Class 2A Championships. She qualified to move on to the PIAA State Championships with her second place finish in the 100-meter hurdles. Fazzi also placed 5th in the 400 and 800 meter races; and 7th in the long jump. PHOTO BY ED KING 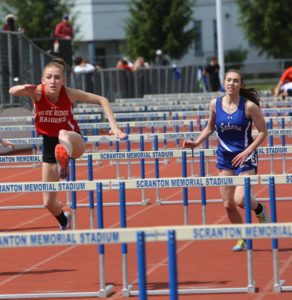 Medals graced the necks of 23 female area athletes at the District II Class 2A Championships, but none collected more hardware than Blue Ridge’s Karris Fazzi.

Fazzi highlighted the local girls’ results capturing four medals including a silver in the 100-meter hurdles to qualify for the State Championships for the first time since her freshman season.

Fazzi finished second to Western Wayne’s Trina Barcarola in the hurdle event. She also picked up fifth-place finishes in both the 400 and 800-meter races and a seventh-place finish in the long jump.

The first and second place finishers in each event qualified for the PIAA Championships.

Other locals earning a trip to Shippensburg were Montrose’s Chalice Guyette who finished second in the 100-meter and the Lady Meteors’ Hannah Perkins who took a silver in the 1600.

Forest City’s Sarah Korty who competes in a co-sponsorship with Carbondale Area also qualified for the state meet in the Discus and Shot Put after claiming second in each event.

Elk Lake’s Krista Jones captured Silver in the 3200-meter and was joined on the stand by Perkins who finished fourth. 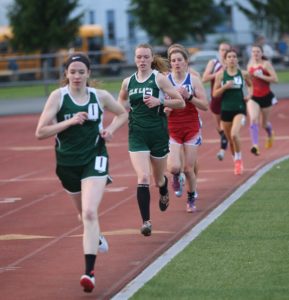 Guyette finished third in the 200-meter and was part of the seventh-place 400 Relay team for Montrose teaming with Tangi Smith, Caroline Stack, and Makenzie White.

Susquehanna’s McKenzie Rhone was sixth in the 300 hurdles along with a seventh place finish in the 200-meter and Forest City’s Rachel Korty earned fourth place in the 1600 and sixth in the 3200.

Other locals earning medals included Shyanne Bennett of Elk Lake for a fifth place finish in the 3200-meter and her teammate Sadie Bosscher who claimed seventh in the 1600-meter. Mountain View’s Kathryn Long finished eighth in the 3200-meter.