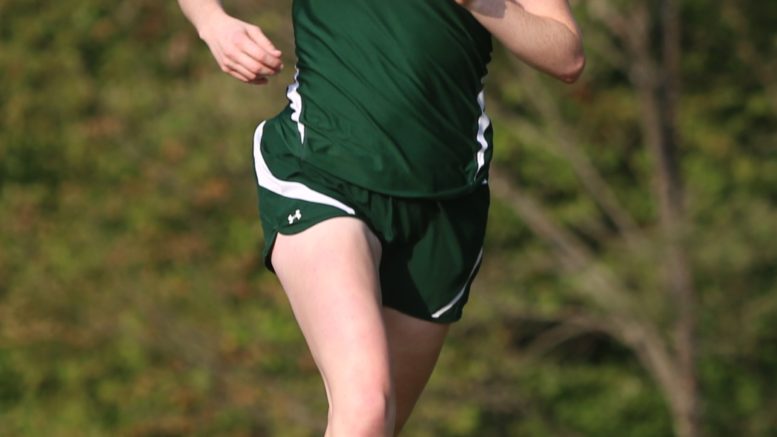 Elk Lake's Krista Jones separates on her way to capturing first place at the meet held at Montrose High School on September 10. Jones finished in 19:21 to win her first Lackawanna League meet of the season. PHOTO BY ED KING

Elk Lake’s Krista Jones nipped Forest City’s Rachel Korty by two seconds to claim in a matchup of two of the league’s top runners and contenders for next month’s District II race.

Jones finished the 3.1-mile course in 19:55. She and Korty were not the only two locals to fare well as the top six spots were occupied by county runners.

Paige Brewer and Hannah Perkins finished third and fourth and were joined by sixth-place finisher Stephanie Summerville to lead the Lady Meteors to three wins.

Sadie Bosscher was fifth and, along with Jones, led Elk Lake to wins over Western Wayne and Forest City but dropped their match up with Honesdale.

Brewer, Perkins, and Summerville were joined in the top 15 by Elizabeth Chidester and Annika Bixby as Montrose downed host Western Wayne, Honesdale, and Forest City.

Despite not placing a runner in the top 15, Blue Ridge also picked up a pair of wins edging Western Wayne and Forest City and losing to Honesdale. Top finishers for Blue Ridge were Gia Fiore and Lily Bleck.

On the boys’ side at Western Wayne local runners also fared well. Montrose’s Nick Coy and Sam Stashko finished one and two to lead the Meteors to three wins.

Elk Lake picked up wins over Western Wayne and Forest City. Noah Staff led the way with a third-place finish and was joined in the top 15 by teammates Dylan Way and Matt Miller.

Jack Condron led Blue Ridge to pair of wins over Western Wayne and Forest City with his fourth-place finish.

At McDade Park in Scranton, Mountain View and Susquehanna each earned wins over host West Scranton while both suffered a pair of losses to Mid Valley and Scranton.

Austin Gow’s seventh-place finish was the top spot earned by local runners as he led Susquehanna to a 22-35 win over West Scranton. Mountain View edged the Invaders 25-30.

On the girls’ side at McDade Mountain View and Susquehanna each picked up wins over Mid Valley and West Scranton.