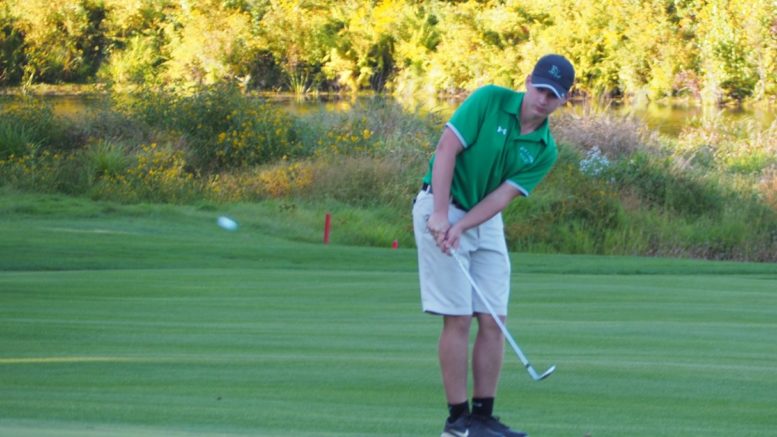 Elk Lake's Jason Mowry chips during Elk Lake's match with Dunmore at Elmhurst Country Club on September 19. The day before at Elmhurst Mowry was the lone Susquehanna County golfer to qualify for the District II tournament. PHOTO COURTESY/TAMMY MOWRY

Last Wednesday, Elk Lake’s Jason Mowry was the only local golfer to qualify for the District II championships shooting an 82 at Elmhurst Country Club.

The PGA-level greens proved problematic for most of the field as only 15 players made the cut to qualify.

Monday (Sept. 23) was the last scheduled match for the majority of Lackawanna League teams.

In match play last week Blue Ridge rebounded from a shutout loss to Scranton Prep to claim two matches and even its record at 6-6-1.

A day after the District qualifier Blue Ridge edged Lakeland 5-4 as Tyler Hillard, Andrew Scott and Preston Perry each picked up a pair of wins in the final two groups.

Hillard defeated Aaliyah Matylewicz 4-2 and combined with James Barbour to win the Better Ball one up in group two.

Scott was a one up winner over Ethan Roberts and combined with Perry to win Better Ball 5-4. Perry defeated Robert Burgio 5-4 in their individual match.

Barbour and Kyle Spoor won on the final hole and garnered two wins for Blue Ridge as the Raiders defeated Montrose 6-3 at Golden Oaks.

Barbour finished one up over Alex Warriner and combined with Hillard to take their Better Ball 2-1 over Warriner and Cole Jones. Hillard was a 3-2 winner over Jones.

In the final group, Spoor downed Jared Corson one up and combined with Joe Curtis to take the Better Ball over Corson 2-1. Curtis also picked up a forfeit win.

Montrose swept all the points in the second group as Kaiden Corson edged Scott 5-4 and combined with AJ Dovin to claim the Better Ball 3-2. Dovin won 2-1 over Perry.

Warriner defeated Ben DeMark 4-3 and Jones was a 5-4 winner over Jack Kowalewski in the first group. Warriner and Jones won the Better Ball 5-4.

In group two Kaiden Corson edged Robert Hertzog 3-2 while Dovin got the better of Johnny Johnson 5-4. The pair combined to take the Better Ball 5-4.

Jared Corson defeated Charlie Mordent 5-4 and Mason Dieck picked up a forfeit win in the final group. Corson and Dieck edged Mordent in the Better Ball 5-4.

Montrose fell to Carbondale 7-2 as the Charges swept all three Better Ball matches.

Jones and Kaiden Corson picked up individual wins for the Meteors. Jones downed Brian Salitsky 2-1 and Corson was a 3-2 victor over Tiania Arnese.

Forest City continued its surge up the league standings as the Foresters defeated Lakeland 6-3 as Henry Nebzydoski, DJ Heath, and John Lesjack each had a pair of wins for Forest City.

Nebzydoski beat Dante Brunori 5-4 and combined with Abby Swegel to win the Better Ball over Brunori and Ethan Roberts by the same margin.

In the middle group Heath defeated Don Connelly 3-2 and won the Better Ball 2-1 with Hunter Langman.

Lesjack led the final group earning a 5-4 win over Blair McAlla and collecting the Better Ball with Robert Swegel as they defeated McAlla and Christian Winkler one up.

The week got tougher for Forest City as they were shutout by Dunmore and fell 8-1 to Riverside.

Heath was the lone victor firing a 44 and had a birdie on number three at Pine Hills Golf Club as he edged Collin Kneiss one up.

Elk Lake received a pair of wins by Mowry as they fell to Dunmore 7-2.

The senior duffer took his match with Will McHale 4-3 and combined with Nate Warriner to take the group one Better Ball one up.

Mountain View avoided a second straight shut out when Alex Empet picked up a forfeit in the final group as the Eagles lost to Scranton Prep 8-1.

Be the first to comment on "Mowry qualifies for D2 Championships"