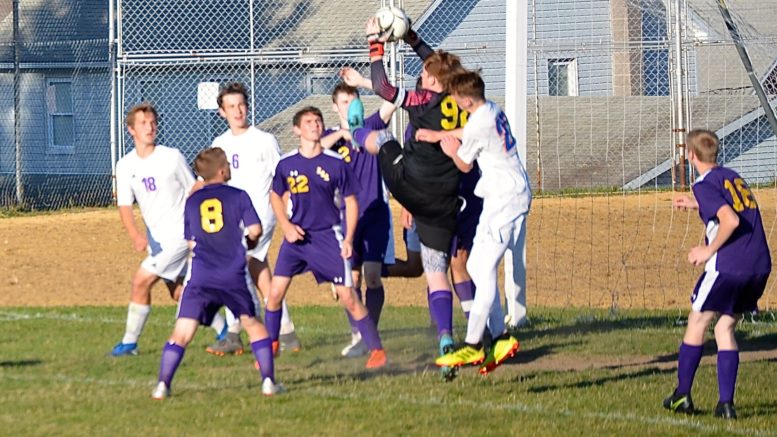 Forest City Goalkeeper Carm Gigliotti soars above the pack of players to retrieve the ball ahead of Mountain View's Josh Tyboroski (27) during the Foresters game with Mountain View. Gigliotti had 10 saves to shut out Mountain View 2-0. PHOTO COURTESY TRACY HARTMAN

Forest City fell from the ranks of the unbeaten but still maintained a share of the lead in Lackawanna League Division II boys’ soccer.

Forest City used two second half goals by Jay Lipko to edge Mountain View 2-0 and remain unbeaten heading into their showdown with Gregory the Great.

After a scoreless first half, Lipko took a pass from Brady Hentschel 15 minutes into the second stanza for the game’s first score. 13 minutes later Jacob Gray found Lipko for an insurance goal.

Corey Daniels cut the early deficit in half with a goal off a Lipko assist at the 11:40 mark but the Foresters could not manage another goal the rest of the way.

The Highlanders outshot Forest City 18-7 as Gigliotti recorded 11 saves for the Foresters. With the loss Forest City fell into a tie with Gregory the Great for the Division II lead.

Earlier in the week Forest City beat Old Forge 5-1. Statistics were not made available.

Zach Polovitch ended the scoring drought three minutes into the second overtime to lead Mountain View to a 3-2 home win over Blue Ridge.

Mountain View jumped out to an early lead as Mike DeWolfe scored in the game’s first minute and was followed up seven minutes later when Nathan Ofalt found the back of the net.

Blue Ridge battled back when Ryan Mills cut the deficit with a goal off an assist from Garrett Conklin. Gerald Welsted knotted the score at the 28-minute mark when he took a feed from Mills.

Blue Ridge got back on the winning track with a 6-0 win over West Scranton as Mills and Ben Bleck each had a pair of goals.

Bleck scored on a Mills feed midway through the first half and Mills scored unassisted a few minutes later. Conklin added a penalty kick just before halftime and Blue Ridge took a 3-0 lead into intermission.

Mills opened the second half scoring on a pass from Bleck three minutes in and Cameron Franks scored off a Conklin assist 11 minutes later as the Raiders put the game out of reach. Franks assisted Bleck on his second goal for the final tally.

Despite outshooting West Scranton 12-2 Elk Lake failed to find the back of the net in their double overtime tie with the Invaders.

Warriror Goalkeeper Caden Ramey had one save.

Montrose had a scoring drought of their own during the week.

Owen Morgan’s hat trick led Lakeland to a 6-1 win over Montrose. The Meteors avoided the shutout when Aiden Birchard took a Jason Smith pass and put it in the goal with just under two minutes to play.

On Thursday Kolbin McDonough’s goal 16 minutes into the second half was the game deciding score as Montrose fell to West Scranton 1-0.

Be the first to comment on "Depite loss, FC boys’ maintain division lead"