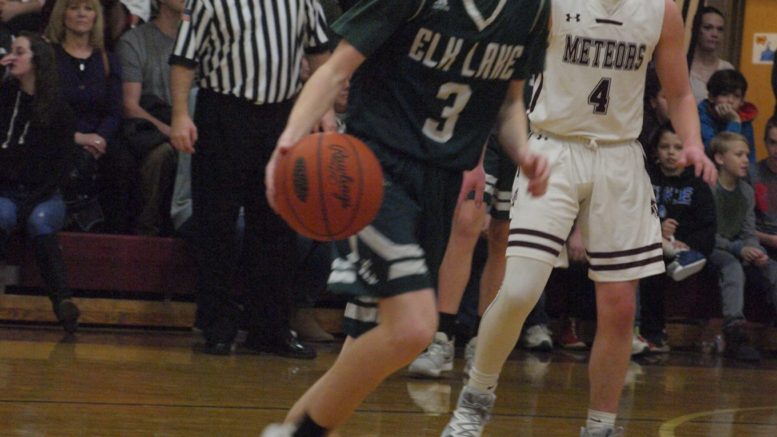 Elk Lake’s Trever Graham (3) looks for a gap to drive during the Warriors’ victory over Montrose. Graham finished the night with 22 points including five three-pointers. Photo courtesy of Tammy Mowry 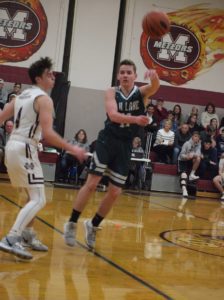 Trailing 5-4 after a sluggish first quarter Susquehanna took the lead in the second quarter as Garrett Decker and Jakub Tomczyk combined for 11 of the 16 Saber points and Susquehanna took a 20-18 lead into the half.

After intermission, Susquehanna frustrated the Trail offense while maintaining enough offensive rhythm to take a 30-23 lead into the fourth quarter.

In the final period Sophomore Spencer Beamer took over going 9-13 from the free throw line and scoring all 11 of his points in the quarter to seal the victory and leaving Trail needing help from one-win Montrose to keep their title hopes alive.

“The key was our defensive effort,” said Susquehanna Coach Lawrence Tompkins. “Gavin Baker guarded Helbing primarily, but we had multiple guys ending up guarding him (Helbing) due to the game flow.”

Decker led Susquehanna with 13 points while Beamer and Tomczyk each finished with 11 to lead the Saber attack.

Elk Lake travelled to Montrose and were not gracious guests on Senior night throttling the Meteors 66-46.

Matt Mowry and Trever Graham each scored five points as the Warriors opened up a 15-8 lead.

Elk Lake extended the lead in the second quarter as Brant Marshall broke free for six points in the paint and Graham knocked down a pair of threes to lead the Warriors to a 31-15 halftime lead.

Graham didn’t cool off after the break knocking down another pair of long-range bombs and Matt Mowry added seven as Elk Lake put the game out of reach 52-29. Montrose’s offense received a lift from Sam Stashko and Connor Watkins who each scored six in the quarter.

Graham finished with 22 points including five three-pointers while Marshall and Mowry each had 14 and Jacob Gustin chipped in with nine to lead Elk Lake. Stashko had 15 to lead Montrose while Watkins finished with 14.

Mountain View assumed the driver’s seat in the division overcoming a sluggish first half to outscore Forest City 35-26 in the second half and come away with the 45-41 win.

Trailing 15-10 at the half, the Eagles cut the lead to one by tripling their output of the first half to trail 26-25 heading into the fourth quarter.

In the fourth quarter Mountain View’s length proved to be problematic for Forest City and Ryan Henke iced the game with a pair of late free throws to set up Thursday’s clincher with Montrose.

The Raiders raced out to a  31-15 lead by halfime and the Chargers responded after halftime with a 14-10 advantage to cut the lead to 41-29.

Carbondale used that momentum to outscore Blue Ridge 28-22 in a wild fourth quarter, but Blue Ridge hit enough free throws down the stretch to prevail.

On a Monday night LIAA Division III/IV crossover Old Forge used the momentum of a big first quarter to roll away with a 63-39 win over Montrose.

Leading 14-5 after the first quarter, Old Forge pushed the lead to 16 at halftime despite nine points from Montrose’s Trent Leonard to take a 36-20 lead into the locker room.

In the second half Montrose kept in check as Old Forge won the final two quarters 27-19.

Leonard led Montrose with 10 points and Connor Watkins chipped in with nine.

Be the first to comment on "Susquehanna plays spoiler, Eagles rally to top"