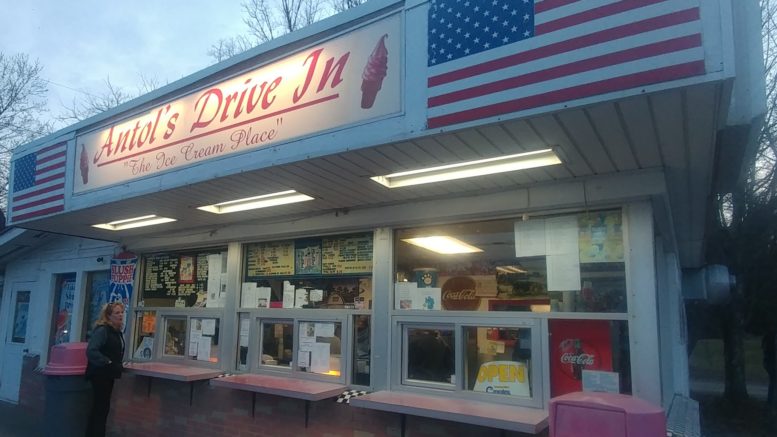 Minutes after the “We’re Open” sign popped up in the window, the sound of screeching brakes and cheerful yelps filled the air on Route 29 in South Montrose.

Then the text messages and social media posts kicked in.

Minutes later the word was out all over town: “Antol’s is open!”  In March.

Amidst all the recent bad news with COVID-19, school closures and hapless parents trapped at home with kids but no sports on TV, at least one thing remained constant and even came a little early this year.

“After I put the ‘Open’ signs in the window, we had customers in five minutes,” said current owner Dave Antol, who has worked the same counter since he was 10.  This year Antol’s opened a few weeks earlier than its traditional early April start.

It could have been because of the combination of daylight savings time and this year’s leap year that the vernal equinox – the day (March 19 this year) the sun was exactly above the equator marking the beginning of astronomical spring — the Northeast had its earliest spring in 124 years.

To Dale Howell of Springville it didn’t matter.  He wasted no time in ordering his longtime favorite:  a medium twist of soft serve vanilla and chocolate ice cream.

“Excellent,” he said, when asked what he thought of Antol’s early opening.

“I’ve been coming here since the late 70s,” Howell said.

For many, the day Antol’s opens is, much like the sudden appearance of the tiny purple crocus flowers on your lawn, a harbinger of the arrival of spring

But Antol said that after 58 years it’s time for him to step back and relax a bit.  He and the prospective new owner, Jim Krupinski, decided to open a few weeks earlier than Antol’s traditional early April opening, in part because of the recent mild weather and in part to give Krupinski a bit of a running head start.

“I’m primarily in the process of selling the business.  They’re leasing it this year and I wanted them to get started early because the weather has been good,” Antol said.

How did he know the reaction would be so fast and so strong?

“Really, overall, people are looking for a change.  They’re tired of the winter, they want to get out,” he said.

Krupinski hopes to eventually buy the business after having worked in the emergency medical transport field with the Montrose Minute Men ambulance service.

“I’ve been a loyal customer here for many, many years and it just intrigued me; something I wanted, something I thought I’d try,” Krupinski said.

“Business has been good so far this afternoon,” he said.

The best sellers are burgers and, of course, ice cream cones.

In that aspect, the years haven’t changed much.

“Back in the days where I took two milk crates and I stood on top of the milk crates and then I raised my hands up into the cash register and made the change for the people,” Antol said, recalling.

The elder Antol then moved his business across Route 29 to run a Tastee Freez at the current location of Antony’s Restaurant.

Then, in the late 1970s, he bought the former J&R’s Drive-In just north of the intersection of Route 29 and Ridge and Bendix Roads.

The location that is now Antol’s has long been a familiar stop for locals.

“Jack had the best steak sandwiches,” Arnold said.  “They were so, so good.  And honey dipped chicken & fries.”

“I worked there making ice cream cones, hot fudge sundaes in the summer.  It was one of my first jobs,” Arnold said.

Antol said that he and his wife, Joan, plan to become snowbirds who will flee the cold weather for warmer southern climes.

“I just want to get away when it’s really cold out,” he said.

But first he wanted to make sure Krupinski was in good shape.

“It’s a big undertaking here.  I don’t know if he realized what it takes to get the place started.  He soon found out,” Antol said.

Antol said he will most miss working the same counter he started at all those years ago.

“I enjoy the people that come.   All my clientele.  All my friends,” he said.