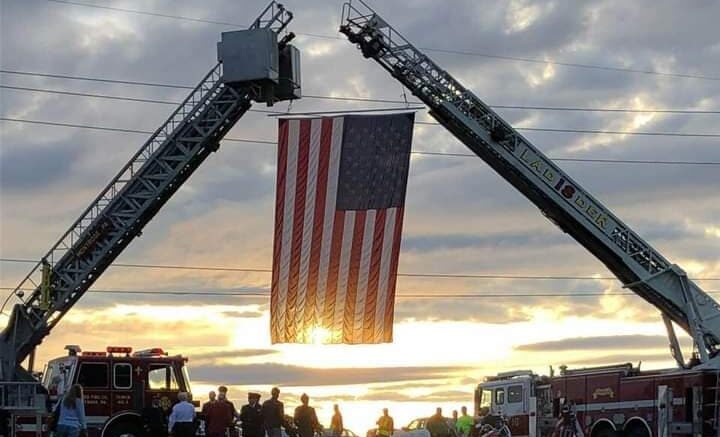 A large American flag was suspended over by fire company ladder trucks over the entryway to the Daniel Crisman Memorial Park for the ceremony commemorating the 19th anniversary of the Sept. 11 terrorist attacks. PHOTO BY PAT FARNELLI 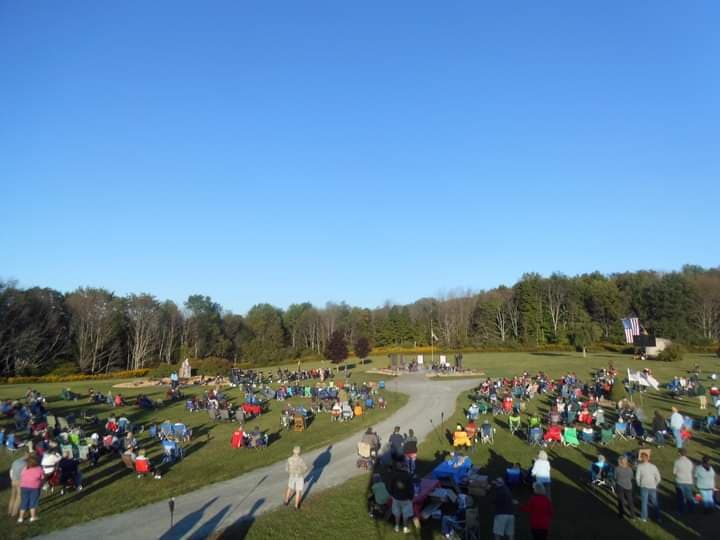 A bird’s eye look at the crowd gathered at the September 11 Memorial Service held at Daniel Crisman Memorial Park in South Montrose. PHOTO BY PAT FARNELLI

For 19 years, Debbie Crisman has been creating and curating a memorial in South Montrose for her son Danny and the others who died on September 11, 2001. The broad field on Ridge Road with its flags, gardens, and granite memorials of those slain at the twin towers in New York City, the Pentagon in Washington, D.C., and a field in Shanksville, PA requires significant upkeep and preparation for the annual service. Crisman mows with her headphones playing a list of tunes beginning with “Danny Boy” and “Amazing Grace”, her favorites.

“This year would be the first time I’d hear Hayden Brunges sing “Danny Boy” since Danny’s memorial service in October 2001, so I realized holding back the tears was not going to be easy. Thank you, Marcha Lott Brown, for taking my hand. I am truly blessed with amazing friends,” Crisman said.

She noted that she has a clock in her bedroom that stopped 19 years ago at 9:18 a.m. Marcha Lott Brown can verify this. “The pendulum continues to move, though I have never changed the battery. It just chimed (this morning) nine times.”

The National Anthem was sung by Brunges with Andy Vaccaro. Pastor Bob Kadlecik noted that Vaccaro, a first responder, was first on the scene after Brunges’ horrible car accident that nearly cost him his life. Later in the service, Vaccaro sang “Amazing Grace.”

The ceremony’s keynote speaker, Charles “Sam” Faddis, served 20 years in the Central Intelligence Agency as an operations officer, holding positions as a department chief at the CIA’s Counterterrorism Center in Washington, D.C., and as a chief of station in the Middle East. He is the author of Beyond Repair, a scathing critique of today’s CIA, and the coauthor of Operation Hotel California, which recounts how he led the first CIA mission into Iraq in 2002 in preparation for the pending invasion.

Faddis said that he wanted to talk about resolve. “In a culture of immediate gratification, resolve is the most critical thing for this nation. it has always been, but especially right now it is an essential quality for leadership.”

He recounted a story about his friend named Dutch who was horrifically wounded on the battlefield, shot in the eye, yet still managed to save the others in his vehicle; later, he was shot in the main artery of his leg and left for dead by Afghanistan soldiers, but managed to get up and heroically reach safety while covering others from enemy fire. He said that his friend Dutch is still serving on the front lines today.

He told another story about Theodore Roosevelt and his son, Kermit. The government of Brazil suggested that Roosevelt accompany famous Brazilian explorer Cândido Rondon on his exploration of the previously unknown River of Doubt, the headwaters of which had only recently been discovered. Roosevelt, seeking adventure and challenge after his recent electoral defeat, agreed. Kermit Roosevelt, Theodore’s son, had recently become engaged and did not plan on joining the expedition but did on the insistence of his mother, in order to protect his father. The expedition started in Cáceres, a small town on the Paraguay River. They traveled to Tapirapuã, where Rondon had previously discovered the headwaters of the River of Doubt. 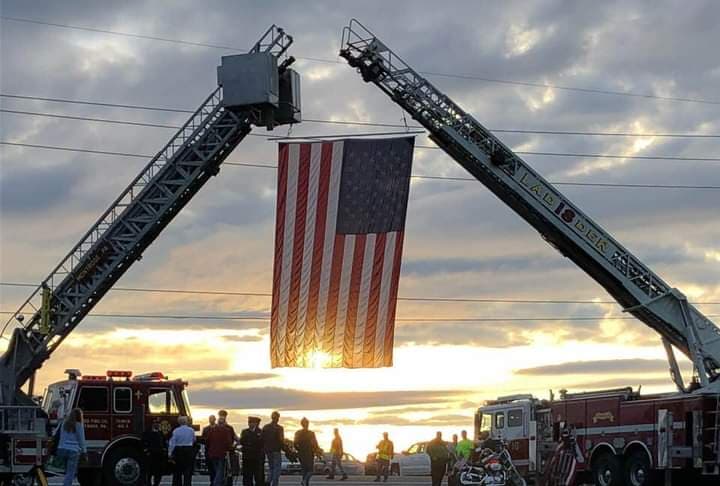 A large American flag was suspended over by fire company ladder trucks over the entryway to the Daniel Crisman Memorial Park for the ceremony commemorating the 19th anniversary of the Sept. 11 terrorist attacks. PHOTO BY PAT FARNELLI

They reached the River of Doubt on February 27, 1914. The Roosevelts, Colonel Rondon, American naturalist George Kruck Cherrie, and 15 Brazilian porters, then started down the river. Insects and diseases such as malaria weighed heavily on just about every member of the expedition, leaving them in a constant state of sickness, festering wounds and high fevers. The heavy dug-out canoes were unsuitable to the constant rapids and were often lost, requiring days to build new ones. The food provisions were ill-conceived forcing the team on starvation diets.

The native Cinta Larga tribe shadowed the expedition and were a constant source of concern. By the time the expedition had made it only about one-quarter of the way down the river, they were physically exhausted and sick from starvation, disease, and the constant labor of hauling canoes around rapids. By its end, everyone on the expedition except for Colonel Rondon was either sick, injured, or both. Roosevelt himself was near death, having received a gash in his leg that had become infected, and the party feared for his life each day.

Kermit Roosevelt said: “We’re gonna die or we’re not gonna die, I can’t stand up.” Then he looked up and saw his father standing up with a rifle in his hand, heading upstream. A few years before this, he had been about to give a speech while President and an assassin shot him in the chest. He still gave his speech, and the bullet had never been removed from his chest, Faddis noted.

Faddis concluded, “As a nation, we have to demonstrate that resolve. We have to do that work.”

Soloist Hayden Brunges sang all the verses of “Danny Boy” while participants reverently held lit candles and listened to his lovely voice wend through the moving lyrics. Too soon, the bagpipes began to bray “Amazing Grace.”

Kadlecik offered a benediction, praying, “God, help us to live out little solutions. Help us to comfort the grieving, give hope to the despairing, run to those in need, honor those who have died.”