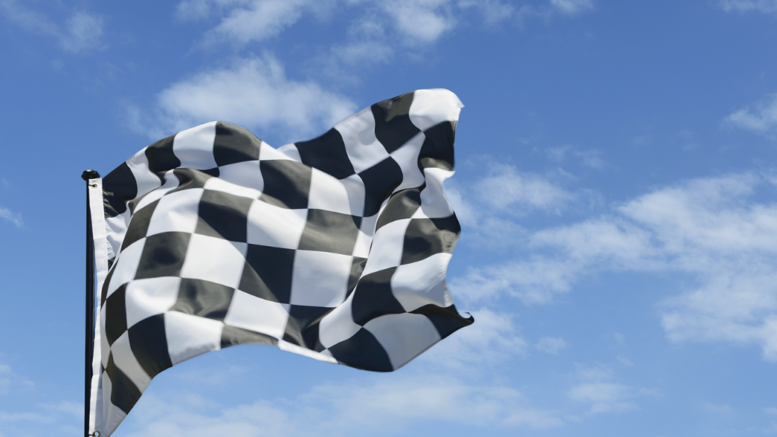 On a perfectly cool Friday night with over 100 plus cars sitting in the pits, excitement and anticipation filled the air. There were track championships on the line in several divisions. The night was filled with solid racing and several great competitive features as the champions looked to wrap up their titles.

The SUNOCO Race Fuels and Insinger Performance Modifieds put on an intense show to wrap up the regular season. The battle was on for former track champion Brian Malcom who was second in points going into the night trailing points leader Brett Tonkin by 124 points.

Jamie Bedford and Butch Getz lead the herd of 28 roaring Modifieds to the green flag. Getz got the jump on Bedford to take the lead, however it would not last long as the caution flag came out.

A quickly advancing Malcom was making his way through the pack after having a minor setback on the restart. Working on the outside of Tonkin, the 119 was trying to make his move into eighth place.

The second caution of the night came on lap ten with a car being stuck on pit road after trying to head in on their own. Getz would once again take the lead on the restart.

Just a few places back, Malcom was battling with Bedford for the sixth position and points. Lap 13 brought out the caution. Worthing would take the lead on the restart with Getz and Creeden battling door to door for second, however before the lap could be completed, Schaffer would be turned around.

A single file restart allowed Worthing to pull ahead and start making his way through lapped traffic. Disaster struck for the leader as the 163 car would slow on the low side bringing out the caution and moving Creeden to the lead. Worthing headed to the pits with a broken torsion bar.

Creeden led the pack to the checkered flag. He is known as the tough guy on the track, but he is known to help fellow drivers, such as lending Byron Worthing a car so he could run. “I never want to see the veterans retire early, so I try to help”, said Creeden. For the 16x ride it has been a rough season. Despite the shortened season it has seemed everything and anything still went wrong. Creeden pointed out the track was great, but it was worrisome in turn three and four since you could not see the inside wall. The 16x was adamant in his first points paying feature win.

The Penn Can Speedway 2020 Track Champion for the Modifieds is Brett Tonkin. Tonkin stated that winning here was a dream since he has been at this track his whole life watching his father run.

Consistency was the main factor in the win for the 15/9 car. He made up some points in the triple 20 features and that helped him get to this point. Tonkin said, “We have been running great since Memorial Day and it just keeps continuing.”

The dominant lane last night for the champion was the bottom side and he made it work enough where Brian Malcom would not gain enough points to beat him.

Randy Brokaw and Dusty Barton brought the field to the stripe with Brokaw holding the lead in turn one. The start would not hold however as point leader Mike Schane and Brandon Loucks spun in turns 3 and 4. This set the stage for a rough night as Schane would have to start from the tail end of the field.

On the restart Brokaw and Barton fought hard for the lead down the backstretch with Brokaw taking sole possession of the leading spot. Elsewhere Brett Tonkin and Ray Leonard traded sixth back and forth while Mike Schane made his way back up through the field.

A Lap 17 caution led to a  restart that would not go well for the point leader. Mike Schane came to a stop in turn 3 due to a mechanical failure. The final few laps would be action packed as Leonard, Brokaw and Miller fought hard for third. A final caution on lap 22 for a Dan Soloman spin did not make much difference for Zacharias. He and Tonkin would split away as third saw Brokaw beat Miller to the line and Leonard rounded out the top 5.

Jimmy Zacharias has a great last few weeks, from becoming the second person in track history to win back to back features in a single night to winning his sportsman feature and being crowned track champion for the sportsman class.

Zacharias had transitioned from pavement racing to dirt and overall he has 19 track championships, but this is his second on dirt. The 71 machine is set up exactly right for drier tracks and it showed in the recent weeks.

Zacharias said, “We saved the best for last and consistency was key year-round.”

With three competitors mathematically in contention for the Insinger performance street stock title the action did not disappoint. Tyler Yeagle entered the night with an 80-point lead over Doug Polhamus and Steve Polhamus another 23 points back for third.

Doug Polhamus would start from the pole with Travis Brockner completing row 1. Polhamus would get a good start as Brockner was immediately challenged for second by Shane Wolf Jr. and Jon Carpenter.

Yeagle’s strong run would prove to be too much in the Championship chase for the Polhamus family to overcome. Jon Carpenter crossed the line first followed by Yeagle, Boynton, Jason Butler, and Wolf Jr.

After taking a break from racing, Jon Carpenter and his 312 ride came back with a punch. Carpenter stated that running at the speedway is one of his favorite tracks. The lap five caution gave him the help that he had needed to get to first and said, “the track is great, there was a cushion and you could pick and choose your lane.”

Track Champion Tyler Yeagle had stated “This is incredible! I feel like an accomplished racer, we have won races before, but this is the first time we won the whole big picture.” The 33 had some competition come feature time, but Yeagle knew he just had to have a clean race. The Yeagle Farms driver had pointed out “I’m my biggest critic. Did I want to bring home the feature win? Yes, but I was content bringing home second.”

Factory Stocks featured the only points battle across all divisions to already be locked up coming into the night. Tommy Groover has been the definition of consistency and dominance this season collecting every feature win bar one. Holding a more than 200-point lead, Groover’s goal for the night was to collect the bounty placed upon him.

Groover has been solid all year and says that he enjoys having to work his way through the field for the win. This is his third track championship in three years and has had a bounty on him all three of those years. Winning all the features this season but one has been a great accomplishment. Groover states, “This year’s goal is to come out and win King of the Can, I really want that win.”

Casey Plummer completed the win, followed by Robinson, Gray, Ali Scutt, and Lattner. It was the first 600cc modified win for Plummer, a former Modified competitor. The veteran driver talked about how this one was all about “dusting the cobwebs off from running the mods”. Points Champion

Davis was ecstatic that “he and his team put all the pieces together” to bring the championship home. For the championship team it is all about family as Dana thanked his mom, dad and everyone who works on the C.K. contracting team. The new champion “felt the weight taken off his shoulders” and still could not believe he was now a Champion. It was surely a memorable night for the 600cc Modified Champion team.

The four-cylinder points battle was within reach for Nick Kennedy coming into the night as he trailed point leader Josh Wilder by 40 points at the drop of the green. Kennedy would come out with the lead on lap 4.

A lap 12 caution for David Fox Jr. going around in turn 1 erased Kennedy’s lead and brought the field together for a 3-lap shootout. A brief bit of smoke under caution from Kennedy’s car excited the crowd but would dissipate quickly. Point leader Josh Wilder would be lurking in fourth on the restart, sitting where he needed to be to keep Kennedy just out of reach of the points title. Kennedy picked up the win; he mentioned it was a tough season as he tried to roll with the punches and had a few nights of bad luck.

After back to back feature wins to close out the points season Kennedy will have momentum on his side. The driver has had a remarkably successful career at the Penn Can speedway and looks forward to defending his King of the Can title in the upcoming weeks.

A thrilled Josh Wilder came into the night with a 40-point lead and knew where he had to finish from the drop of the green to take the championship. Wilder hung back from the battles for second and third keeping his car’s nose clean and getting by the cars he needed to for a top five finish. “The Doughboy” collected his first title at the speedway in his five-year race career. Consistency was the key factor for Wilder as he mentioned his only DNF of the year came in week 2. The champion summed up his title saying “COVID 2020 has been crazy but this is crazier”.

The young drivers of the Junior division were back in action for the last regular race in the season. We would see Josh Landers and Liam Jackson lead the field of five to the green. Landers had gotten the early jump over the group and started pulling away from Jackson who was in second. Landers would see the checkers fly with Jackson not too far behind.

Sept. 18 -Patriot Tour, finishing B-Main & A-Main from Aug. 28 rain-out; along with making those two races up, they are putting on another entire show.

Running beside the 360 sprints, we will have the Modifieds, 602 Crate Sportsman, Street Stocks, 600 ccModifieds and the Junior Division.

For more information on upcoming events find us on Facebook under Penn Can Speedway or at www.penncanspeedway.net.