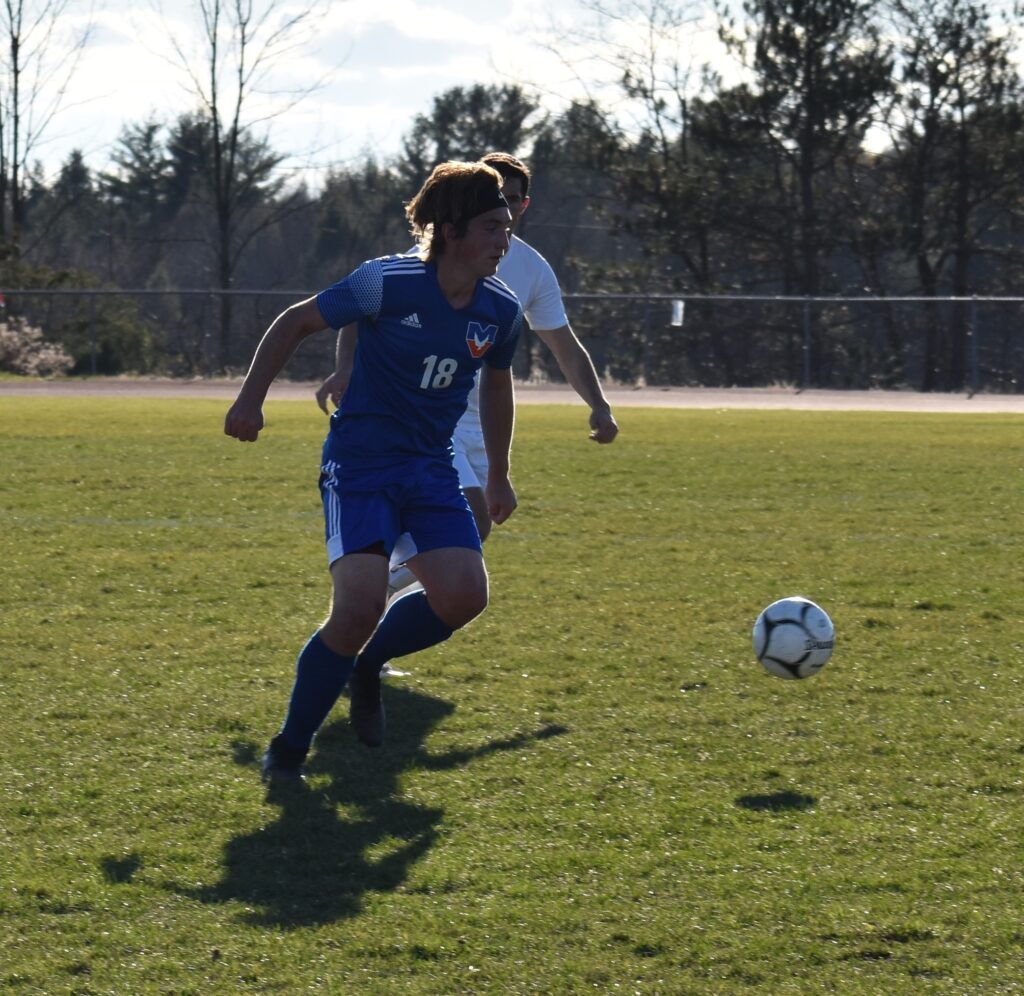 Mountain View’s Caleb Eichelberger pursues the ball during the Eagles’ playoff game with Millville. Eichelberger overcame a bout with Covid-19 and dedicated the season to his father who died from pancreatic cancer in March. PHOTO BY COREY GESFORD

The Mountain View soccer player marched through two tough adversaries to join his teammates on the District Title victory stand earlier this month and fulfill a special dedication to his senior soccer season.

Like most of his Eagle teammates, Eichelberger was stung by the 1-0 overtime loss to Forest City in the 2019 Class A District II final.

That game would be fuel in the offseason, a motivator to finish a goal and fulfill a destiny. It would also become significant to Eichelberger for another reason.

Caleb’s father, Randy was diagnosed with Pancreatic cancer and succumbed to the disease in March, just as the country began to experience a global pandemic.

“Sports was one of the best ways for me to communicate with my Dad,” explained Eichelberger. “That was the one thing we knew well and had a common connection through.”

Eichelberger used the sting of both losses to motivate him through the offseason.

“It really pushed me through the offseason,” said Eichelberger. “This was the first year I really dedicated myself to getting ready for the year.”

Like most athletes and their teams, Eichelberger and his teammates had to wait and see how COVID would impact their season – or if they would have a season at all.

After practices and games were given the go ahead, Eichelberger and the Eagles were cruising through an undefeated season when the brakes were applied.

COVID would affect him and his team directly.

Following a game against Western Wayne in early October the team was forced to quarantine. Eichelberger himself would test positive for the virus.

“I had a couple symptoms, a headache mostly, it didn’t seem that serious,” said Eichelberger. “I was really surprised when I found out I had it.”

With the season hanging in the balance Eichelberger and his teammates tried to keep perspective and maintain hope.

The team came off quarantine and worked its way back into shape, playing one game before the start of the District playoffs, which would end with a 1-0 loss to Dunmore.

“We worried that we would lose our edge,” said Eichelberger. “I think that loss at Dunmore was beneficial. We knew we needed to take it up a notch if we were going to win Districts.”

As they regained their edge, the Eagles gutted through the District playoffs defeating Gregory the Great in overtime and overcoming Holy Cross 2-1 to set up the rematch with Forest City in the District II Class A Final.

This year it was Mountain View’s turn to prevail in overtime and place the gold medals around their neck.

For Eichelberger it was not only a game to exact revenge, but to honor his father.

“Honestly, I cared about that game more than any game in my life,” said Eichelberger. “And when we won, it was like, ‘I did that for you, Dad.’”

A tribute to a loved one, a lesson in perseverance.