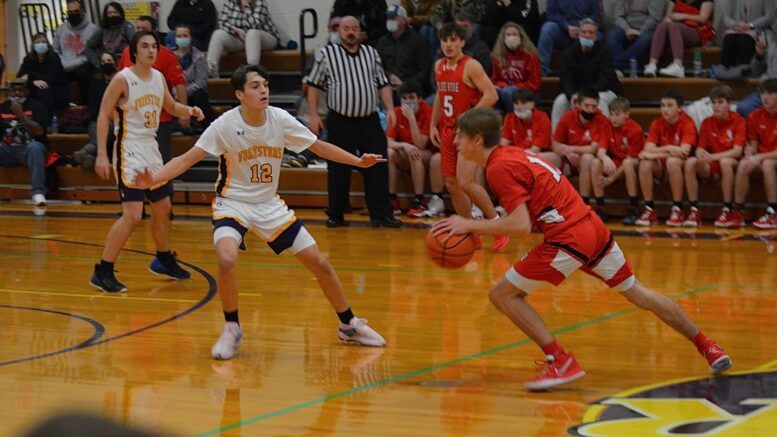 Forest City took advantage of the home court and knocked off an unbeaten Blue Ridge to create a logjam at the top of the Lackawanna League Division IV.

Heading into the week of January 24 Blue Ridge, Elk Lake, Forest City, and Mountain View entered with one league loss.

Blue Ridge remained on top with five wins followed by Elk Lake with four and Forest City with three. Mountain View is 2-1 and was idled the second half of the week as the school district moved to virtual learning until January 25.

Forest City used a big fourth quarter and cold Blue Ridge shooting to rally for a 62-54 win to knock the Raiders from the ranks of the undefeated in league play.

Trailing 28-20 at intermission Dylan Bezek scored six points while DJ Heath and Cade Hartman each added four as the Foresters roared back to knot the game at 39 headed into the fourth quarter. Connor Cranage and Carson Gallagher combined for all the Blue Ridge points.

Forest City got off to a quick start as Bezek and Heath combined for eight points and Evan Piatak nailed a three to give the Foresters a 11-5 advantage.

Blue Ridge regrouped in the second and appeared to take control attacking the rim as Cranage scored 10 points and Coleman McCain added five as the Raiders outscored the Foresters 23-9 to seize the halftime lead.

Cranage led Blue Ridge with a game-high 26 while McCain and Gallagher finished with eight points and JJ Rosa chipped in with seven.

Mountain View turned up the defensive pressure and pushed the tempo in the second quarter as Tanner Stout scored 10 points and Henke added six more as the Eagles took a 34-25 advantage into intermission.

Justin Holgash scored eight points as Montrose cut the lead to 45-37 heading into the fourth quarter. Mountain View would score first in the fourth but stall at 47 and Montrose would cut the lead to 47-44 before the Eagles regrouped and outscored the Meteors 16-7 down the stretch including a 8-11 performance from the free throw line.

Colton Stone buried his second three-pointer with 30 seconds left on the clock to give the Sabers a thrilling 40-37 win over Montrose at home.

Susquehanna jumped out early in the game holding a 12-7 advantage after the first quarter as Stone matched the Meteors with seven points.

Montrose began chipping away at the lead in the second quarter as a balanced attack outscored Susquehanna 8-7 to pull within 20-14 at halftime.

The fourth quarter was an offensive explosion as the teams combined for 30 points. Sam Stashko had nine points for Montrose and Zack Funk added five. Spencer Beamer scored five for the Saber while Stone had seven including the game-winner.

Stone finished with 18 points to lead Susquehanna while Beamer and Craig Slocum each had six points and Collin Smith chipped in with five. Stashko had 10 points to pace Montrose while Holgash and Funk finished with seven.

Cade Hartman salted the game away from the free throw line and Forest City overcame a slow start after an emotional win the night before to deny Lackawanna Trail their first win of the year with a 54-45 win.

Bezek scored five points in the first quarter but Trail’s Brycen Decker had eight and the Lions led 12-8.

Forest City’s offense began to click in the second quarter outscoring Trail 17-9 behind two treys from Evan Piatak and four points each from Bezek and DJ Heath.

With Forest City leading 25-21 at intermission both teams added eight points in the third quarter as Bezek added five points and Piatak connected one more time from deep.

Bezek led Forest City with 18 points and Hartman finished with 11 while Piatak and Heath each chipped in with nine.

Blue Ridge broke open the game in the second quarter and outscored rival Susquehanna 38-14 over the middle quarters to roll to a 67-29 win.

The Raiders led 13-11 after the first quarter but erupted for 21 points in the second stanza as Coleman McCain scored all nine of his points. Blue Ridge Susquehanna to five points while forcing eight turnovers to take a 34-16 lead into halftime.

The Warriors jumped out to a 24-10 lead after one quarter behind seven points from Wyatt Casselbury and two threes from Trever Graham.

Riverside gained the lead in the back and forth first quarter behind 12 points from Frank Antonnacci to offset 10 combined points from Matt Mowry and Trever Graham and led 16-13.

The Vikings seized control in the second quarter with a spurt in the middle of the quarter as Matt Godlewski scored seven points and Riverside contained the high-scoring Mowry to lead 31-21 at intermission.

In the fourth Riverside slowed the game down and held Elk Lake to four field goals to prevail. Graham led Elk Lake with 10 points while Mowry, Caden Ramey, and Jake Gustin finished with eight and Wyatt Casselbury chipped in with six.

Billy Hazleton took a pass from his brother Antonio and hit a layup at the buzzer to nip Forest City 33-31 in a Lackawanna League Division III/IV crossover game.

With Forest City playing for the third day in a row the fatigue was evident as Forest City led 3-2 after one quarter.

With a little more life in the second quarter Forest City took a 13-11 lead into halftime as Dylan Bezek scored seven points.

Lakeland evened things up in the third quarter outscoring the Foresters 11-9 as Collin Bailer scored six points for Forest City.

In the fourth the teams went back and forth DJ Heath scoring all nine points for Forest City before Hazleton’s heroics.

Heath’s nine led Forest City while Bezek finished with seven and Piatak and Bailer chipped in with six each.

Elk Lake extended a nine-point lead and pulled away from Wyoming Seminary behind eight fourth-quarter points from Wyatt Casselbury to capture a 62-46 nonleague victory.

Seminary chipped into the lead in the third quarter outscoring the Warriors 13-11 as Phil Evans and Isiah Stull combined for nine points.

Leading 42-33 Casselbury took over in the fourth quarter and Mowry added seven to pull away.

Mowry finished with 21 points and 11 rebounds to lead Elk Lake and Casselbury had 15 points. Ramey added nine and Graham chipped in with eight.

A slow start haunted Susquehanna as the thirteen-point first quarter differential proved to be the difference as Carbondale defeated the Sabers 67-54 in a preseason make up.

Jaymier Allen scored 14 of his team high 21 points in the first quarter as the Chargers opened with an 18-5 advantage over Susquehanna.

The Sabers bounced back in the second quarter outscoring Carbondale 20-16 as Spencer Beamer scored five points and Craig Slocum and Cooper Payne each added four to cut the Charger lead to 34-25 at halftime.

Susquehanna cut the lead to eight in the third quarter as Colton Stone scored seven points and Slocum added four for a 48-40 deficit headed into the fourth quarter.

Carbondale went 6-8 from the free throw line including a pair of bonus shots to thwart a Susquehanna rally. Stone added 12 more points in the quarter to finish with a game-high 23 points. Beamer finished with 11 points and Slocum added eight.