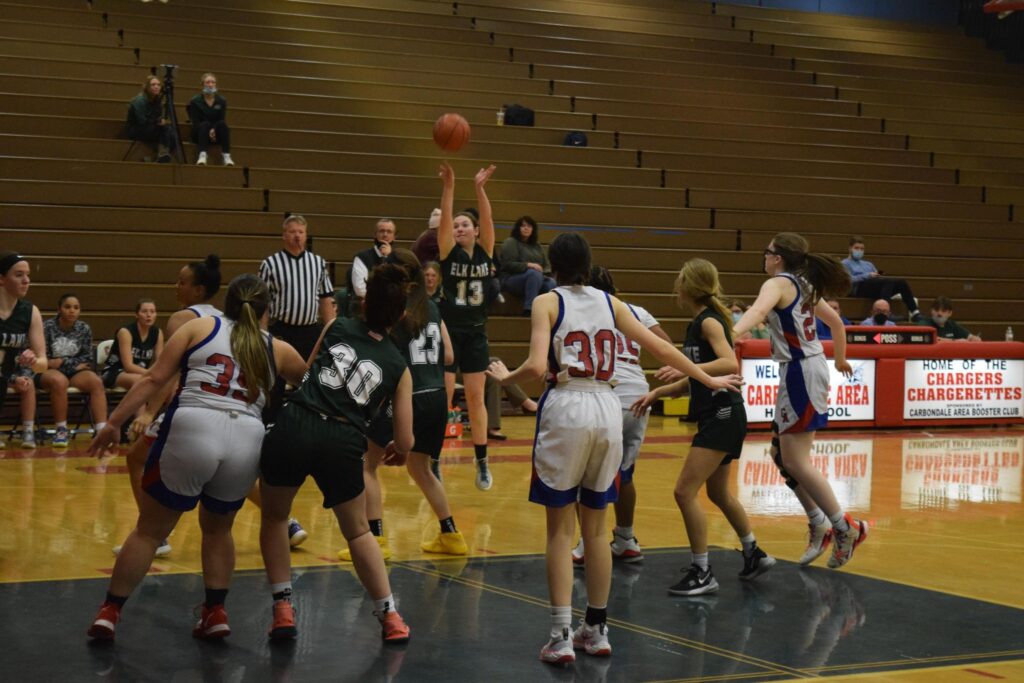 Montrose picked up a league win and followed with a non-league victory on the road less than 24 hours later while Elk Lake survived a scare and kept pace with the Lady Meteors to highlight a heavy week of action for girls’ basketball teams.

Haley Pompey scored seven of her game-high 17 points in the third quarter and Montrose pulled away in a 46-23 exhibition victory over North Pocono.

Montrose opened with a 10-6 advantage in the first quarter as Pompey led the way with six points. The teams played even with each scoring nine in the second stanza to give Montrose a 19-15 lead at the half.

Pompey was aided by Tangi and Aspen Smith who combined for 11 points and the Lady Meteors extended their lead to 37-21. Mia Snyder had five points in the fourth quarter and Montrose held North Pocono to a lone field goal for the final.

Pompey was joined in double figures by Tangi Smith who finished with 10 points while Aspen Smith added nine and Snyder finished with eight.

Trail cut the lead to 37-33 after the third quarter as Trail held Jones to two field goals and outscored the Lady Warriors 15-10.

Trail continued its rally pulling ahead late before Delaney Curley cut the lead to one. Curley then rebounded a missed layup and found Upright who passed to Lily Decker who swung the ball back to Upright for the go-ahead bucket. Decker added two free throws for the final.

Jones finished with 27 points while Upright and Leah Traver each scored six points.

Aspen Smith scored 14 points over the middle quarters and Montrose broke open a tight game outscoring Susquehanna 33-4 over the same span to secure a 69-24 win.

Smith had six in the opening quarter and Mia Snyder and Haley Pompey each added four as Montrose built a 17-13 lead. Megan Kiernan had eight as the Lady Sabers kept pace.

In the second, Montrose clamped down defensively limiting Susquehanna to one field goal while Smith added six more points and was matched by her sister Tangi who also scored six points as Montrose built a 33-15 halftime lead.

Susquehanna outscored Blue Ridge 14-8 in the final quarter to break open a five-point game and pull away for a 41-38 win.

The Lady Sabers built a 22-16 halftime lead scoring 11 points in each quarter. Blue Ridge limited Susquehanna to five points in the third to cut the lead to one.

Blue Ridge came out with the only double digit quarter after halftime and rolled to a 32-12 win over Forest City.

Leading 10-7 at the half Blue Ridge outscored Forest City 13-4 in the third quarter as Emma Button scored five points and Libby Zick added four. Lilly Bleck added four points in the final quarter for the difference.

Button had six points in the first half as both offenses sputtered. She finished with 13 to lead Blue Ridge while Bleck added eight. Kim Graham and Ashley Bossick ech had four to lead Forest City.

Elk Lake held Carbondale to five points in the first half and rolled to a 50-12 exhibition win.

Krista Jones and Lilly Decker each scored four points as Elk Lake built a 16-3 lead. Jones added 11 points in the second quarter as the Lady Warriors built the lead to 38-5 at the half.

Lackawanna Trail shook off a Blue Ridge rally and edged the Lady Raiders 38-37.

Trail opened up a 11-10 lead despite five points from Libby Zick. Blue Ridge pulled even before halftime with their own 11-10 quarter as Zick tacked on five more points and the teams entered intermission knotted at 21.

Zick led the way for Blue Ridge with 15 points.

Riverside built a double-digit lead in the first quarter behind 17 points from Division I recruit Kylie Lavelle and cruised to a 71-37 Division III/IV crossover game win over Elk Lake.

The Lady Warriors played even with the Lady Vikings in the second quarter 12-12 as Krista Jones scored eight points and Elk Lake trailed 42-19.

Scranton built a 15-point halftime lead and rolled to a 54-28 non-league win over Susquehanna.

In the second half Scranton was limited to Susquehanna to six field goals. Iveson finished with 13 points to lead Susquehanna while Megan Kiernan added 10.

After a slow start Lakeland erupted for 16 points in the second quarter to cruise to a 55-14 Division III/IV crossover win over Forest City.

Forest City trailed 4-2 after the first quarter but was unable to get the offense going in the second quarter while Lakeland got the wheels turning to take a 20-5 lead into halftime. The Lady Chiefs added 20 points after intermission to take a commanding 40-11 lead into the final quarter.

Kim Graham and Haylee McHale each had four points to lead Forest City.

Be the first to comment on "Lady Meteors stay the course, EL withstands rally"