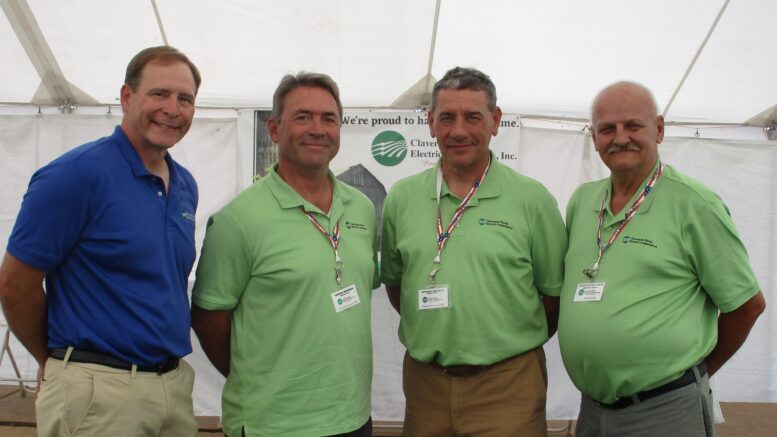 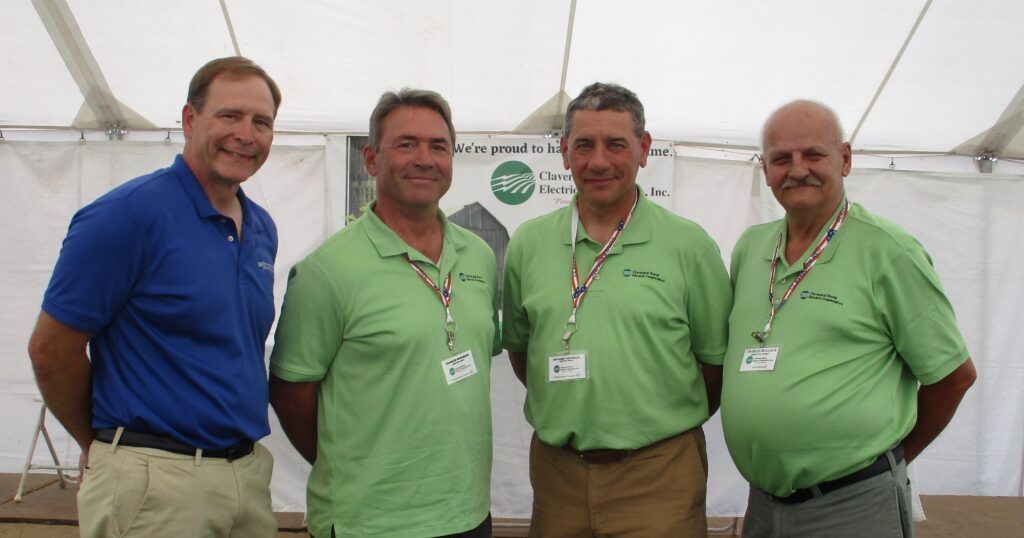 After two years of conducting their annual meeting virtually, staff and board members of Claverack Rural Electric Cooperative were happy to deliver reports on a variety of topics in person at the Wyoming County Fairgrounds in Meshoppen Township. The Wednesday, Aug. 31 gathering of hundreds of co-op members under a large white tent represented a move from Elk Lake High School and, previously, the Wysox Fire Company grounds.

Board chairman Robert Faux called the meeting to order, and member services director Brian Zeidner delivered the invocation. Faux and Claverack president and CEO Steve Allabaugh provided most of the content, which delved into plans to bring broadband internet to unserved and underserved rural communities and a doubling down on efforts to get dead and decaying ash trees away from power lines.  A recurring theme was the commitment by Claverack to find the proper balance between reliability and affordability.

“We are now seeing the full effect of ash trees on our reliability,” said Faux. “When the ash tree threat became apparent, we added a dedicated in-house forester to coordinate tree efforts.” Combining technologies like drone use and digital mapping, Faux added, “we have good data and continue to collect more on trees in right-of-ways and on member properties that can cause future problems.”

The larvae of the Emerald ash borer feed beneath the bark of the tree, cutting off the flow of water and nutrients, killing the host plant within three or four years. Prior to their arrival, Allabaugh related, falling trees were responsible for less than 50 percent of electrical outages. That percentage has soared in recent years.

Since 2015, crews dedicated to maintaining Claverack’s right-of-ways have cut down more than 9,000 ash trees on members’ properties. In that same time span, the cooperative has increased its right-of-way budget from $1.5 million to $3.7 million. A third crew dedicated to the efforts has also been added. Despite that, he lamented, outages have increased four-fold, in large part due to a parallel increase in severe storms.

“Mother Nature hasn’t been completely kind to us,” Allabaugh remarked. The April 23 storm that blanketed the region with as much as a foot or more of heavy, wet snow was the single most devastating weather event in the co-op’s history. “It resulted in some members being out of power for more than a week and cost over $1.8 million after all the bills were in.”

In addition to large-scale weather events, Allabaugh continued, there has been a steady increase in the number of “blue sky day” outages, especially when winds pick up to more than 30 miles per hour. “What started as a scuffle has evolved into a real fist fight,” he said of the ongoing struggle to keep up with falling trees.

Nonetheless, all things considered, Allabaugh expressed pride and gratitude in employees who have missed many an important event with their families to clear right-of-ways and restore electrical service around the clock. Changes in approach to the situation have included expanding maintenance efforts from the traditional 40-foot corridor from their lines to 80 feet with the cooperation of landowners. “Your help in allowing contractors to get to the trees will be invaluable in this process,” Allabaugh stated.

He and Faux were eager to get beyond the problems caused by ash trees and report their progress in getting reliable internet to customers along Claverack’s 2,800 miles of lines. The project of paralleling electric lines with fiber optic lines will begin in Bradford County in early 2023, subsequently expanding into Susquehanna County and then Wyoming County.

Under the name Revolution Broadband, the cooperative intends to deliver internet, in-home Wi-Fi, and phone services. “The broadband buildout will provide business and educational opportunities where they cannot exist without high-speed access to internet,” Faux maintained.

With an understanding that such an extensive effort in areas with less than seven customers per mile would not be feasible without outside funding, Claverack board members and management began seeking financial support from the state and federal government in 2016. So far, a combined $32 million has been earmarked for the endeavor.

“The goal of the project is twofold,” Allabaugh explained. “We want to build a state-of-the-art fiber optic network that we can utilize to enhance our electric service, and we want to ensure that Claverack members have access to affordable, high-speed broadband service, whether that service is from us or is available from another internet provider.”

Faux also gave credit to a number of elected officials in attendance, including state representatives Tina Pickett and Clint Owlett, U.S. Rep. Fred Keller, and Wyoming County commissioner Ernie King for their support in helping to communicate the great need for rural internet to those holding the purse strings.

As none of the board seats up for renewal this year were contested, Claverack’s Credentials and Elections Committee forewent the formal balloting process and cast instead a unanimous ballot to re-elect three current board members to respectively represent zones 7, 8 and 9. Chuck Bullock, who is currently the longest-serving board member will continue to serve several municipalities in central and southwestern Susquehanna County, as well as Nicholson Township in Wyoming County. Charlie McNamara was reelected to represent municipalities in northern Susquehanna County. And Tony Ventello will stay on for another three-year term in Zone 9, which includes much of central and western Bradford County and eastern Tioga County.

Board members collectively oversee the operations of the CEO and help to make financial decisions and check the progress of strategic initiatives like the broadband buildout. Ventello remarked that he has been impressed by the professionalism and quality of the board members, who undergo extensive training to excel in their positions. Bullock noted that he has made life-long friends from across the state while serving on the board. McNamara said that he is proud of the work of the board, whose efforts are always focused on the “greater good of the community.”

All registered customer members in attendance will receive a $20 electric bill credit and were given $25 in vouchers that could be used to purchase food or general merchandise from vendors through the duration of the Wyoming County Fair.

Be the first to comment on "Ash Trees & Broadband: Key topics at Claverack meeting"