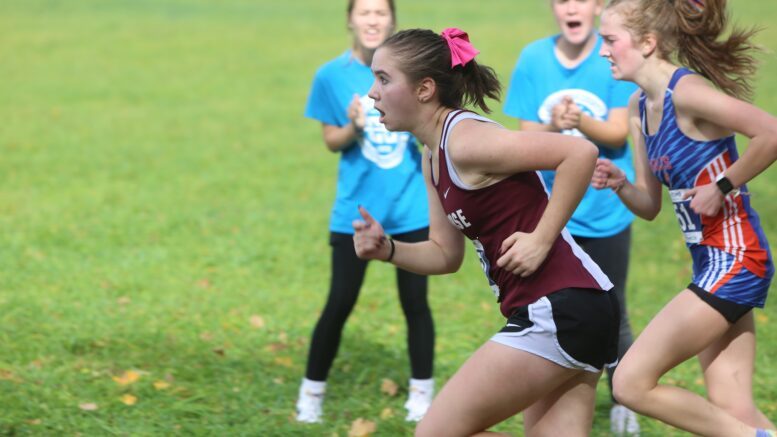 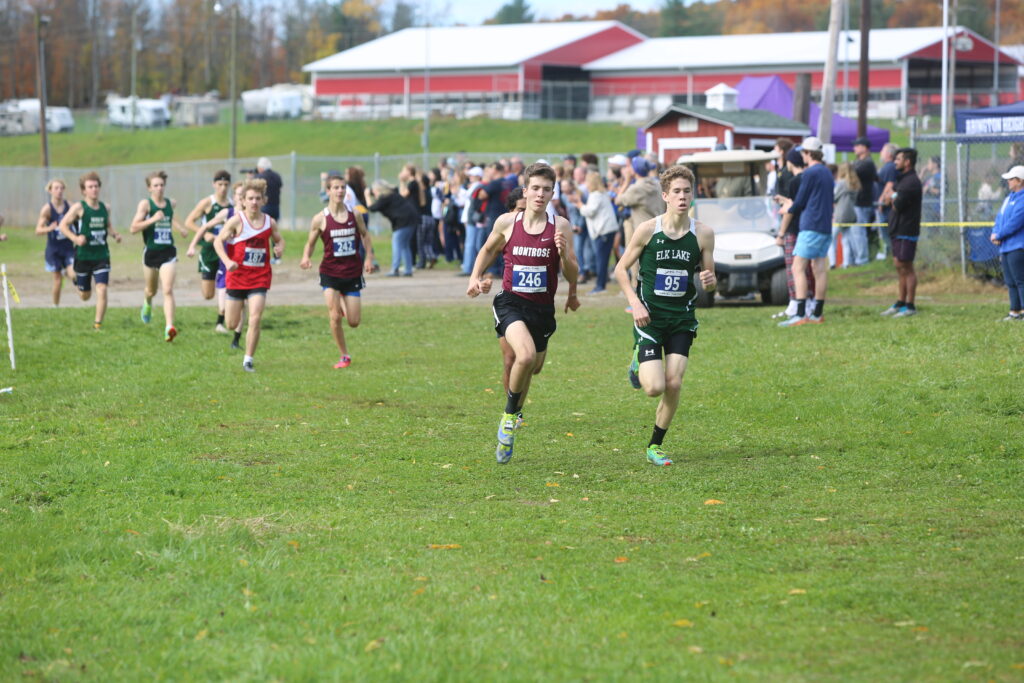 Montrose’s Nate Sinkovich (295) and Elk Lake’s Kendel Jones (95) lead the pack at the District II Class A Boys’ Cross Country Championships. Jones would claim the race ahead of Sinkovich to lead Elk Lake to the team title. Both runners qualified for this weekend’s PIAA Championships in Hershey.
PHOTO COURTESY ED KING 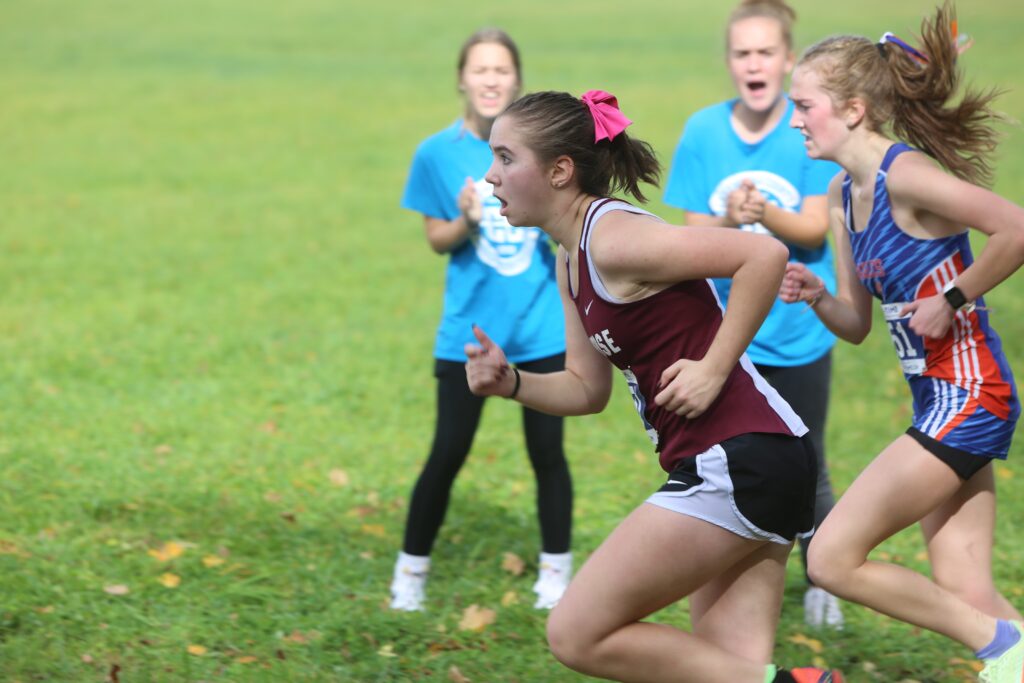 Kate Korty did what she has done most of the season – get out fast and maintain the lead in capturing the Girls’ Class A title.

The Forest City sophomore finished in a time of 19:55.1 and besting the field by nearly 44 seconds to earn her second trip to Chocolate Town.

Montrose Area’s Mary Pichette continued her strong finish to the season, placing third to lead Montrose to the team title. The Lady Meteors put all five of their runners in the top 13 and won decisively with 28 points – 34 less than second place Lakeland.

Following Pichette were Stephanie Summerville (5th) and Paige Brewer (6th) Avery Kerr (8th) and Daegan Giannone (13th). The win qualifies the Montrose team for the PIAA championships and allows all five runners to compete as individuals as well.

Mountain View finished third in the team standings and qualified three runners for the trip to Hershey.

Carissa Flynn placed fourth overall and will make her third straight trip to the PIAA championships. She will be joined by teammates Corinne Flynn who finished 11th in her first varsity District II race and senior GG Larkin who crossed the line in 16th place to claim one of the final individual spots.

Forest City only had four runners and couldn’t compete for the team championship but Korty was joined by fellow sophomores Laura Nebzydoski at 22nd place and Mea Mott and Emily Frisbie who finished at 60 and 61, respectively.

Kendel Jones was able to repeat what he did a couple weeks prior and etched his name to the family legacy to capture the Class A boys’ race and lead Elk Lake to the team title.

The freshman sensation captured the race in a time of 17:03.3 and joined his brother Luke and sister Krista as District Champions.

Jones finished 15 seconds ahead of Montrose’s Nate Sinkovich who took the silver medal for the second year in a row. The pair has run neck-and-neck all season running in the same Lackawanna League cluster.

Senior Dylan Way placed fourth to aid the Elk Lake cause and was followed by Cody Adams in the top ten at seventh. Whalen Kinney and John Heitsman finished 22nd and 23rd to account for the Warrior point total of 51 which was 17 ahead of second place Holy Cross. Quinn Grosvenor also ran for Elk Lake, finishing 55th.

The final local spot for the PIAA championships was earned by Blue Ridge’s Max Ksenich. The sophomore finished eighth, edging Chidester by four seconds for the last of the five open spots.

The Raiders were unable to compete in the team championships due to injury limiting to four finishers. Duncan Geyer joined Ksenich on the medal stand earning 13th place, while Bryce Conklin and Ryan Stallings placed 37th and 52nd.

Susquehanna finished fourth overall led by JT Burke who snared the last medal coming in 15th and followed by Maxx Kelly who placed 19th, Matt Schell and Matt Mattis who were 27th and 28th and Memphis Collins who crossed ten seconds later for 30th. Jack Jones and Brice Woodruff were 39th and 54th for the young Sabers who will only lose Collins next season.

Mountain View finished seventh when Rory Shea captured 21st in his best finish of the season followed by Michael Beach (26th) and Sean Larkin (29th), Seth Wallace (34th) and Aiden Beavers (36th) for the Eagle points. Junior Ordie Price was 40th and Richter Masters was 49th for a Mountain View team that should return all seven runners next season.

Be the first to comment on "District XC titles go to Korty, Jones, Lady Meteors"