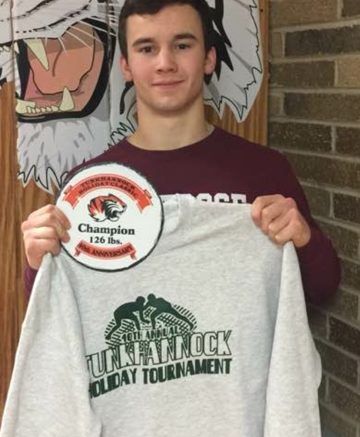 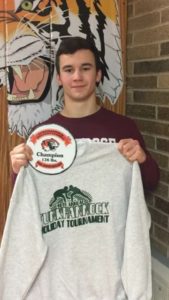 Joe Hester, a junior wrestler from Montrose Area captured the 132-pound weight class championship at the Lackawanna League Championships held at Wallenpaupack High School, Dec. 16.
He followed the championship by capturing the 126-pound Title at the Tunkhannock Christmas Tournament to help lead the Meteors to 8th place out of 23 teams. Hester pinned two opponents and had a 5-4 decision to reach the final. For these efforts, Hester is the Independent’s Athlete of the Week.
Family: Parents – Michael & Tina Hester Sister – Anastasia
Other Sports you play: I only do Wrestling
Superstitions or rituals: I get a light warmup before every match and I say a little prayer to help out.
Things you enjoy doing outside of wrestling: Hanging with my buddies and hunting.
Three people you’d like to have dinner with? Zain Retherford, Toby Keith, and John Wayne
Take us back to the championship match at the Tunkhannock Tournament. What was the key to victory and what happened on the move that put you ahead to stay? The match was so back and forth, and I think it just came down to who wanted it more.
He (Luke DiGiovani) was in a square stance and I noticed his leg was open, and I just went for it. I really thought at that point something was going to happen. Either I was going take him down or he was going to get me.
What was working for you at the previous tournament, The Lackawanna League Championships? Hard work pays off! I think that really showed how much the preseason conditioning and working out all year really helped. I just felt I was better prepared than I had been in previous years. I worked a lot in the offseason with Coach Jason Goldman of Susquehanna Valley and went to a couple of camps during the summer.
What are your personal and team goals for this season? I’d like our team win District Duals and a league championship. I think we have a really strong team and guys are working hard. Personally, I’d like to win a District Championship, do well at Regionals, and capture a State medal
What did you do differently to prepare for your junior season? The stuff I mentioned before. I knew I had to get better in all areas, but I especially worked on how I wrestle in the neutral position. Our coaches, Matt Hawley and Wade Robinson, are great, and I try to focus on the advice they give.

Be the first to comment on "Athlete of the Week: Montrose Area’s Joe Hester"