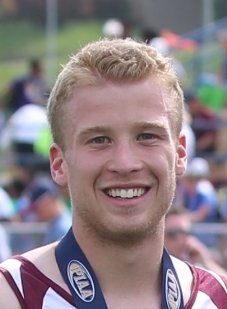 For four years Montrose senior Brennan Gilhool made a mark on the soccer pitch, basketball court, and on the track. He was pretty sharp in the classroom as well.

Gilhool led a group of local athletes by being named the male Lackawanna Interscholastic Athletic Association’s Athlete of the Year.

Gilhool and Wallenpaupack’s Rachael Tirjan were named for the top honor at last week’s banquet held at Genetti Manor in Dickson City.

“I was very surprised and honored,” said Gilhool. “Being selected among all the talented athletes in the Lackawanna League is very rewarding.”

Gilhool was an All Regional soccer player his senior year as well as a two-year team captain. As a basketball player he earned honorable mention division all-star recognition and was named to the Lackawanna Track Conference Division III-IV all star teams while qualifying for the PIAA state championships.

Gilhool is a member of the National Honor Society, Spanish Club, Varsity Club, FBLA, I-safe, and the AP Club. In addition, he served as the Montrose Tutor Coordinator and as the Student Liaison to the Montrose Area School Board.

“I was able to challenge myself and have the opportunity to take AP classes,” noted Gilhool. “The courses showed me that I was capable of taking high level classes.”

Time management was the key element in Gilhool’s success both on and off the court or field.

“If I knew I had big meet or game coming up I knew I had to get my work done in advance,” said Gilhool. “Sports have kept me from procrastinating throughout the years.”