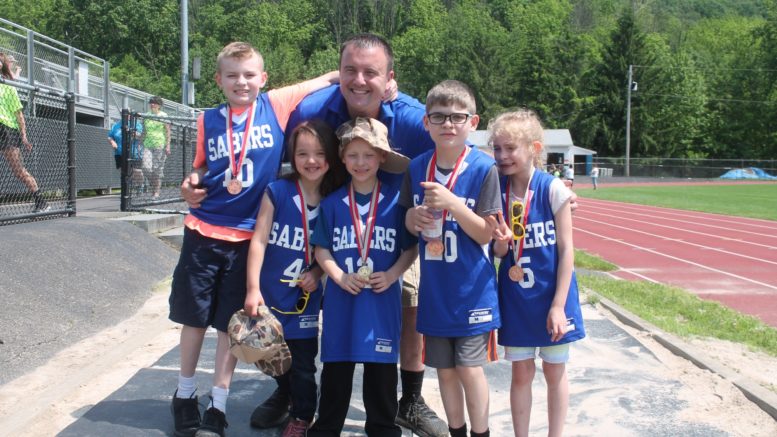 After a harsh weather event, that included a confirmed tornado touchdown in Wyoming County on Wednesday, the Area P Special Olympics held its annual competition on Friday at Tunkhannock Area High School.

Around 235 athletes of all ages and abilities represented 12 area school districts and programs on a picture perfect spring day.

Host school Tunkhannock had the largest number of participants. Lackawanna Trail sent three students, and Elk Lake was unable to attend as a group.

The district makes arrangements for the student athletes to attend on the scheduled date, but not if the event is rescheduled. Some Warriors, however, arrived with their caretakers and parents.

Joe Lillis, who has been the manager of Area P, which includes Wyoming, Susquehanna, Lackawanna, Wayne and Pike counties, for eight years, said unfortunately, this happens.

“The weather really affected the turnout today, but we are pleased with the amount of athletes here.”

He also pointed out that Tunkhannock Area has been a wonderful host throughout the years. “The school district has outdone themselves this time,” said Lillis. “The amount of volunteers is fantastic, it is a sea of green out there. We are so pleased.”

Mary Beth Howell, along with her team of Angel Hawley, Kristen Kern, Krista Dymond, and Karen Weisgold, were part of the team that organized the event.

Howell said, “We survived two tornadoes, it was a nightmare, but it is a beautiful day here today and the kids are smiling. We made the right call.”

She continued, “This wouldn’t be possible, though, without our Special Education director, Mary Batty, and the incredible donations from the community. This event is such a success because of them.”

The festivities opened with the Tunkhannock marching band leading the parade of athletes in a walk around the track, before Tunkhannock students Dakota Hallock and Aaron Publik ushered in the ceremonial torch to kick off the events.

Different groups and organizations were represented, as well as the schools. Susquehanna -Wyoming County transportation was on hand to offer information to parents, caregivers, and teachers about their services. Bayada also had a table, complete with giveaways including pencils and sunglasses. They also supplied free water bottles to everyone.

Elk Lake graduate Sean Eckert, who was in Tunkhannock with Keystone Community Resources, enjoyed all the events of the day. When asked his favorite event, he excitedly replied, “All of them.”

Paul Grabowski, a physical education teacher in the Intermediate Center, was emceeing the event. He said, “This is a great opportunity to have this kind of participation-socially and athletically. Our volunteers also see that special needs athletes can compete the same as everyone else, and most importantly, everyone has the chance to succeed.”

That lesson wasn’t lost on the full force of high school volunteers.

“This is great, it makes you feel good inside,” said Jordon Wagner. “It is good to see everyone participate.”

Ryan Van Ness and Jakob Baltrusaitis agreed, and offered that it puts their own practices into perspective.

Van Ness said, “If everyone out here is giving it their all, 100 percent, and we don’t have the same challenges, why shouldn’t we give it the same effort? We should give maximum effort, like they do.”

Tunkhannock senior track standout Rebecca Avery has been volunteering every year. But she has an ulterior motive, admitting she loves to spend time with her brother Ben, who has Downs Syndrome.

“I love to see his face when he crosses the finish line,” she said. “His is so happy. I have been volunteering every year, to be a part of this with him.”

Tunkhannock Area High School student council advisor Staci Wiernusz offered, “All our students enjoy this day. The students need to sign up to volunteer, and this is usually the first event to fill up – there is a rush for it.”

She continued, “Some students end up going into (the) special education (career field) because of this experience.”

The clinking on medals was heard throughout the afternoon, and athletes refreshed themselves with donated sno-kones and popcorn.

Leaving the track for the afternoon, one athlete smiled at her caregiver, offered a hug, and said “Thank you.”

That moment, that smile, was special for everyone involved.

It is also the main reason why everyone on the field and in the stands Friday afternoon in Tunkhannock will be back again next year.