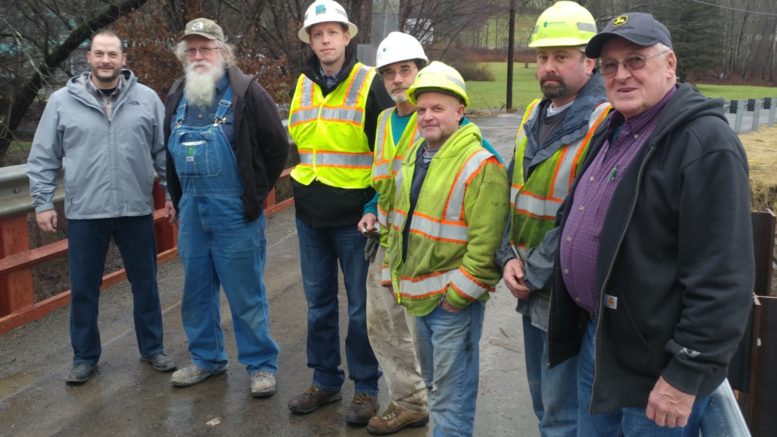 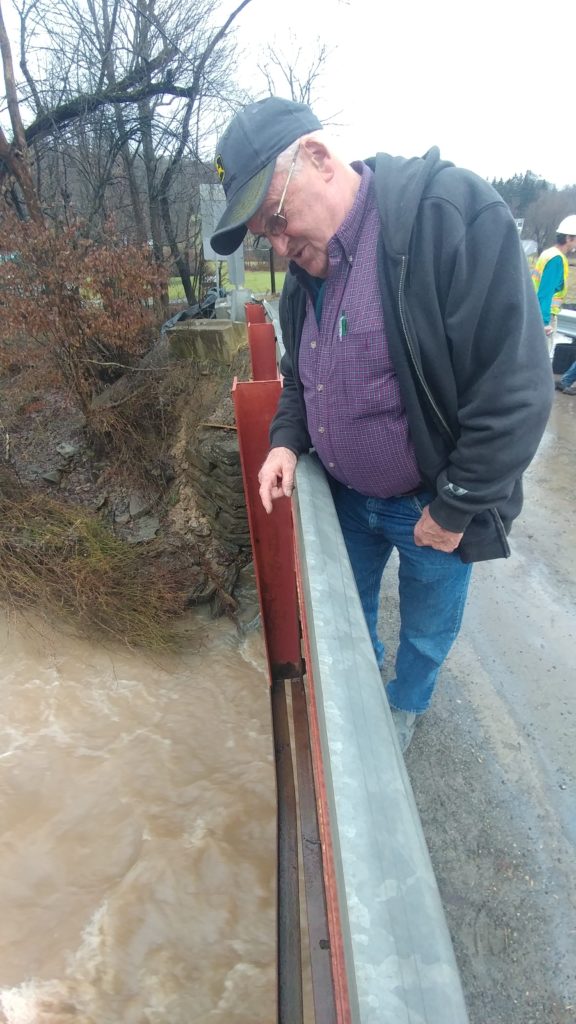 Jessup Twp. Supervisor Denny Bunnell inspects bridgework on the State Route 3029 bridge, which reopened Friday, Dec. 21, after having been closed since August due to damage from flooding. PHOTO BY REGGIE SHEFFIELD

Jessup Twp. Supervisor Denny Bunnell inspects bridgework on the State Route 3029 bridge, which reopened Friday, Dec. 21, after having been closed since August due to damage from flooding.  PHOTO BY REGGIE SHEFFIELD

“I wanted to be the first one!” Bunnell exclaimed.

Built in 1887, the bridge had been knocked out of service since flash flooding took it out August 14.  A vital link in the township with Route 706 and Ridge Road, the bridge therefore also serves as a link between Montrose and other communities such as Forest Lake, Bunnell explained.  Having to find another way involved driving on “miles and miles” of dirt roads, he said.

“I am just thrilled that this is being opened today because it has been a terrible, terrible situation,” Bunnell said.

The long-time township supervisor said that the loss of the bridge has affected local farms as milk delivery trucks have had to take alternate routes and local residents such as those on dialysis have had longer trips to reach much needed medical appointments.

“The weather conditions have been terrible.  We’ve had to close one of our roads because of people getting stuck on it,” he said.

“I just wish that the state would have handled it differently because if they had done some of the things we had suggested and offered to help them, the bridge could have been opened a lot sooner than it has.  But that’s history; it’s in the past and we can go forward,” Bunnell said.

Brian Small, PennDOT’s new county highway maintenance manager, said that PennDOT had already spent over $30,000 to repair the bridge and that a new bridge is in the design stages for 2020.  Small said that 340 vehicles cross the bridge each day.

“So you talk about quality of life, but the other component is also access to emergency response vehicles,” observed Rep. Jonathan Fritz, who with Susquehanna County Commissioner Alan Hall, worked with township and other officials to hasten repairs on the bridge.

Fritz, Hall, and his fellow commissioners, along with Rep. Tina Pickett and other local officials have repeatedly bemoaned PennDOT’s sluggish response to the $10 million in damages to local roads and bridges caused by last summer’s floods.

“The August storms brought severe, widespread damage to roadway and infrastructure and as a result we saw a lot of folks come together, key people – county commissioners, county EMA, township supervisors, state agencies, and especially PennDOT,” Fritz said.  “When those people come together as a united front, good things happen and today’s bridge reopening is an example of that,” he added.

“We just want people to be able to get back to normal,” he said.

The road back from rock bottom

Be the first to comment on "Jessup Twp. bridge re-opens"