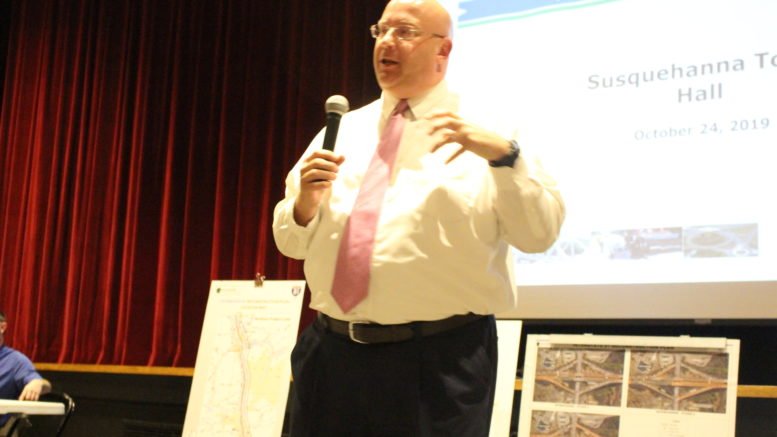 PennDOT District 4 Director Richard Roman describes a tour of Susquehanna County roads this past May as “eye-opening.”

Roman, a long time PennDOT employee and civil engineer, stepped into the District 4 director’s role 10 months ago. He told an audience at the Thursday, Oct. 24 town hall the four hour tour showed him that “we (PennDOT) have some work to do.”

Within a month, a plan was put in place to address the road conditions and Roman said he was holding the agency accountable. “In the past several years, we weren’t.” His goal is to provide safe, passable roads in the county.

“We didn’t get in this overnight,” Roman said as he introduced a five to six year plan to address the state road system in the county. 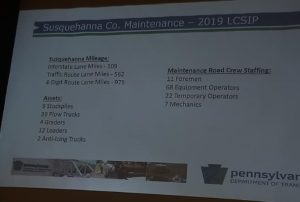 Since mid-July, over 8,836 tons of patching has been done on the roads – double the amount that has been done in the past three years.

Roman said he’s happy with the progress that has been made in the past three months but admitted it would take “four to five to six” years to get the roads in the condition he wants them.

“I want people to know – my staff and myself are turning around the dynamic in Susquehanna County.” As for most complaints, “We’ve heard about them and I’ve seen them.”

“In the past, we didn’t do our best with it. We’re on a path to get there,” Roman assured the audience.

Shoulder cutting is used to reestablish ditches. “You’re going to see a lot more of that going on,” he said. Westover also noted that PennDOT is always looking for places to get rid of the “dirt” removed in the process.

Crack-sealing is to be used on high volume roads and sealcoating is used for secondary roads as part of the maintenance work to extend the lifespan of the roadways.

Locally, Brian Small acts as the maintenance manager for Susquehanna and Wyoming counties. He said the target is to sealcoat 100 miles of road each year, at an annual cost of $1.2 million.

Small also explained the budgetary constraints he faces with a $24.658 million allocation. Of that, 60 percent goes to salaries and wages.

Winter expenditures average about $5.7 million; and $3 million to road maintenance and repairs. “It is not the newest fleet out there and we have to maintain it.”

Small said after all other costs, about $1.7 million is left in the budget to cover road maintenance.

There are about 800 miles of state roads in the county, and winter temporary help is needed to man the 39 trucks. “On our best day we can staff eight crews. Over the years, we scramble from one fire to the next,” he said.

Brian Baker, of the Northern Tier Regional Planning Development Commission, explained the federal funding streams and projects that NTRPDC administers regarding the roads. He also noted that situations – like the 2018 flooding – can push out projects from the plan.

Sue Kazelton, ADE Design, discussed upcoming projects in the county, including a interstate projects from the New York state line to New Milford and another in the Exit 2019 area, specifically addressing the dangerous southbound exit ramp.

On the road conditions, Rep. Tina Pickett said, “We were headed for rock bottom. I think the flood took us the rest of the way there.”

She said the damage here from the August 2018 flash floods was “shocking” with gullies along the roadways that were four to six feet deep.

But Pickett said she believes the changes in the District management will bring positive changes to the county’s road system but said Small needs, “men, money and machines.”

Audience members were able to ask questions, or fill out index cards, with the promise from Roman those questions would all be answered.

Questions included why the recent paving on Route 11 stopped midway through New Milford Borough. Roman said projects end based on available funding. “If the money would have taken us the 2000-feet more, we would have done it,” he said.

Roman also addressed a failure of the material that was used in the Montrose area on the Route 706 project a few years ago. That pavement, he said, will be fixed and the quarry is no longer used by PennDOT.

A few audience members said the county’s Act 13 money should be used to fix the state’s roadways.

One audience member said she does not feel the roads are safe. “Sometimes I am scared for our lives,” she said.

Roman also heard specific complaints about roads around the county.

“All I know is we’re here and I want to get us out of it,” he said of the current conditions. “We’re gonna do the best we can to fix it.”