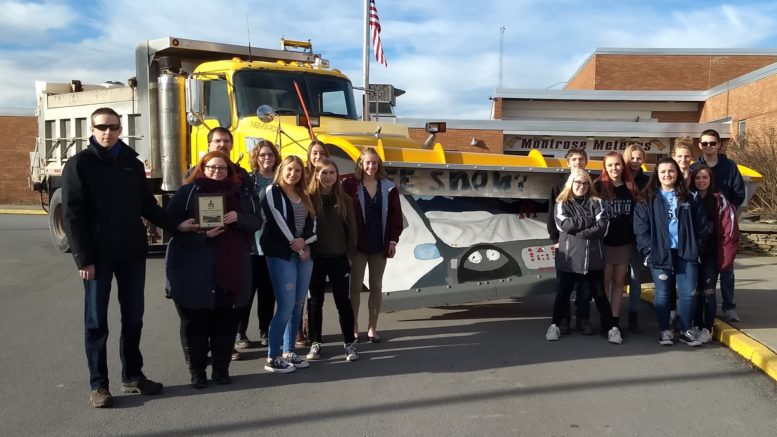 Those familiar with the entrance to Meteor Way off School Road in Bridgewater Township can immediately identify the artwork appearing on a PennDOT plow truck.

The theme was one of three suggested by PennDOT. The other themes included: “Know Before You Go,” and “Don’t Crowd the Plow.”

This was the first year Montrose Area participated in the PennDOT District 4 competition and earned top honors among Susquehanna County schools. North Pocono High School received the District 4 “Fan Favorite” award based on the number of “likes” it received on Facebook during the voting period.

Art students in grades 9-12 worked on the project, but the idea stemmed from the Art 3 class. After brainstorming ideas, the students settled on Abi Jennings’ concept of a scene depicting the view from a driver’s window and seeing Meteor Way.

Schools signed up to compete in the annual contest in the spring. Plows were delivered to the schools in the fall and from there, students set to work designing and painting.

Painting was done outside, and the large number of days with inclement weather this fall set the students behind schedule. The deadline extended one week to give the participating districts time to finish up their projects.

Miller said the PennDOT tries to use the participating school’s plows on routes near the campus so students can see their entries at work.

The road back from rock bottom

Be the first to comment on "‘See Snow? Drive Slow!’ warns winning plow"