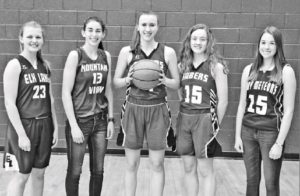 After earning Player of the Year honors last year as a sophomore, Susquehanna’s Taylor Huyck allowed for no let down her junior season and once again earned the top nod from Lackawanna League Division IV coaches.

Huyck led the Division is scoring averaging just over 15 points per game as she helped lead the Lady Sabers to league title, District II title, and the District II/District 11 Class A Sub regional championship.

“I owe a lot to my teammates and coaches to push me to be the player I can be,” said Huyck. “We play so well together and rely on each other so much.”

The junior guard scored 412 points over the season including the 1,000th of her career on the final night of the regular season.

Steele finished just behind her teammate with over 12 points per game in league play while providing Susquehanna a distinct advantage inside with her rebounding and shot-blocking ability.

Newhart was another returning all star who led Mountain View to a second-place finish in division play and scored 29 points in the opening round of districts to earn the Lady Eagles a playoff victory.

Andre averaged over two 3-pointers and just under 11 points per game for the young Lady Meteors squad that finished third in division play.

Zajackzkowski scored over 10 points per game while proving to be a menace on the offensive glass and helped the Lady Warriors secure the only Division III/IV crossover victory with a win over Lakeland.