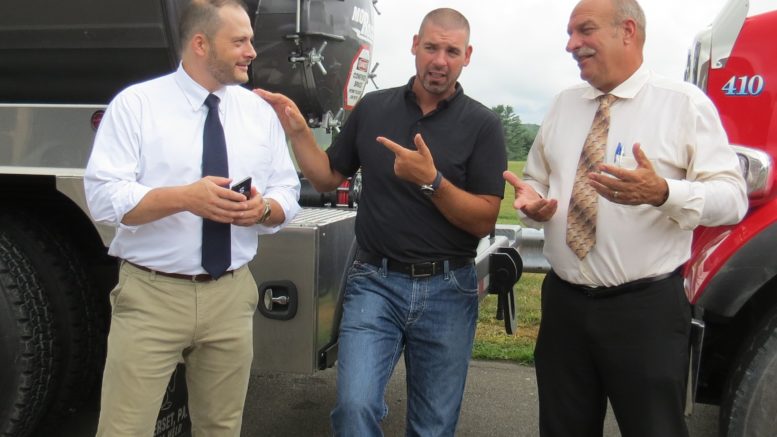 Elk Lake/SCCTC Superintendent Dr. Ken Cuomo describes the addition of a CDL training program to its offerings as a “win-win-win” situation that will have a positive impact on students, the community and local businesses. 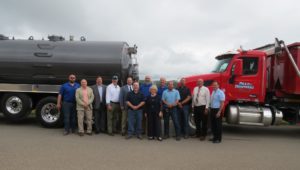 Cuomo led the remarks offered Thursday morning as the district, along with elected officials and business leaders, announced the launch of the CDL training facility on the grounds of the Elk Lake campus.

The companies, in turn, are looking to the program to help lessen the shortage of qualified drivers.

Rep. Tina Pickett (R-110th) said that after years of success she could “expect Elk Lake/SCCTC would be a leader in this new education.”

Rep. Jonathan Fritz (R-111th) said the addition of the program is a “wonderful example of rural Pennsylvania on the cutting edge of leadership.”

He said the certified driving jobs could provide annual incomes of $70,000 or more. “That’s life-changing in a rural economy,” Fritz said.

Susquehanna County Commissioner Alan Hall remarked that the program provided “a great opportunity to put hundreds of people back into the seat of trucks.”

Chad Gorman, of GDS, said he began to talk about the addition of the CDL program about one and one-half years ago with SCCTC Executive Director Dr. Alice Davis. “We started talking through and beyond the 100 drivers GDS needed to the hundreds and hundreds of drivers needed in the community. This is a huge benefit, not only to GDS, but for other companies.”

Currently those looking to train for the CDL license need to travel long distances, offered Diaz Companies owner Adam Diaz. He said his company’s involvement with helping to launch the program is “only going to help us and all the others.”

Gene Barr, president of the PA Chamber of Business and Industry, and also a member of Gov. Tom Wolf’s Keystone Economic Development and Workforce Command Center said there is a “workforce crisis” in the state. “There are people without jobs and jobs without people,” Barr offered.

He said programs like the one being launched at SCCTC provide an example of partnerships between public and private interests that make an investment and will provide family-sustaining jobs.

Barr also noted that CDL drivers are an integral part of the nation’s economy. He said that without trained drivers “commerce would grind to a halt.”

Cuomo offered his thanks to the business leaders, and to Davis, who he called a “driving force” in bringing the program to SCCTC and SCCTC instructor Gary Fenton.

Be the first to comment on "SCCTC adds CDL training program"