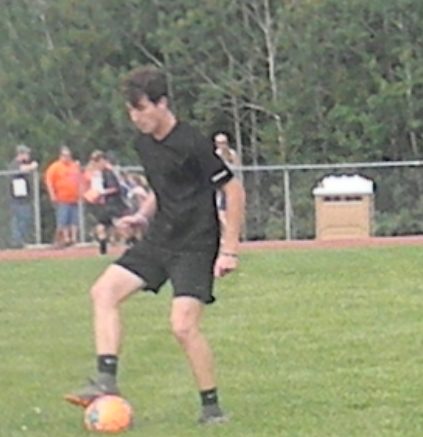 Mountain View's Michael DeWolfe controls the ball during the Eagles scrimmage versus the Mountain View alumni. The game served as a tuneup for the Eagles and proceeds contributed to the Caden Scott Scholarship. PHOTO BY COREY GESFORD

Change is the theme among the local boys’ soccer teams heading into the 2019 season, but each team is viewing that change from a different perspective. 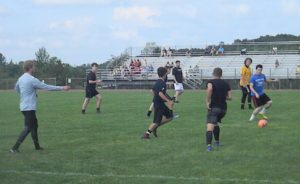 Mountain View defenders swarm to the ball as Mountain View alum Anthony Neri gains control. The alumni who contained several All Regional and All State players prevailed over the current squad 6-2 to help the current Eagles to prepare for the upcoming season. PHOTO BY COREY GESFORD

Coach Eric Stallings’ Raiders are coming off another successful season that ended with a heartbreaking overtime loss to Forest City in the District II Class A semifinal.

While the Raiders lost some key cogs up front to graduation, they will feel the change most in the back where Stallings will need to find a replacement for Goalkeeper Eric Hall and Defender Ben Gudykunst.

“We’ve got guys who can fill the spots, it’s just a matter of getting them experience and getting use to the varsity level,” said Stallings.

The Raiders will lean on their strength up front and in the midfield where most of the core returns with experience.

“I think our offense will be a strength, we have a lot of experience,” said senior Ben Bleck.

Senior Cameron Franks felt the team’s speed will be an asset as well. “We have a lot of speedy players,” said Franks. “Right down the line, even our defenders are fast to the ball.”

The Eagles have the luxury of returning most of their starters after losing just two seniors to graduation.

But what is new for the Eagles is the captain of the ship after Coach Joe Scanlon resigned earlier this month to accept a teaching and coaching position at Nazareth High School. But Roger Thomas has returned to the sidelines after a two-year hiatus.

“It’s privilege to return to the sideline. Joe did a tremendous job the last two years and it’s been an easy transition back,” said Thomas.

The fact that Thomas preceded Scanlon has made the transition easier for the young Eagles. “They have a lot of the same philosophies so it’s been a rather easy change,” said junior Mike DeWolfe.

What Thomas sees as a strength to the team and one of the reasons he came back was the attitude of the returning players. “We’ve got great coachability and a good spirit,” said Thomas.

DeWolfe sees the experience of the junior class beginning to emerge as an asset coupled with the fact that Mountain View relied on them and the sophomore class a year ago.

“We’re more mature than we were a year ago and we’re gaining a sense of what we need to do at this level,” added DeWolfe.

“We encourage everyone to do their best and to push themselves to reach their potential,” said junior Goalkeeper Connor Richmond.

One area of concern for Thomas is depth. With only two seniors on the roster the Eagles core is primarily made up of juniors and sophomores.

“You need 11 on the field and you like to have 15 or 16 guys to rotate,” said Thomas. “But we’ll have to work to get to that number of guys that can play at the varsity level.”

The Meteors find themselves in a similar situation that Mountain View did a year ago. Montrose will rely heavily on new players after graduating five seniors and some experienced players from a year ago opting not to come out.

“We lost a lot, so we are taking things day by day,” said Montrose Coach Dan Cherney. “We’re not worried about the distant future, we’re just looking at what we can do to be better tomorrow.”

Cherney is encouraged by the team’s mentality and commitment to getting ready for the season with preseason conditioning.

“Our work ethic is great, and the time put in the off-season, we are light years ahead from physical conditioning standpoint than we were last year,” said Cherney.

Junior Jason Smith added that there is a sense of determination among the team and the underclassmen to get better. “There’s no quit,” said Smith. “Guys keep after it and aren’t getting discouraged.

Cherney is using the preseason schedule to acclimate his younger players to the varsity level and build on that conditioning.

“We want to get our younger guys as many touches we can at a varsity level because they haven’t had a lot of that,” noted Cherney. “We’re not worried about the score but focused on did we do a couple things right that we didn’t do the previous game.”

That work ethic is something junior Ted Lubash sees helping the team grow quickly. “We’re not perfect but we’re going to work to get better every day,” said Lubash. “We want to build that team atmosphere and hopefully the younger guys can fill some of the spots we need filled.”

The change at Elk Lake is a positive one. Where numbers have been a concern in the past, the Warriors have over 20 players out competing for spots on the team.

“We have a lot of squad depth, something we didn’t have last year” said senior Noah Johnson. “We have guys that can do the business on the field beyond our starting 11.”

The Warriors will look to aid that depth and versatility with improved communication.

“I think we can communicate better, especially on the defensive end,” said Johnson. “We have skilled defenders, they know what to do, we just have to gel and build that cohesiveness.”

Johnson and fellow senior Alex Braddish are trying to lead a young group that will rely on sophomores and freshmen to fill key spots.

“I try to have a positive attitude,” said Braddish. “If I see and underclassmen struggling, I try to come in keep them in a positive mind.”