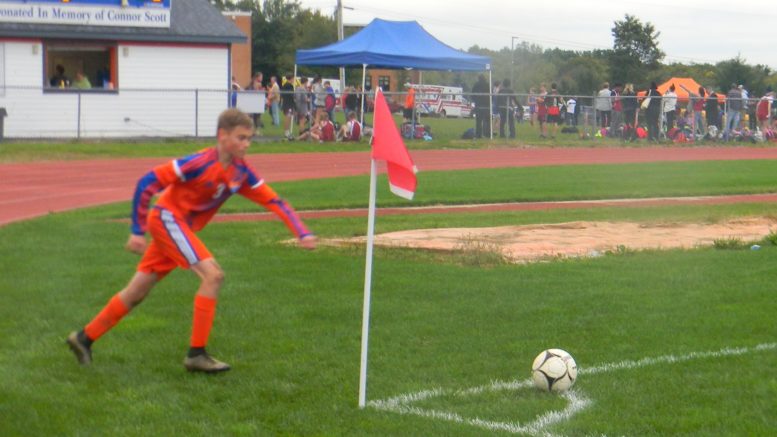 Forest City maintained its hold on the Lackawanna League Division II Boys’ Soccer and several teams picked up their first wins of the season during the second full week of play.

Corey Daniels scored off a Brady Hentschel assist and fed Lipko for his first goal in a three-minute span in the first half to give the Foresters the lead.

Blue Ridge’s Garret Conklin converted a penalty kick with ten minutes remaining in the half to cut the deficit.

The senior opened the scoring with goal three minutes into the game off a Jacob Gray pass. Lipko scored again at the seven and eleven-minute marks off feeds from Daniels. Forest city closed out the scoring when Daniles scored off a Hentschel assist.

Gigliotti earned eight saves on the 11 shots taken by Riverside.

Mountain View erupted for four goals in the first half against Mid Valley to register their first league win of the season dispatching the Spartans 4-1.

Rigo Viveros scored an unassisted goal just over 12 minutes into the game and took a feed from Mike DeWolfe to score again 13 minutes later.

Zach Polovitch tacked on two more goals for the Eagles scoring at the 28-minute mark off an assist from Hunter Beach Jones and taking matters into his own hands a minute later.

The Eagles made it three in a row with a 3-0 shut out of Elk Lake.

Polovitch took a pass from Caleb Eichelberger eleven minutes into the game and Josh Tybrowski tacked on another seven minutes before halftime. Nathan Ofalt scored the lone goal of the second half.

Mountain View outshot the Warriors 16-8 as Elk Lake Goalkeeper Caden Ramey recorded eight saves. Bain had the lone save for the Eagles.

Despite outshooting Mid Valley 19-9 Montrose fell 2-1 to the Spartans who scored twice in a two-minute span during the final seven minutes of play.

Montrose led 1-0 at halftime after Aiden Birchard scored off a Theodore Lubash assist midway through the first half.  The Meteor lead would hold for 50 minutes until goals by Christian Chakiris and John Zarnowski allowed Mid Valley to prevail.

Goalkeeper Jesse Rogers had seven saves for the Meteors.

Montrose was able to notch their first win with 3-1 victory over Old Forge.

Lubash got the Meteors on the board first with a goal midway through the first half.

Birchard and Nick Pasteka added goals after halftime and Rogers kept the Blue Devils out of the net until a goal with seven minutes remaining. Roger had four saves on nine shots.

Despite leading 3-1 at halftime Blue Ridge fell to Gregory the Great 7-4 when the Highlanders exploded for six goals in the second half.

The Raiders scored quickly as Ryan Mills placed a pass from Ben Bleck into the back of the net in the first minute of the game.

The pair hooked up again for Mills’s second goal eight minutes later and Bleck scored unassisted at the 24-minute mark as Blue Ridge took control of the game.

Gregory the Great cut the lead to 3-1 before halftime and then exploded with five goals between the 45 and 55-minute marks of the game.

Garret Conklin’s penalty kick conversion cut the lead to 6-4 with four minutes to go but could not mount a rally.