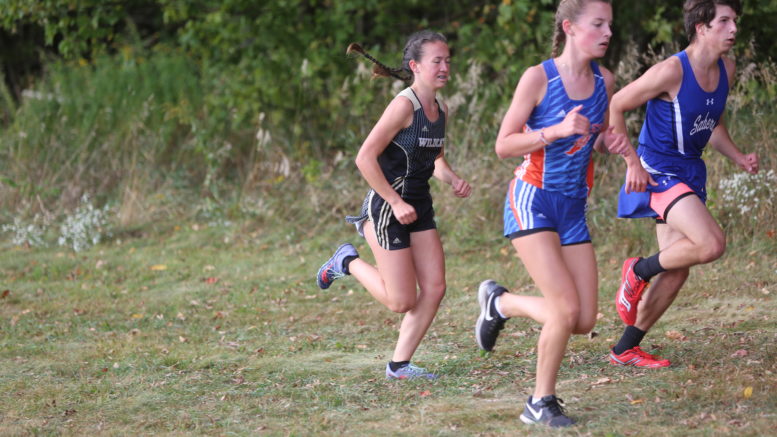 Mountain View's Kathryn Long (Middle) moves among the pack on her way to a second place finish at last week's meet at Lakeland High School. Long finished second behind Forest City's Rachel Korty. Alongside Long is Susquehanna's Chayce Quaranta who helped the Sabers to three wins at the meet.

Cross Country runners enjoyed the extended summer weather on the

Forest City’s Rachel Korty sets the pace on her way to winning last week’s Cross Country meet at Lakeland High School. Korty won in a time of 20:16 and led Forest City to a win over Western Wayne.

second day of autumn as locals continued to find success on the course.

Elk Lake’s Krista Jones crossed the finish line in 19:50 to set a new course record and help lead the Lady Warriors to a pair of victories over Mid Valley and West Scranton.

Montrose claimed four wins led by the third and fourth finishes of Paige Brewer and Hannah Perkins and the seventh-place finish of Stephanie Summerville. Brewer crossed in 20:49 while Perkins finished in 21:01 and Summerville at 21:39.

The Lady Meteors also had Elizabeth Chidester (23:42) and Annika Bixby (23:53) finish in the top 15 as they claimed wins over Mid Valley, West Scranton, Elk Lake and Blue Ridge.

On the boys’ side, Nick Coy finished second in 17:53 to lead Montrose to four wins.

Blue Ridge’s Jack Condron set a school record with a time of 18:23 to take sixth place and lead the Raiders over West Scranton.

At Lakeland, Forest City’s Rachel Korty finished in 20:16 to claim the individual winner in the girls’ race and lead the Lady Foresters to a 10-11 win over Western Wayne.

Mountain View’s Kathryn Long was second in 21 minutes even and combined with GG Larkin who finished eighth in 22:09 to lead the Lady Eagles to wins over Forest City and Susquehanna.

Susquehanna earned a pair of wins by defeating Forest City and Western Wayne.

The Sabers’ Austin Gow claimed the boy’s race in 17:41 to lead Susquehanna 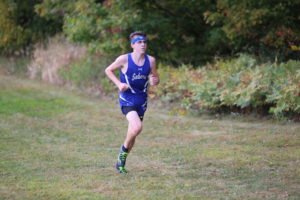 Mountain View’s Aiden Long was 13th in 19:09 to help the Eagles earn wins over Forest City and Western Wayne; while Matthew Korty placed ninth with a time of 18:59 to lead Forest City over Western Wayne.

Susquehanna Community to return to 4-days of in-person classes

Be the first to comment on "Jones, Korty, Meteors enjoy fall"