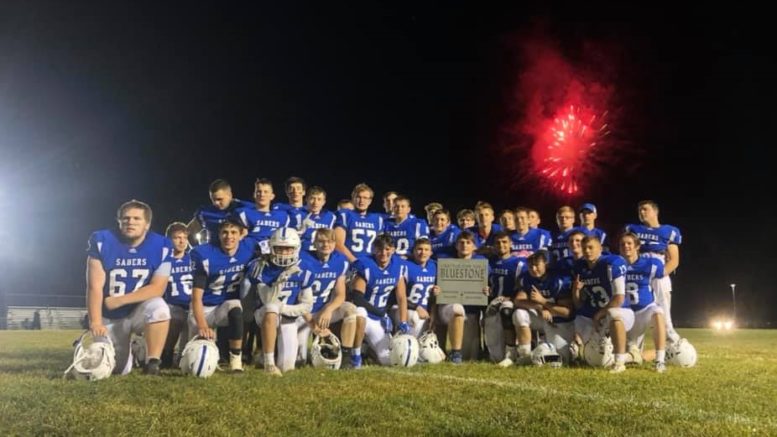 Susquehanna players pose as fireworks fill the sky after retaining the Bluestone Trophy with a 44-13 victory over Montrose. The Sabers won for the eighth time in the annual game's nine-year history. PHOTO COURTESY Kyle Cook

The Stone stays in Susquehanna. 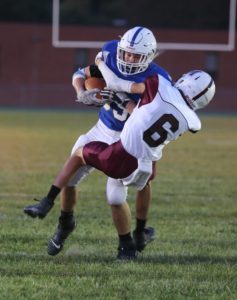 Montrose’s Gus Brown (6) attempts to bring down a Susquehanna Running Back Calvin Scheideler during the annual Bluestone Game held at Susquehanna on Friday night. PHOTO BY ED KING

Susquehanna to come away with their first win of the season and retain the Battle for Bluestone trophy as it defeated Montrose 44-13 Friday night.

The annual battle between the county’s only two football programs, Susquehanna and Montrose, was played under lights brought in for the game.

Montrose moved the ball on the opening drive and was knocking on the endzone door when Suquehanna’s Calvin Scheideler picked off a pass on the two-yard line and returned the ball to the 32-yard line. 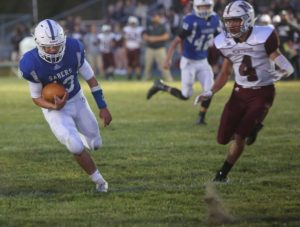 Susquehanna Quarterback Garrett Decker (#13) heads up field for some of his 101 yards rushing as Montrose’s Dominic Palmatier (#4) pursues. Decker scored a touchdown and threw for another on his way to winning the Thomas E. Robinson Memorial award. PHOTO BY ED KING

hit Spencer Beamer for a 23-yard completion and hooked up with Beamer again for a 20-yard scoring strike.

Ryan Koziol and Gavin Baker combined for strip sack to give Susquehanna possession on the 17 and scored on a six-yard run by Decker to go ahead 12-0.

Susquehanna wanted to be able to open the ground game by utilizing its seldom used passing game early.

“After watching film, we knew they wouldn’t respect our passing game,” said Decker. “We wanted to throw some passes and open things up for our run game.”

“On the touchdown, we saw corner blitz and he was open,” added Decker.

Early in the second quarter, Baker continued to wreak havoc in his return to the lineup after a knee injury sidelined him the team’s first four games. He again forced a fumble on a sack and Dalton Crowley recovered on the Meteors five-yard line.

Jesse DeLousia took a handoff into the endzone and Layne Fisk’s extra point gave the Sabers a 19-0 lead.

Koziol added another rushing score with just over a minute to go before intermission.

Montrose ran a hurry up offense attempting to score before halftime but turned the ball over on downs with 37 seconds remaining.

Decker scampered for 25 yards followed by a 14-yard run by Koziol.

Decker then hit Scheideler on the outside and the junior Running Back bolted 24 yards to the endzone as time expired. Decker added the extra point to give the Sabers a 32-0 halftime lead.

“My primary was actually on the other side of the field,” observed Decker. “But I knew if the safety went over to that side that would leave Calvin open.”

In the third quarter, Scheideler broke free for runs of 19 and 46 yards, as the Sabers stretched the lead. “It all starts with the line,” said Scheideler. “They practiced with a lot of energy this week and there was just a lot more room to run this week.”

Lineman Eli Aldrich agreed that the energy level was raised leading up to the Bluestone game and that added to the team’s concentration. “The guys were more focused on their tasks,” said Aldrich.

Sandwiched between Scheideler’s runs Montrose got onto the board when

Ethan Cina hit Dominic Palmatier 14 yards out for the touchdown.

Montrose added another score early in the fourth quarter when Dylan Geertgens rushed for a three-yard touchdown and Cina added the extra point for the eventual final score.

Scheideler finished the night with 111 yards rushing along with the 24-yard touchdown reception.

Decker completed three of five passes for 67 yards and earned the Thomas E. Robinson Memorial award given for outstanding play and respect shown toward opponents and officials.

“I was surprised because a couple other guys had really good games,” said Decker. “But it means a lot to me to get it.”

Cina finished the game 11-23 for 172 yards to along with the touchdown and interception. Damien Rohan had six catches for 126 of those yards and Palmatier added four receptions for 43 yards and the touchdown.

Be the first to comment on "Bluestone stays with Sabers"