Susquehanna Fullback Ryan Koziol (4) breaks through the line during the Homecoming game versus Northwest Area. The Sabers lost a heartbreaker 7-6 in front of their fans and alumni.

Within the grasp and painfully out of reach summed up the weekend for the area’s two football teams.

Susquehanna fell to favored Northwest Area 7-6 on Homecoming weekend while Montrose lost to Carbondale 30-12 in a game that was much closer than the final score indicated. 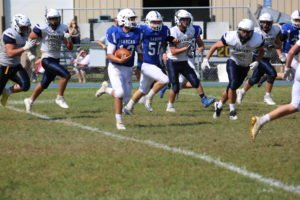 Susquehanna Quarterback Garrett Decker (13) breaks to the outside on his way to the game’s first touchdown in the first half of the Sabers’ 7-6 loss to Northwest. Decker had 110 yards rushing on the day.

contingent and alumni when Quarterback Garrett Decker faked a handoff, eluded one tackler and cut back against the grain and scampered 53 yards for a score as Susquehanna went ahead 6-0. The extra point failed but the inspired Sabers kept Northwest off the board until halftime.

“For me personally, Homecoming is a big game because you want to play well in front of all the past players that are there,” said Lineman Ryan Armitage.

Coming off their first win of the year over Montrose the week before Armitage felt the practices leading up to Saturday’s game were some of the better ones all year.

“I felt guys were very focused and there was improvement in our execution,” said Armitage.

But on the Rangers’ first drive after intermission they marched 75 yards on 11 plays to knot the game and despite a personal foul resulting in the extra point being attempted 15 yards deeper than normal Northwest’s Jack Wessler nailed it to provide the lead they would never relinquish. 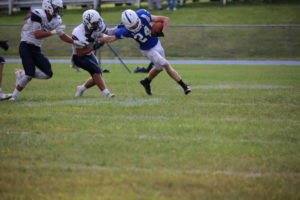 Susquehanna Running Back Layne (24) Fisk stiff arms a Northwest Area defender during Saturday’s Homecoming game. Fisk would later give the Sabers one last chance in their 7-6 loss when he forced a fumble late in the fourth quarter.

Northwest receiver after a reception and forced a fumble that Susquehanna recovered on its own 15.

But the rallying drive was thwarted when Northwest intercepted a forward lateral and was able to run out the clock.

Decker finished with 110 yards but was contained in the second half as he was held to negative four yards rushing.  Calvin Scheideler picked up 51 yards on 11 carries.

“I thought out tackling was better compared to what we did against other big backs,” said Decker. “But we just needed to execute a little better offensively in the second half.” 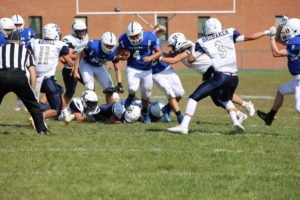 Susquehanna Fullback Ryan Koziol (4) breaks through the line during the Homecoming game versus Northwest Area. The Sabers lost a heartbreaker 7-6 in front of their fans and alumni. 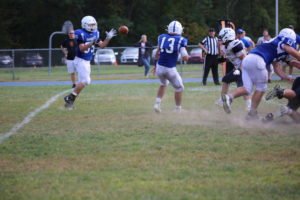 Susquehanna Quarterback Garrett Decker (13) pitches to Running Back Calvin Scheideler (35) in the Sabers’ game versus Northwest Area Saturday. Scheideler would pick up some of his 51 yards rushing on the play.

Carbondale used two big fourth-quarter drives to pull away from Montrose for the win.

Montrose struck first when Lineman Brayden Timms lined up as a Fullback and powered his way into the endzone from the one-yard line midway through the first quarter.

After Carbondale Quarterback Ray Ofner scored on a five-yard rush and added the two-point conversion, Montrose regained the lead 12-8 when Ethan Cina hit Damien Rohan for a 61-yard touchdown on the catch and run.

Ofner answered with a two-yard rushing touchdown just before halftime.

After both teams failed to score in the third quarter Vinny DePalma amassed 105 yards rushing and two touchdowns as the Chargers pulled away for the win.

Cina was 7-22 passing for 167 yards and a touchdown against one interception. He also added 63 yards on the ground in 10 carries.

Rohan finished with 77 yards on three receptions while Dylan Geertgens gained 85 yards on his three catches.

Be the first to comment on "Wins elude local football teams"