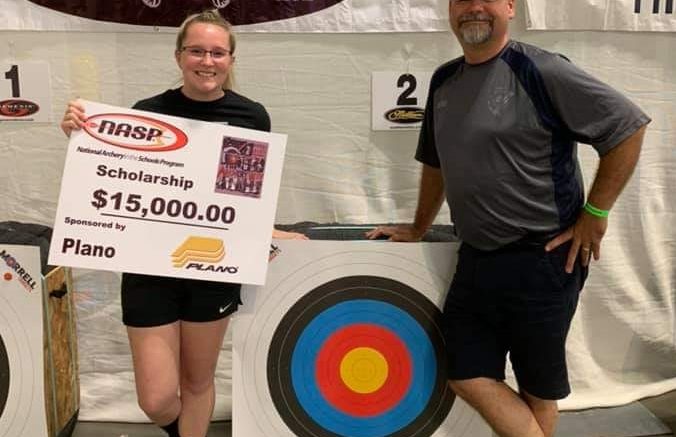 Susquehanna Community’s Kaylee Landry poses with her Coach John Ord after capturing second place and earning a $15,000 scholarship at the NASP Scholarship Shoot Out held during the NASP Open and Championship Tournaments in Nashville, Tenn., July 25-27. PHOTO BY PAUL TRUSKOLASKI

The Nashville sound was pierced by the arrows of local archers as several competitors traveled to Tennessee to compete in the 2019 NASP Open Championship Tournaments held July 25-27. 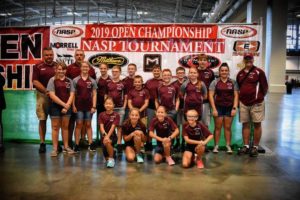 competing in both the high school and middle school divisions and a dozen from Lathrop Street Elementary, but Susquehanna Community High School’s Kaylee Landry took home the biggest prize earning a $15,000 scholarship.

Landry qualified as one of 18 archers in the Shoot Out and finished tied with Rain Beals of Kentucky with a score of 49 out of 50. In a shoot out Beals edged Landry for the top scholarship prize of $20,000.

The archers were able to compete in five different tournaments over the three days.

At the NASP IBO 3-D Championship Challenge – where archers shoot at three dimensional targets – Lathrop Street finished third in the team standings and Aiden Sprouse captured third place in the 5th grade boys individual standings. He was followed in the top 10 by Jeremy Henry who finished 8th.

Mark Hawk finished 12th in the 4th grade group and was followed by Cael Heed (19th) in the top 20. Daniel Powell finished 66th among 5th grade boys and Lucas Rozell was 62nd in fourth grade.

Mia Amorino and Zach Oleniacz both finished 18th in their respective grade divisions at the High School level and finished in the top 100 overall.

In the Middle School, Makenzie Krupinski finished ninth in the 6th grade girls and Madilynn Rhinevault placed 37th in the 7th grade group. Both finished in the top 100 overall at 51st and 92nd, respectively, in the field of 283.

In the NASP IBO 3-D Open tournament entered by only two local archers, Krupinski captured first place in the 6th grade girls to finish third overall in the Middle School Division. Rhinevault was right behind her teammate finishing third in the 7th grade division and fifth overall. 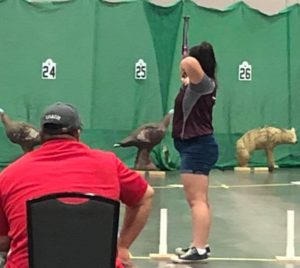 second among the 32 ninth grade girls that competed in the NASP Open Championships. She finished 13th overall in the High School Girls Division.

In the NASP 2019 Championship Tournament, Lathrop Street finished in the top 20 in the team scoring and placed five individuals in the top 100 in several grade levels.

Sprouse again led the way placing 12th in fifth grade boys and 13th overall in the Elementary boys category.  Joining him in the top 100 were Henry (56th) and Powell (84th)

In the Fourth Grade Division, Hawk placed 29th in the Boys along with Heed (58th) while Scheer finished 43rd in the girls.  Lucas Rozell and Ali Rhinevault also competed for the team.

In the High School Division, Landry finished 14th in the Senior Girls Division and 46th overall, while Oleniacz finished 19th in his class rank and 68th overall in the Boys High School.