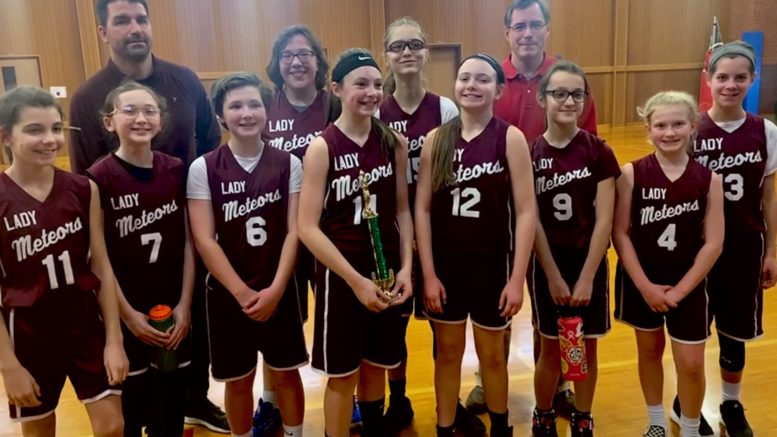 Behind 17 points from Kylie Shingler Montrose came from behind to edge regular season champion Mountain View Basketball Club to capture the Triboro Challenge 27-25.

In a matchup of the top two seeds from the 21 Hoops Endless Mountains Basketball Association Girls Senior Division, contrasting styles and strengths were on display.

After coming out of the first quarter tied, Montrose pushed ahead in the second quarter to take a 12-8 lead into intermission as Shingler and Ally Legg combined for eight points in the quarter.

MVBC answered in the third quarter going to the towering Addison Kilmer who poured in six points and the Little Lady Eagles outscored Montrose 10-4 to take 18-16 lead into the final quarter.

“Before the fourth quarter, I told them we were in good shape,” said Montrose Coach Andy Weller. “Keep getting out and being aggressive in transition, and that we had to do a better job on defense and boxing out.”

The Little Lady Meteors rallied in the fourth quarter as the slashing Shingler scored seven points to push Montrose to the crown.  But it was on the defensive end where Shingler had the most impact holding Kilmer to one field goal and two free throws.

“I moved Kylie to guard Kilmer in the fourth quarter,” said Montrose Coach Andy Weller. “She’s quicker but not as tall, but she did really well”

Shingler led Montrose with 17 points and Legg added six while Ava Martin chipped in with four.

Kilmer led MVBC with 11 points while Addison Tompkins finished with six and Ava Piasecki and Haley Bills chipped in with four and two respectively.

Be the first to comment on "Montrose Girls EMBA Champs"