Four Montrose Area High School seniors have been recognized as AP Scholars by the College Board for their performances on last spring's AP exams. Each student scored a "4" or "5" on three different exams and all are taking multiple more exams this year. From left: Lacey Sanguinito, Angie Ford, Colin Spellman and Katie Puterbaugh. 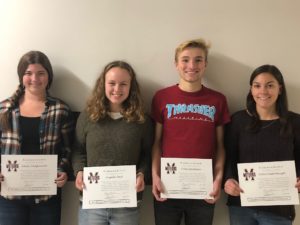 Four Montrose Area High School seniors have been recognized as AP Scholars by the College Board for their performances on last spring’s AP exams. Each student scored a “4” or “5” on three different exams and all are taking multiple more exams this year. From left: Lacey Sanguinito, Angie Ford, Colin Spellman and Katie Puterbaugh.

As the Montrose Area school directors met to fill a vacancy on the board last week, another board member resigned.

In a special meeting held Wednesday, Oct. 24, the board met with three candidates for the Region 1 (Montrose and Jessup Twp.) seat vacated by Amy Lyden. But prior to hearing from those looking to fill the seat, the board accepted the resignation of Madeline Arnold, a Region 2 school director, effective Oct. 9. Region 2 is comprised of Bridgewater, Franklin and Liberty townships.

The three candidates for the Region 1 seat included Pamela Staats, a former Montrose Area school board member and is the Director of Special Education in the Elk Lake School District; Aaron Sinkovich, an 11th grade English Teacher at Mountain View High School; and Stephen Wilcox, a local business owner. The candidates each gave a brief statement and participated in a question and answer session in front of the board.

Following the public interview, Staats was chosen by the board to fill the seat in an unanimous vote.

Staats noted her 37 years as an educator, and said that she had been involved with her own children’s education programs and sports in the Montrose Area School District. She served on the board for a number of years before losing the seat in an election and has not been a school board director for the past three years. She said she would not be looking to make changes, but to reestablish relationships from her prior service.

Sinkovich said that he would not be coming to the position with an agenda, but would be applying his strong sense of integrity and other values which he strives for in his classroom. His children attend Montrose Area schools and he offered that he looks at service on a school board as an opportunity to develop organizational leadership skills and to be involved in his community.

Wilcox serves as a Harford Fair director, as well as on other local boards. He told the board his business acumen and sense of duty to fellow taxpayers would help him in decision making. “To get a boat across the lake, everyone needs to be rowing in the same direction,” he said.

Staats was  sworn in by Board President Mary Homan.

Board Member Richard Jordan said, “I felt I had more impact in the school community in that role than since I’ve been a school board director. I also felt I had direct access to the superintendent as a community advisory committee member.”

Board Member Paul Adams added, “I got my start on the school Community Advisory Committee, getting involved with a safety issue.”

Superintendent Chris McComb said that Wilcox and Sinkovich, as well as others present, were welcome to attend the next Community Advisory Committee meeting, slated for Thursday, Nov. 29 at 7 p.m. in the high school library.

The next regular school board business meeting will be held Monday, Nov. 12, at 7 p.m., in the Community Learning Center at the Junior-Senior High School.

Season of change for Sabers, Meteors

Be the first to comment on "Staats appointed to Montrose board; another school director resigns"