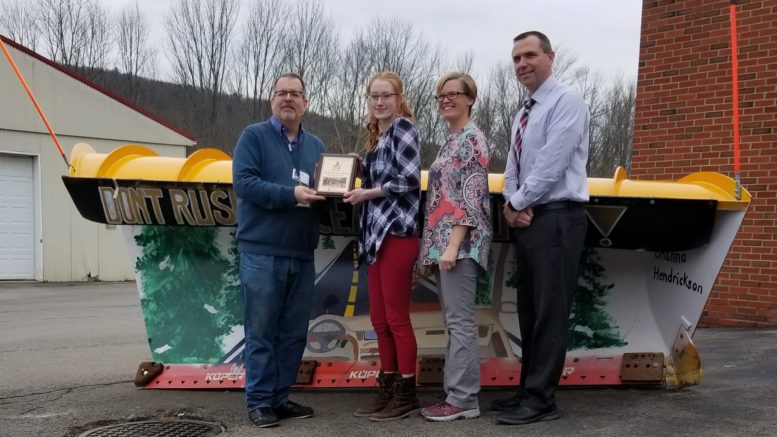 lue Ridge student Brianna Hendrickson, 17, was recognized by PennDOT on Monday, Jan. 13, as the Susquehanna County Judges’ Pick of this year’s Paint the Plow program.

The given theme was ‘Don’t Rush in Ice and Slush’, which Hendrickson drove home with a painted re-creation of a driver’s view when coming up on a deer in the headlights.

“It’s an important concept,” Hendrickson said. “You just never know when a deer is waiting around the corner, especially this time of year when the roads are wet.”

Hendrickson, of Great Bend, spent nearly two months working along on the project.

Sarah Dibble-Camburn, the Blue Ridge art teacher, approached Hendrickson in early September to ask if she would be interested and if she would like any help, but Hendrickson was confident in her abilities. She used spray paint designed for metal, which required plenty of taping, tearing, and re-taping her piece. She worked in heat, cold, and rain.

“Mrs. Camburn asked me almost every day, ‘Do you want my coat?’”

She suffered setbacks like spilled paint and daily precipitation, but pushed through to create an image she felt needed to be created. “I didn’t even know it was for a contest,” Hendrickson mentioned in passing.

The plow was painted outside of Blue Ridge’s art room, before being taken to PennDOT facility in Bridgewater Twp. It is temporarily resting, again, in the Blue Ridge parking lot.

Despite being an award-winning art piece, Hendrickson’s plow will get to see use on the roads during the winter months.

The Blue Ridge senior said that she would like to run a sanctuary in the future. “Especially with all that is happening in Australia. It’s a tragedy,” she said.