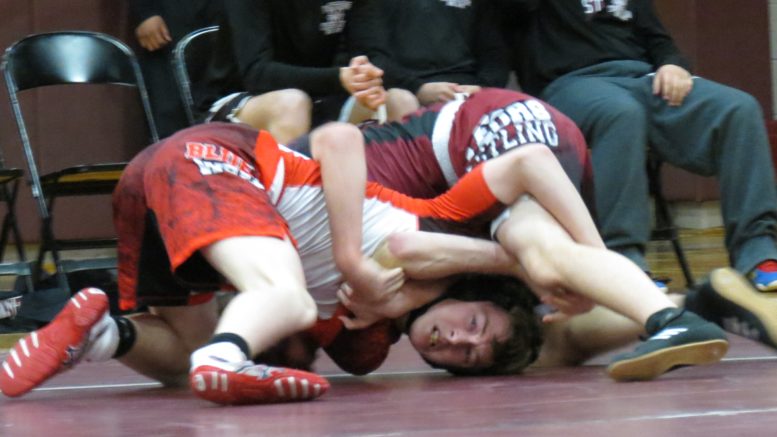 In action from last season Montrose’s Andrew Rosevear battles Raider Cole Soden. The two were in action against other wrestlers this week. STAFF PHOTO/STACI WILSON

The Raider were led by pins from Gavin Crawford, Kaleb Shimer, and Jordan Williams.

Williams went into the second period of the meet’s initial contest before pinning Noah Atkins at the 3:07 mark of the their 160-pound bout.

John Tyler led Elk Lake with a pin of Zach Consla at the 1:07 mark of their 182-pound match.

The Warriors also got wins from Todd Snyder at 138 when he decisioned Cole Soden 8-5 and Thaddeus Woodhead won 8-1 over Blue Ridge’s JD Heckman at 152 pounds.

Brendan Kanna continued his comeback from a leg injury suffered in football season with a pin of Logan Sprague in the third period of their 152-pound match.

Dylan Geertgens got the Meteors’ final pin when he put Caden Holtsmaster on his back at the 3:36 point of their 138-pound bout.

In the other wrestled match Montrose’s Jacob Craige edged Hunter Jones 9-7 at 160 pounds.

Jeremiah Schwartz earned the Eagles’ only pin when he decked Noah Smith in 21 seconds. Mountain View also got a forfeit win by Nathan Ofalt at 145 pounds.

Be the first to comment on "Raiders, Meteors earn league mat wins"