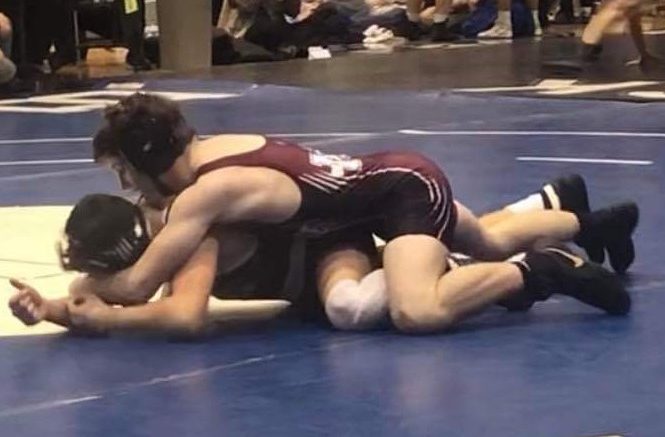 Montrose’s Dylan Geertgens battles during the Berwick Duals on January 19. Geertgens went 4-1 with a pin as Montrose went 2-3.

Montrose’s Nick Harder puts an opponent on his back during a match at the Berwick Duals. Harder was 5-0 on the day with two pins to lead the Meteors.

The Meteors opened with a 48-30 win over Catasaqua and closed out the day with a 45-36 victory over Nanticoke.

Nick Harder led the Meteors with a 5-0 record including two pins as he bounced between the 106 and 113-pound weight classes.

Dylan Geertgens went 4-1 at 126 pounds getting a pin against Catasaqua and a decision in the Berwick match.

Rosevear earned pins in all three of his victories while Craige and DeMann each had two pins.

Gavin Crawford led the Raiders with four pins and a forfeit victory to finish 5-0 for the day. Crawford had three pins within the first minute Dallas’ Kyle Langan in 27 seconds and needing only 42 seconds to take care of Crestwood’s Hunter Greenberg. He finished the day taking down Catasaqua’s Jacob Nye in 41 seconds.

Jordan Williams and Eli Aldrich went 3-2 for Blue Ridge. Williams had two pins and a major decision while Aldrich pinned Cody Deleyo of of Dallas in 23 seconds and picked up a pair of forfeit wins.

JD Heckman had two pins and Duane Consla added another for the Raiders.

Be the first to comment on "Meteors, Raiders battle in Berwick"