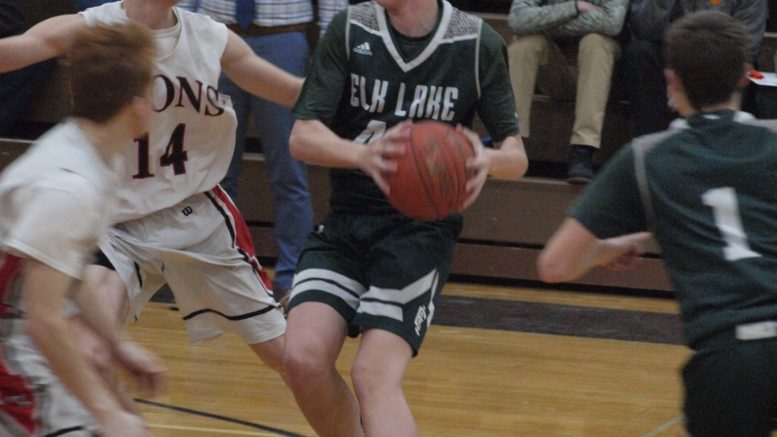 Elk Lake’s Wyatt Casselbury (with ball) waits to hand off the ball to Jacob Gustin (1) after driving to basket versus Lackawanna Trail. The Warriors fell 64-54 to Trail after beating Montrose 75-49. Photo by Tammy Mowry 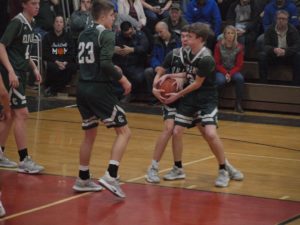 Due to the previous Saturday’s storm Elk Lake was playing for the second night in a row, having played rival Montrose the night before and Elk Lake’s gas tank ran empty in the fourth quarter as Blue Ridge erased eight-point deficit.

“I try to put work on my opponents, play tougher stronger, whatever it takes to put more points on the board,” said Rosa.

The Warriors moved ahead in the second period when Blue Ridge’s offense went cold and Matt Mowry scored four points for the Warriors. Scheideler had all five Raider points as Elk Lake held a 20-15 lead.

The Warriors jumped on Mowry’s back after intermission when the sophomore scored 17 and Elk Lake led 41-33. Rosa kept Blue Ridge in the game with 10 points of his own and kept the momentum going into the fourth quarter.

“It all comes down to keeping your foot on the pedal,” said Rosa. “Coach told us at halftime, that in order to win we needed to keep our energy up.”

Rosa finished with 30 points to lead Blue Ridge and Scheideler finished with 16. Mowry paced Elk Lake with 28 points and Marshall chipped in with 14.

The previous night the delayed rivalry game between Montrose and Elk Lake provided plenty of sizzle despite the cool winter air but eventually Elk Lake prevailed 75-49.

Both teams pushed the pace attempting to establish themselves early. The Warriors got the better end of the first quarter as Mowry provided a preview of the week scoring eight points to lead Elk Lake to a 19-11 lead. Dominic Palmatier and Ethan Cina combined for nine points to keep the Meteors within striking distance.

Montrose’s Trent Leonard scored seven points for the Meteors as they kept pace with Elk Lake. Mowry hit a pair of threes for the Warriors and Brant Marshall scored four as Elk Lake maintained a 33-25 lead at intermission.

After halftime Mowry and Marshall helped the Warriors take control of the game as Mowry scored nine points and Marshall added six as Elk Lake pushed the lead to 54-37. Montrose Freshman Sam Stashko had six points for the Meteors during the quarter.

“Matt and Brant are working really well together and are benefitting from each other,” said Elk Lake Coach Richard Emmons.

Trever Graham helped Elk Lake salt the game away in the fourth converting four of five free throw attempts hitting his second three-pointer on the night while Caden Ramey scored five points for the Warriors who finished off the 75-49 victory.

Mowry finished with 27 points to lead Elk Lake while Marshall added 18 and Graham chipped in with 13.

Leonard and Connor Watkins finished with 12 points to lead Montrose while Palmatier added 10 and Stashko had eight.

Susquehanna used a push in the third quarter to defeat Forest City 48-43.

Both offensese started off slowly as the Sabers opened with a 8-4 lead after one quarter.

Forest City’s offense began to click, and the Foresters took advantage of a couple Saber turnovers to knot the game at halftime with a 12-8 advantage.

After intermission Susquehanna’s Jakub Tomczyk and Garrett Decker combined for eight points and the Sabers pushed ahead 34-30.

Tomczyk led Susquehanna with 17 points and he and Matt Phillips each knocked down three three-pointers. Phillips finished with 11 points and Decker chipped in with 10.

Mountain View continued to utilize a big second quarter to get past Montrose 54-42 to begin their three-game week.

The score was knotted at 11 after the first quarter as Mountain View’s Wyatt Brozonis and Connor Watkins from Montrose each scored five points to lead their teams.

In the second quarter Michael Fanelli scored 11 points and the Eagles held Montrose to two field goals as Mountain View doubled up Montrose and took a 25-18 lead into the locker room.

Sam Stashko scored seven for Montrose as the offense began to show some life but Preston Petts answered with 10 for the Eagles and Montrose never threatened.

Fanelli paced Mountain View with 17 points and Petts finished with 11. Tyler Henke added eight points for the Eagles while Brozonis and Gillyard chipped in with seven each.