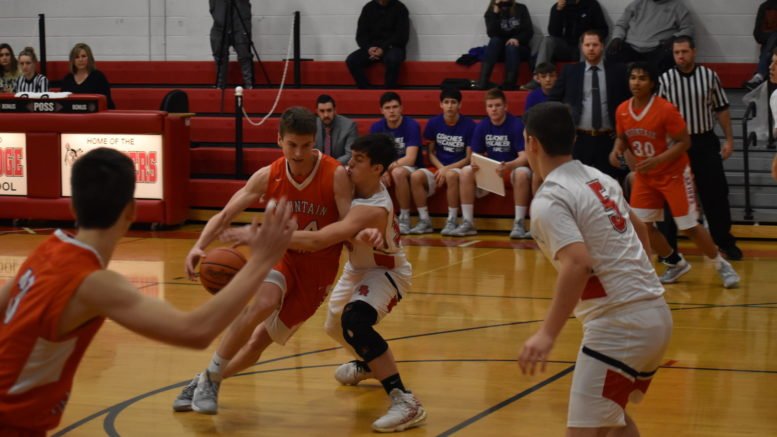 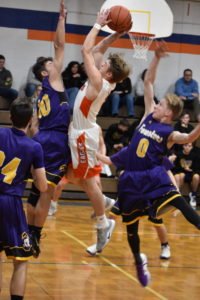 circumstances to stay on the heels of division-leading Lackawanna Trail.

Coming off a win over Montrose the Eagles faced rival Forest City in a makeup delayed from four days earlier and Senior Michael Fanelli made sure there would be no let down and led Mountain View to a 50-37 victory.

Fanelli scored 13 of his game-high 15 points in the first half, scoring seven in the opening quarter as the Eagles went on a 14-2 run after falling behind 5-0 to lead 14-7 at the conclusion of the first quarter.

“We gained the lead by moving the ball well against their zone defense and giving up good shots for great shots,” explained Fanelli.

Forest City tightened up the defense in the second quarter holding Fanelli to a pair of three-point field goals. But the Foresters could not generate much offensively and trailed 22-15 at intermission.

Justin D’Antonio scored five points in the third quarter as Forest City nearly doubled their output and held Fanelli in check to cut the Eagle lead to 33-27. Tyler and Ryan Henke combined for nine of the Mountain View points. 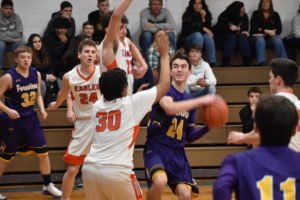 In the fourth quarter Mountain View Sixth-man extraordinaire Preston Petts helped put the game out of reach scoring eight points and grabbing a pair of key rebounds and Wyatt Brozonis was 4-5 from the free throw line down the stretch.

Fanelli’s 15 paced Mountain View and Petts finished with 12 and Ryan Henke had eight. Brozonis and Tyler Henke each chipped in with six. Jay Lipko scored nine to lead the Foresters.

The Eagles completed their week in bizarre fashion as they needed two days to earn a 48-38 win over Blue Ridge.

Mountain View led 27-22 with 3:55 left in the third quarter when a power outage at Blue Ridge High School postponed the game to the following afternoon.

Both offenses lacked electricity to begin the game as both defenses contested every shot and Mountain View held a 6-4 lead at the end of the first quarter.

In the second quarter the offenses loosened up as Mountain View’s Jalique Gillyard knocked down two of his game-high five three-pointers in the quarter and Fanelli added five points as Mountain View offset seven points from Gavin Rosa to lead 19-14 at intermission. 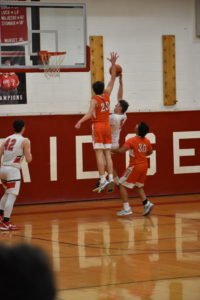 “Rosa was coming off a great game versus Elk Lake,” said Fanelli. “We knew we had to provide help and force him to his left side as much as possible.”

When play resumed the following afternoon Mountain View closed out the quarter with an 8-5 advantage and led 35-27 going into the fourth. Ben Bleck and Tyler Hillard combined for 10 of the Raider points but threes from Gillyard and Fanelli gave the Eagles the momentum.

Both teams dealt with the strange circumstances and attempted to adjust.

“it was certainly a different experience,” said Rosa. “Some players have a pregame ritual or certain ways to prepare for a game and not being able to do these things can throw off the whole game.”

“We went home that night and acted as if it was just another Saturday afternoon game starting 0-0,” explained Fanelli.

Despite Mountain View struggling at the free throw line in the final quarter Blue Ridge was unable to generate any momentum. Hillard had five points for Blue Ridge but Fanelli sank all four of his free throw attempts and Brozonis connected on two of his final three to salt the win.

Fanelli again led Mountain View with 17 points and Gillyard finished with 15 while Brozonis chipped in with eight.

Lackawanna Trail maintained their one-game lead over Mountain View and set up last night’s showdown with the Eagles with a 64-54 win over Elk Lake.

The Warriors jumped ahead in the first quarter as Matt Mowry remained hot for the week scoring eight points in the period and Elk Lake led 12-10.

Trail surged ahead in the second as Richard Helbing and Nico Berrios combined for 13 points and the Lions offset eight combined points from Mowry and Brant Marshall to lead 28-24.

After halftime Berrios heated up converting three fields goals from beyond the arc and scoring 13 points as Trail pushed the lead to 46-38. Marshall had 10 points to keep the Warriors within striking distance.

In the fourth quarter Trail converted 13 of 17 free throws and Josh Rzcidulo hit an early three to quelch any Elk Lake rally despite a combine 11 points from Marshall and Jason Mowry.

Be the first to comment on "Lights go out, Eagles still shine."