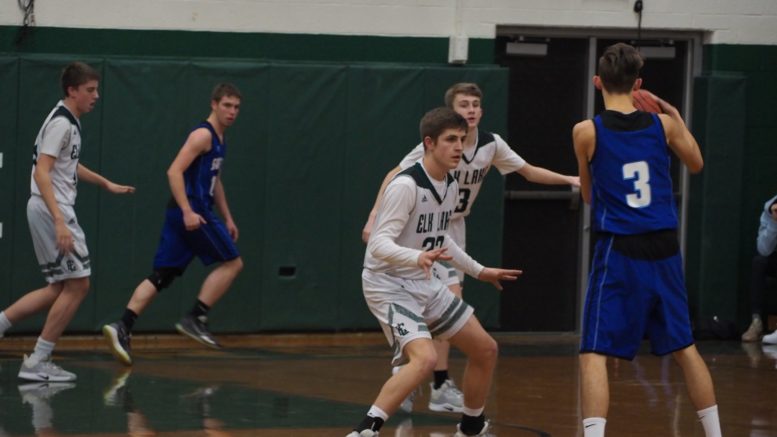 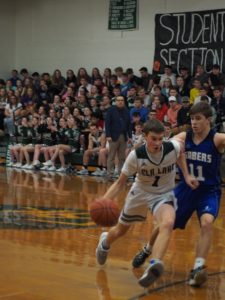 tournament championship game as the Warriors defeated the Sabers 46-44 to get their first league win.

With Elk Lake up 14 midway through the fourth quarter Susquehanna went on a three-point barrage as Garrett Decker nailed three and Jakub Tomczyk added another as the Sabers pulled within two.

“I knew I hadn’t hit a three in a while, so once I hit one that really fired the team up,” said Decker. “The whole energy of the game changed.”

“We slowed down our pace late and they got hot,” said Emmons.

Both offenses came out firing in the first quarter as Elk Lake grabbed a 17-12 advantage behind Brant Marshall and Matt Mowry who combined for 10 points to offset eight points scored by Susquehanna’s Gavin Baker.

Susquehanna evened the score at halftime with a 9-4 advantage as five different Sabers scored during the quarter.

“I emphasized to the guys during the break, that the game was far from over,” said Susquehanna Coach Lawrence Tompkins. “We needed to continue to get good shots at the basket on every possession but needed to get defensive stops, too.” 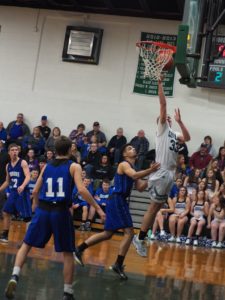 Elk Lake seized control in the third quarter as Mowry scored eight points and led 39-29 going into the fourth quarter.

Mowry finished with 17 to lead Elk Lake while Marshall had 16.

Decker led Susquehanna with 17 and Baker finished with 16.

The Warriors overcame a five-point halftime deficit to prevail in overtime 47-42.

Trever Graham’s only bucket of the game and ensuing free throw with three seconds left in regulation forced overtime where the Warriors won the battle of the free throw line netting six of ten attempts while the Black Knights went 1-4.

Elk Lake jumped out first with a 9-6 lead after one quarter as Mowry scored four points to lead the way.

Towanda got on track offensively in the second as Jyshire Robinson and Kolby Hoffman combined for 10 points as the Knights took a 20-15 halftime lead.

The Warriors cut the lead to one by the end of the third quarter as Marshall scored six and Mowry added five more to trail 27-26.

The game swung back and forth in the final stanza as Mowry and Marshall again combined for 11 points before Graham’s late-game heroics.

Mowry led the way for Elk Lake with 22 points and Marshall finished with 12 while Graham and Jacob Gustin were a combined 7-9 from the free throw line.

“Two tight games like that show how resilient our kids are,” said Emmons. “Our kids were visibly wore out by the of the second game, but they still managed to find a way to tie the game with three seconds left and pull one out in overtime.”

Blue Ridge used a dominating second quarter to take control of the game in a 67-53 win over Montrose.

The Raiders opened with a 9-7 lead after one quarter as Gavin Rosa scored six points.

Blue Ridge erupted for 21 points in the second stanza as Ben Bleck scored six while Rosa, Carson Koehler, and Cavlin Scheideler had four to take a 30-9 lead into intermission.

The Raiders kept ticking after halftime, but Montrose’s offense also came alive as both teams scored 23 points. Trent Leonard and Sam Stashko each scored eight to ignite the Meteors, while Koehler had eight for the Raiders.

Montrose kept up the pace in the fourth as Leonard and Connor Watkins each scored five as Montrose outscored Blue Ridge 23-14.

Rosa finished with 16 to lead the balanced Raiders attack. Koehler added 14 and Scheideler had 13 while Bleck chipped in with 10.

Trent Leonard led Montrose with 15 and Sam Stashko had 11.

Mountain View was outscored 31-19 during the middle quarters in their 45-31 loss to Riverside in a divisional crossover matchup.

The Eagles led 6-4 after the first quarter but the offense stayed cool and the Vikings scored 12 to take a 16-11 lead into intermission.

Riverside extended the lead into double digits in third quarter to take a 35-25 lead.

Lackawanna Trail won every quarter and slowly pulled away from Forest City for a 44-34 win.

Slow offensive starts each half doomed the Foresters who managed only three points in the first and third quarters.

Be the first to comment on "Warriors take two, claim rematch"