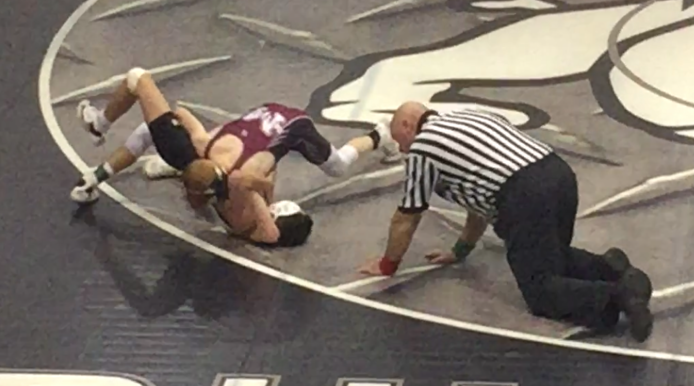 Montrose’s Nick Harder puts an opponent on his back during a match at the Berwick Duals. Harder was 5-0 on the day with two pins to lead the Meteors.

The Meteors grabbed the early lead after Brandon Soules opened the match with a forfeit win at 132 pounds followed by Dylan Geertgens pinning Blue Ridge’s Cole Soden early in the third period.

Kaleb Shimer got Blue Ridge on the board when he pinned Andrew Rosevear at 145 pounds in 3:25

Brendan Kanna extended Montrose’s lead when he took a 4-2 decision from JD Heckman.

Blue Ridge slowed the Montrose momentum and took the lead starting at 160 pounds when Jordan Williams needed just 1:42 to pin Ramon Carrero and was followed by Zach Consla who pinned Montrose’s Jacob Craige at 170 pounds late in the second period to give Blue Ridge an 18-15 lead.

Montrose reclaimed the lead in the following two matches at Devon Ford earned a forfeit win at 182 pounds and Derrick DeMann pinned Ryan Armitage late in their 195-pound match taking the six points at the 5:34 mark and giving the Meteors their last lead.

After Eli Aldrich picked up a forfeit at 220 pounds Blue Ridge dominated the match as Logan Hodge pinned Seamus Fisha at 285 pounds in the first period and was followed by Memphis Collins at 106 who decked Evan Miller at the 2:36 mark.

Blue Ridge’s Gavin Crawford earned a pin at 113 taking Nick Harder down in the second period at 3:46, and Kameron Sheffer closed out the final wrestled match with a pin of Larissa Taylor at 3:09.

Montrose picked up a final six points when James Bixby earned a forfeit at 126.

The Meteors got pins from Rosevear, DeMann, and Craige.

Rosevear pinned Prep’s Jason Yanul in a mere 47 seconds after Montrose fell behind 12-3.

Craige’s pin of Luca Dennis at 170 pounds late in the second period evened the match at 18.

Once again trailing 24-18 DeMann brought the Meteors even with a pin of Matthew Evans with six second left in regulation.

Geertgens earned Montrose’s first points with a 6-0 decision over Sean Monahan at 126 pounds in the meets opening match, Kanna picked up a 4-2 decision over Pat Mariotti at 152 pounds.

Scranton Prep took advantage of six forfeit wins on their way to a 57-12 win over Mountain View.

The Eagles were led by Nathan Ofalt who earned a pin at 145 pounds. Ofalt put Prep’s Yanul on his back at the 1:38 mark of the first period.

Hunter Lovelace earned six points when he collected a forfeit at 120 pounds.

Be the first to comment on "BR grapplers rally past Meteors"