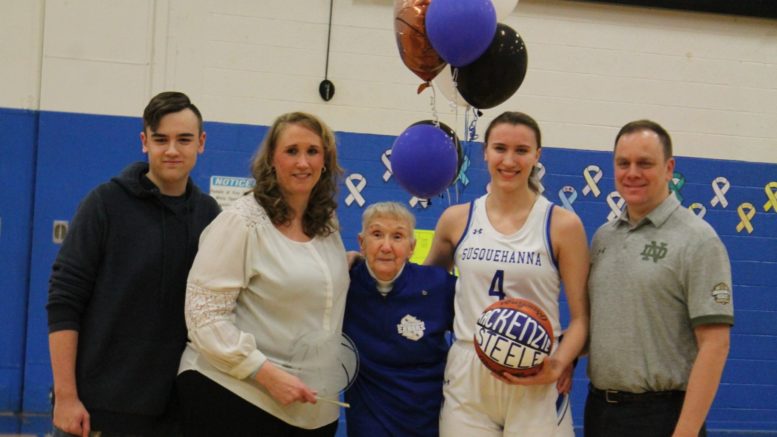 Needing just three points heading to join the 1,000-point scoring club Mackenzie Steele and her Susquehanna teammates were quick to the task.

Steele reached the plateau with her second of four field goals in the first quarter and the Lady Sabers jumped out to a 19-3 advantage and sailed to a 65-17 victory.

“It wasn’t pretty, but it went in,” said Steele of her milestone bucket.

The moment wasn’t lost on Steele however who praised her teammates and the support of her family during her distinguished career.

“It means a lot to me, and to know it was possible because of my teammates getting me the ball,” Steele noted.

“My Mom (Assistant Coach Dawn Steele) and Dad come to every game, and so does my grandmother,” said Steele. “It means so much to do this in front of them.”

In the second quarter Susquehanna put the game out of reach as Taylor Huyck nailed a pair of treys and Megan Decker scored four points as the Lady Sabers extended the lead to 37-9 at halftime.

Steele and Huyck combined for a dozen points in the third quarter before Susquehanna Coach Kirk Fallon relieved his starters.

Steele finished with 17 points and Huyck added 15 while Alexandria Iveson chipped in with 10 points as ten different Lady Sabers scored.

At Mountain View Montrose wore down an undermanned Lady Eagles roster and rode the coattails of Tangi Smith and Mia Snyder to roll to a 54-35 victory.

Smith and Snyder combined for 10 points as Montrose led 12-5 after the opening quarter.

Smith tacked on seven more in the second as the Lady Meteors stretched the lead to double digits taking a 26-16 advantage into intermission. Regan Cameron scored for seven for Mountain View as the Lady Eagle offense showed life.

Montrose put the game out of reach after halftime as Snyder scored eight and Smith added seven more and the Lady Meteor lead ballooned to 43-25.

Smith and Snyder each finished with 20 points to lead Montrose and Haley Pompey added eight. Cameron paced Mountain View with 11 points while Abby Neri and Jade Travis chipped in with eight and seven points.

In Dimock Elk Lake held Blue Ridge under double figures each quarter and used a balanced attack to claim a 63-24 win over Blue Ridge.

Elk Lake extended their lead in the second quarter as Lily Decker scored seven points and Blue Ridge failed to take advantage at the free throw line. Ashley Torres converted seven of eight attempts, but the Lady Raiders were a combined 8-18 and Elk Lake led 31-10 at the half.

Delaney Curley scored six points for Elk Lake as the teams each scored seven for the final tally.

Jones led Elk Lake’s balanced attack with 16 points and six assists while Curley added a career-high 10 points. Johns finished with nine points while Decker, Voda, and Zajaczkowski each chipped in with eight points.

Torres led Blue Ridge with 13 points by going 11-17 from the free throw line.

Be the first to comment on "Steele hits milestone, Lady Sabers roll"