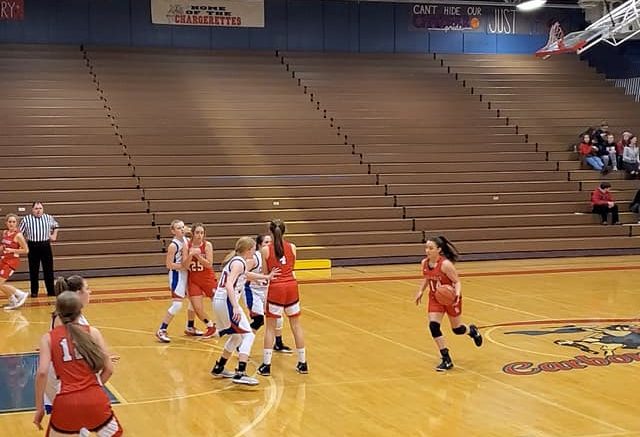 Blue Ridge’s Ashley Torres (14) drives off a screen from teammate Lilly Bleck (4) during the Lady Raiders’ game versus Carbondale. Torres finished with a career high 17 points.

and Montrose square off in Montrose, while Susquehanna maintained its lead atop of the standings.

Montrose put the defensive clamps on and held Elk Lake to nine points over the middle quarters to claim a 55-25 win over its archrival.

The Lady Meteors took the lead early as Haley Pompey and Ciara Hundley each scored six points for a 17-11 advantage after the first quarter.

From there the Elk Lake offense stalled as Montrose outscored the Lady Warriors 13-2 in the second quarter as Pompey added six more points to lead the charge.

After halftime Elk Lake’s offense remained off track and Montrose increased the lead to 43-20 as Tangi Smith and Mia Snyder combined for eight points.

Pompey led the way for Montrose with 16 points while Hundley had 13 and Snyder chipped in with 11. Mercedes Zajaczkowski had eight to lead Elk Lake.

Susquehanna used a run at the end of the second quarter to pull away from Lackawanna Trail and defeat the Lady Lions 53-29.

After going up 18-8 after the first quarter, Susquehanna saw Trail cut the lead to sevne half before finishing on 8-0 run. Mackenzie Steele scored 11 of her game-high 17 points in the first half.

Susquehanna sustained the momentum after intermission to outscore Trail 11-5 in the third quarter and put the game out of reach.

Along with Steele’s 17 points Amanda Iveson and Meghan Kiernan each scored 10 points to lead the Lady Sabers.

Mountain View held Forest City to three field goals in the first half on their way to a 37-15.

Taylor Neri scored five of her 10 points in the opening quarter as Mountain View built a 12-2 advantage.

Mountain View upped its lead over the middle quarters outscoring the Lady Foresters 14-9 before erupting for 11 points in the final stanza while holding Forest City to four points.

Morgan Hammond led the way for Mountain View with 11 points while Neri’s 10 was aided by Regan Cameron with nine points.

Despite a career-high 17 points from Ashley Torres Blue Ridge fell to Carbondale in divisional crossover game.

The Lady Raiders trailed 15-11 at intermission when Carbondale outscored Blue Ridge 16-8 in the third quarter.

Be the first to comment on "Lady Meteors edge rival, Susky maintains lead"