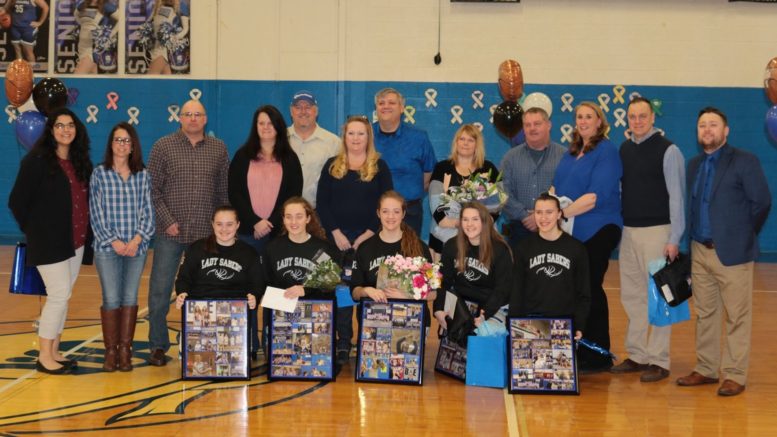 The Lady Sabers extended the lead before halftime as Huyck was a perfect 3-3 from the line and added two field goals to lead Susquehanna to a 31-14 advantage.

Susquehanna kept the foot on the gas outscoring the Lady Lions 24-10 after intermission as Megan Kiernan scored eight points and Steele chipped in with six to lead the charge. Steele also gathered her monumental rebound during the quarter to become the first Lady Saber to record both a 1,000 points and rebounds in their ca

Huyck finished with 17 points to lead Susquehanna while Steele added 14 and Kiernan chipped in with 12. Mackenzie Heath nailed three three-pointers and joined the group in double figures with 11.

While Susquehanna’s repeat was highly anticipated Coach Kirk Fallon praised his team’s focus and ability to not get caught up in preseason assumptions.

“We knew going into the season we’d be the favorites,” said Fallon. “But you still have to go out, win the games and not lose focus.”

“A lot of the teams in our division are young and have bright futures, so they don’t care how good we’ve been,” explained Fallon. “They just want to be the team that ends our run.”

Two of the teams Fallon pointed out took to the court in their own showdown February 10.

Montrose used a quick start and pulled away in the fourth quarter to spoil Senior Night at Elk Lake with a 61-46 win over their archrivals.

Lizzy Lathrop, Tangi Smith, and Haley Pompey each scored four points as the Lady Meteors built a 16-7 lead after the first quarter.

Mercedes Zajaczkowski and Tamara Voda combined for 11 points as Elk Lake’s offense picked up and the Lady Warriors cut the lead to 30-22 at halftime. Pompey had eight to help Montrose maintain their advantage.

Elk Lake continued to chip into the Montrose lead after halftime outscoring the Lady Meteors in the third quarter 14-12. Zajaczkowski and Lily Decker combined for eight points to lead a balanced attack.

Montrose stifled the Lady Warrior comeback as the combination of Pompey and Mia Snyder proved too much for Elk Lake with each scoring eight points as the Lady Meteors pulled away with a 19-10 advantage.

Pompey led Montrose finishing with 24 points and Snyder and Smith added 11 each. Lathrop chipped in with eight and Chalice Guyette had seven.

Zajaczkowski’s double dobule led Elk Lake as she scored 16 points and snared 13 rebounds in her final game on the Elk Lake floor. Voda finished with 14 and Decker chipped in eight points for the Lady Warriors.

Mountain View saw their lone Senior Abby Neri off with a come from behind victory as the Lady Eagles defeated Forest City 43-35 on Senior Night.

After Mountain View led 8-6 after the first quarter, Forest City held a rare first half lead by outscoring Mountain View 12-9 in the second quarter and take a 18-17 lead into halftime behind 10 points from Bella Pleska.

After intermission the Lady Eagles locked in on stopping Pleska, while Neri and Regan Cameron each scored five points and Mountain View outscored the Lady Foresters 14-7 to retake the lead.

In the fourth quarter Cameron was 5-6 from the line to help Mountain View withstand a strong quarter by Forest City Freshman Haylee Hermmann.

Cameron had 19 points to lead Mountain View while Morgan Hammond chipped in with six and Neri and Jade Travis finished with five.

Pleska finished with a game-high 21 to lead Forest City while Hermmann finished with eight and Madeline Shema chipped in with six.

At Blue Ridge, Carbondale were unruly guests as the Lady Chargers jumped out to an early lead and kept the Lady Raiders under double digits each quarter in a 47-21 LIAA Division III/IV crossover game.