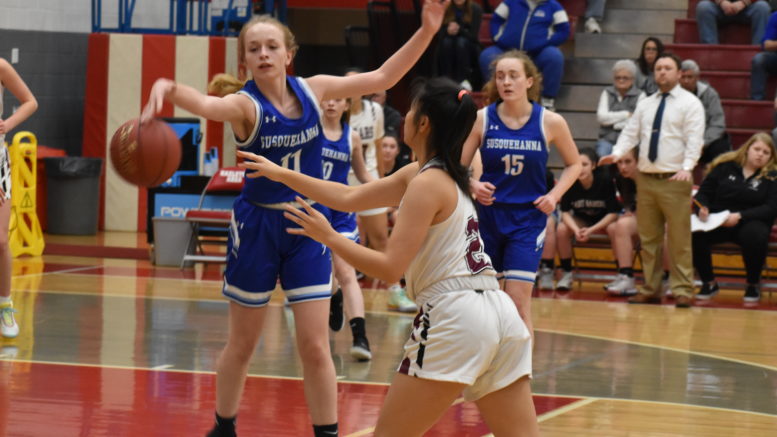 Heroes derive from surprising places during the postseason. 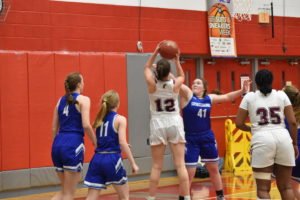 Nowhere was that more apparent than at Hazleton High Area High School when Susquehanna continued its march in the PIAA Class A state basketball playoffs with a 35-25 win over Lancaster Country Day.

On a night when the Lady Sabers’ trio of steady Seniors were kept in check, Sophomore Megan Decker made some noise.

While the stat line seemed modest, four points and four rebounds to go along with an astounding five steals it was the timing of Decker’s plays that cemented the night and sent Susquehanna to the state quarterfinals for the second year in a row.

On a night when points were limited and Susquehanna clinging to a 20-17 lead  early in the fourth quarter, Decker drove the lane and lofted a soft shot that kissed off the glass and gave the Lady Sabers a 22-17 lead and a little breathing room.

“Sometimes we need someone else to step up and help everybody, and I feel I can do that,” said Decker. 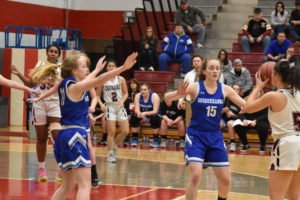 extend the Lady Sabers lead. She also had three of her five steals during the quarter.

“I know what those two girls (Megan and twin sister Mackenzie) are capable of,” said Susquehanna Coach Kirk Fallon. “They go up against (Mackenzie)Steele, (Taylor) Huyck, and (Mackenzie) Heath every single day and hold their own and are comfortable…they haven’t always shown it against other teams, but these last couple games they’ve been more comfortable that could be the difference.”

Susquehanna began the game slowly trailing 8-5 after the first quarter.  However, in the second quarter the defensive tenacity picked up. The Lady Sabers doubled down on Lancaster Country Day’s all-time leading scorer Ashanti Duncan and held her and the Cougars to a single field goal in the second quarter.

“We did a good job of doubling Duncan in our zone,” said Fallon. “But they surround her with good shooters and our defense did a really good job of scrambling after she kicked if out.” 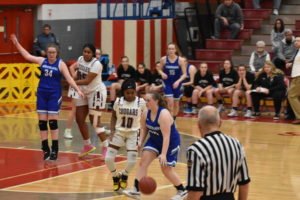 Feeding off their defense Susquehanna’s offense opened up as Heath and Geena Miller each connected from downtown with three-pointers while Huyck and Steele each added a field goal as Susquehanna took a 15-10 lead into halftime.

After intermission both teams continued to struggle offensively. On the evening Susquehanna was only 14-31 from the field and Lancaster Country Day was far worse shooting 7-39.

Leading 20-15 heading into the fourth quarter, Susquehanna used Decker’s key plays to go along with steady play of its two stars Steele and Huyck, as the duo combined for nine points in the decisive quarter.

Huyck answered the Cougars’ last rally with back to back field goals, and after Miller’s putback Steele finished a drop step to the middle to seemingly put the game out of reach, 32-22, with just over two minutes to play.

Steele and Heath led the way with nine points for Susquehanna. Steele 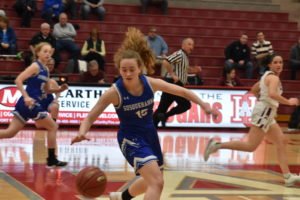 added 10 rebounds and six blocked shots. Huyck finished with six while Miller added five and Megan Kiernan chipped in with a field goal.

Experience carries Lady Sabers to next round