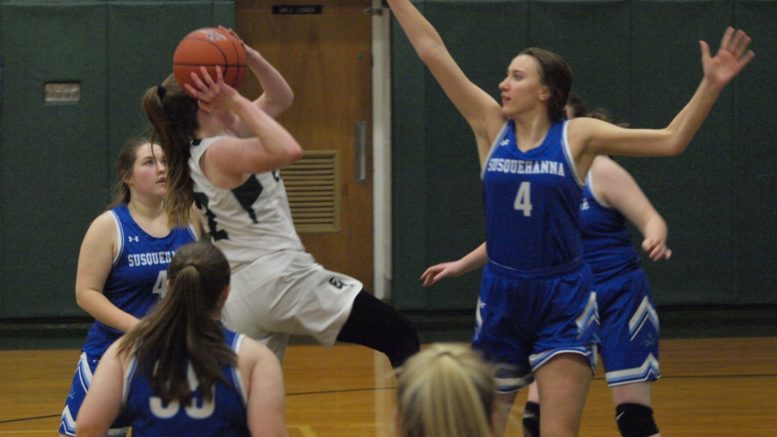 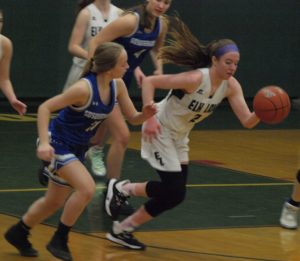 combined for 31 points and the Lady Sabers held off pesky Elk Lake 52-36 to remain undefeated in league play.

Steele and Huyck combined for 10 points and classmate Makenzie Heath buried two three pointers as Susquehanna took an early 16-9 lead after the first quarter. Aggressive Elk Lake got to the free throw line converting five of six attempts in the quarter.

Susquehanna extended the lead in the second quarter but couldn’t put Elk Lake away taking a 30-19 lead into intermission. Krista Jones scored six points to keep Elk Lake in pace while Steele had six of her own for the Lady Sabers.

Steele added six more in the third quarter as Susquehanna began to pull away and led 44-27 at the end of three quarters.

Steele finished with 16 points while Huyck tallied 15 on the evening and Meghan Kiernan had eight.

Jones led Elk Lake with 16 and Decker chipped in with seven.

Montrose broke open the game in the third quarter on their way to a 51-27 win over Blue Ridge.

Tangi Smith scored seven points to open the second half and the Lady Meteors took a 30-19 advantage and extended it to 20 points leading 43-23 going into the fourth quarter.

The Lady Meteors took the early lead as Chalice Guyette and Mia Snynder combined for three threes and 11 points as Montrose took a 15-7 lead.

Pompey finished with 12 points to lead Montrose while Smith and Snyder each had 11 and Guyette chipped in with nine. Ashley Torres had seven to lead Blue Ridge while Glover and Lily Bleck each had six.

Trail erupted for 40 first-half points and cruised to a 60-27 win over Forest City behind Amaralis Thiel’s 18 points.

Bella Pleska led Forest City with eight points as the Lady Foresters were outscored 23-3 in the second quarter and fell out of reach.

In crossover action Riverside opened with 20 points in the first quarter and never looked back blitzing Mountain View 59-20.

Leading 20-7 after one quarter the Lady Vikes held Mountain View to a lone field goal in the second quarter to take a 39-9 lead into the half.