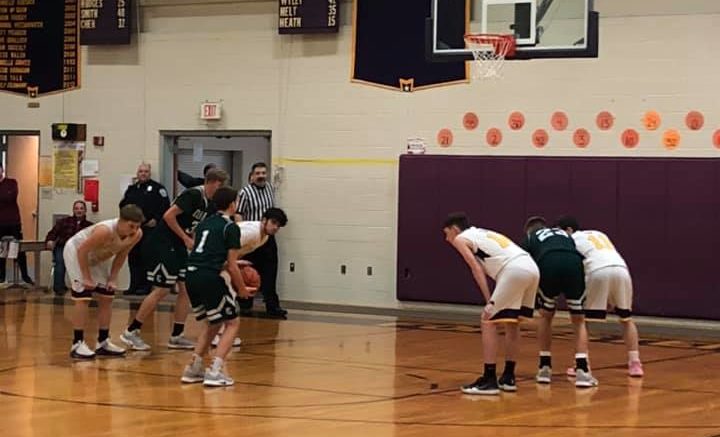 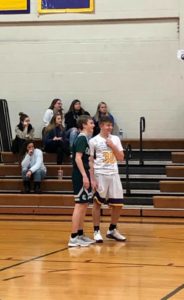 line in the fourth quarter as Elk Lake staved off Forest City for a 66-56 road win.

Leading 39-38 heading into the final period, Elk Lake surged ahead led by Mowry’s 10 fourth-quarter points and Gustin’s clutch free throw shooting as the Foresters were forced to foul to stop the clock. Gustin converted six of eight attempts and knocked down a three-pointer as the Warriors outscored Forest City 27-18.

The Foresters grabbed the early lead as Corey Daniels scored five points in the opening quarter while Jay Lipko and Logan Holsinger each had four. Trever Graham had eight points for Elk Lake who trailed 15-14.

The two teams matched output in the second stanza and Forest City led 25-24 at halftime as Wes Burleigh scored five points for the Foresters. Mowry scored eight of the Elk Lake points.

Elk Lake took the lead after halftime as Graham converted two three-pointers and Wyatt Casselbury added another and the Warriors outscored Forest City 15-13. Evan Piatak knocked down a pair of three-pointers and scored eight of the Forester points.

Mountain View used another big second quarter to garner their second win of the week when they upended Susquehanna 41-29.

After opening with a 7-5 first quarter advantage the Eagles held Susquehanna to one field goal and outscored the Sabers 17-4. Preston Petts scored six points and Michael Fanelli added five to pace Mountain View as the Eagles took a 24-9 lead into halftime.

Lackawanna Trail came from behind with a big fourth quarter to defeat Blue Ridge 47-41.

Blue Ridge got out to a fast start and led 15-5 after the first quarter as Gavin Rosa and Calvin Scheideler combined for 11 points.

Trail cut the lead in half during the second quarter as Nico Berrios and Richard Helbing each scored six points. Rosa had four for Blue Ridge who led 22-17 at the half.

Helbing and Berrios combined for nine points in the third quarter as Trail continued to cut into the Blue Ridge lead. Ben Bleck and Rosa each had four points as the Raiders maintained a one-point lead heading into the fourth quarter.

Helbing went off in the fourth quarter scoring 12 more points as the Lions took the lead and pulled away and the Blue Ridge offense stalled managing just nine points.

In a divisional crossover game at Blue Ridge Friday, the Raiders used a big opening quarter and held off a Carbondale rally to earn a 48-41 win over the Chargers.

Blue Ridge’s Scheideler scored four points as the Raiders took a 14-6 lead after the first quarter.

The Raiders expanded the lead in the second quarter outscoring Carbondale 13-10 behind five points from Carson Koehler and four each from Scheideler and Bleck.

After halftime Blue Ridge appeared to put the game away as Scheideler stayed hot with seven points to help put the Raiders ahead 43-26 heading into the fourth quarter.

Blue Ridge struggled at the foul line in the fourth quarter but held on despite being outscored 15-5.

At Montrose Thursday, a first quarter deficit proved to be too much for the Meteors to overcome as the Montrose fell to Old Forge 57-44 in divisional crossover game.

Old Forge jumped out to a 15-4 advantage in the first quarter behind Sean Donavan’s eight points.

Montrose’s offense came alive in the second quarter as the Meteors outscored the Blue Devils 16-12 behind Connor Watkins and Sam Stashko combined for 13 points to cut the lead to 27-20 at intermission.

In the second half Old Forge outscored Montrose 15-11 to expand its lead to 42-31 by the end of third quarter. Watkins had eight points to keep the Meteors within striking distance.

Be the first to comment on "Fourth quarter spurt propels Warriors"