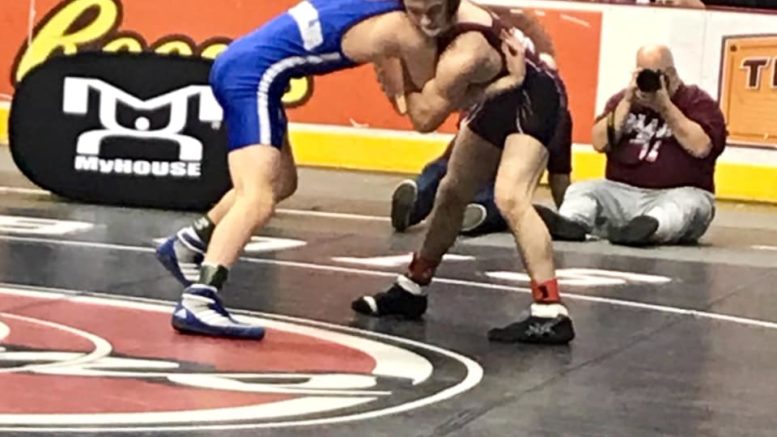 The match started with Elk Lake’s John Tyler picking up a forfeit win at 182 pounds, but Mountain View took a 12-6 lead after Caylee Gregory and Hunter Lovelace picked up forfeit wins at 113 and 120 pounds respectively.

The Warriors surged ahead with back to back pins at 132 and 138 pounds.

Elk Lake’s Joe Merschen pinned Mountain View’s Aaron Ransom in the second period putting Ransom on his back at the 3:05 mark and tie the match 12-12.

The Warriors took the lead when Todd Snyder earned a technical fall over Mountain View’s Caden Holtsmaster at 138 ponds.

Mountain View cut into the lead at 145 pounds when Nathan Ofalt earned a 6-4 decision over Elk Lake’s Codi Bomboy.

Thaddeus Woodhead earned the Warriors’ last points when he beat Logan Sprague 8-0 for a major decision.

Mountain View’s Hunter Jones got the rally started when he pinned Elk Lake’s Terrence Brozonis at the 3:37 mark of their 160-pound match and even the score at 21-21.

That set the deciding match at 170 pounds where Mountain View’s Jeremiah Schwartz swept in took down Noah Atkins in the second period getting the pin in 3:10 giving the Eagles the thrilling victory.

Lackawanna Trail picked up a pair of wins over their northern counterparts twice in three days.

The Lions earned a pin or major decision in 11 of 13 matches and picked up a forfeit at 132 pounds as the Lions shut out Montrose 74-0 on Tuesday.

Two nights later Blue Ridge travelled to Tunnel Hill and the Trail earned five pins and a major decision in their 64-11 win over the Raiders.

Blue Ridge sole points came when Jordan Williams put Tyler Rozanski on his back early in the second period getting the pin in 2:14 at 160 pounds.

At 220 pounds Eli Aldrich earned a technical fall when he went up 19-4 against Tynell Bracero.

Be the first to comment on "Pins rally Eagles over Warriors"