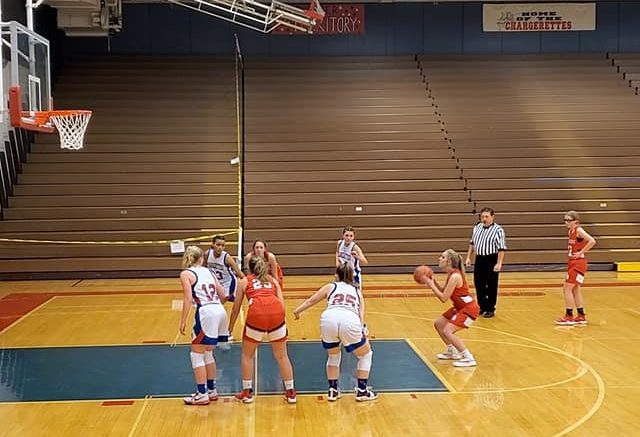 Struggles at the free throw line made for an interesting night but Elk Lake held on to defeat Mountain View 38-37.

After trading buckets in the first quarter Mountain View opened up a lead in the second quarter as Regan Cameron and Morgan Hammond combined for 11 points and the Lady Eagles took a 18-14 lead into halftime.

Zajaczkowski added four more in the fourth period and the Lady Warriors survived a 3-12 performance at the free throw line and held on for the victory.

Zajaczkowski led the way with 12 points for Elk Lake and Krista Jones finished with 10. Cameron and Hammond each scored 13 for Mountain View.

Ciara Hundley propelled Montrose to a quick start and stifling defense in the second half enabled Montrose to cruise to a 56-20 win over Lackawanna Trail.

Hundley scored six points and the Lady Meteors jumped out to a 15-4 lead.

Trail’s offense showed signs of life in the second quarter as Abby Wilson scored four points, but Tangi Smith and Mya Snyder answered with four of their own as Montrose maintained a 27-14 lead at halftime.

Montrose put the game away in the third quarter as Smith and Hundley combined for 10 points while the Lady Meteor defense limited Trail to two field goals resulting in a 42-18 lead heading into the final stanza.

Hundley finished with 14 points to lead the Montrose attack while Smith had 10 and Mya Snyder chipped in with eight.

Susquehanna wasted little time establishing itself against Blue Ridge scoring 16 points in the opening quarter and coasting to a 60-11 win over Blue Ridge.

Susquehanna matched that output in the second quarter as Huyck and Amanda Iveson combined for eight points. Blue Ridge’s offense showed signs of life as Madison Gelinger score seven of the Lady Raiders’ nine points and Susquehanna led 32-11 at the half.

However, intermission cooled off the Lady Raiders and Susquehanna held Blue Ridge scoreless in the second half and Makenzie Steel scored eight points

State finalist Dunmore overwhelmed Forest City with 24 points in the first quarter and cruised to a 49-16 win over the Lady Foresters.

Be the first to comment on "Lady Warriors nip Mt. View"