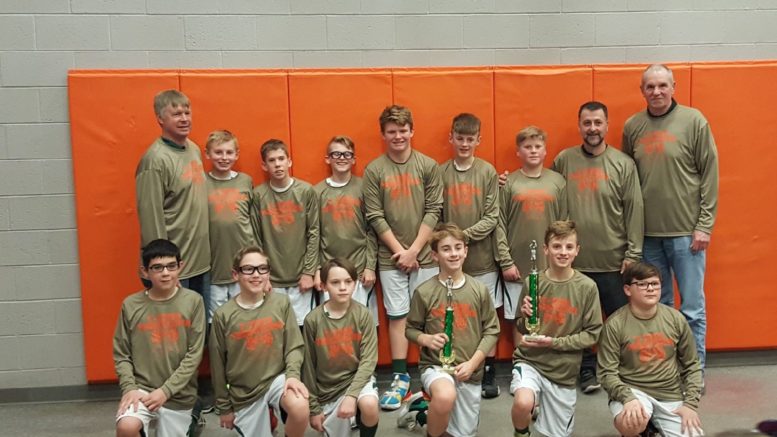 Elk Lake found itself in unfamiliar territory. Behind late in the game, yet the Little Warriors rallied and overtook Tunkhannock 53-49 to complete an undefeated season in the Endless Mountains Basketball Association sponsored by 21 Hoops.

The Warriors finished 14-0 on the year finishing the regular season undefeated and winning both games in the T-Town Throwdown held at Tunkhannock Middle School over the weekend of February 15-16.

Elk Lake jumped out to the early lead taking an 8-3 advantage in the first quarter.

However, in the second quarter momentum began to swing the other way as Caden Newswanger scored six points and Tunkhannock cut the lead to 19-16 at the half.

The Tigers wasted little time after halftime knotting the game on a Colin Gregory jumper and surging ahead when Zeke Goglin took a pass off an offensive rebound and nailed a 17-footer. Goglin followed with a jumper from the same spot and a three-ball from the same corner. Newswanger added five points and Tunkhannock led 34-27 heading into the fourth quarter. Caden Simmers had four points to keep Elk Lake in striking distance.

In the fourth quarter Elk Lake came roaring back. Simmers established himself inside and scored on a couple of put backs and Aiden Burry buried a three to give Elk Lake its first lead since halftime.

But the quarter belonged to John Heitsman. The lanky wing recovered from a player control foul to continue to attack the lane and score 10 points and give the Warriors the win.

Heitsman led Elk Lake with 18 points and Simmers finished with 16. Burry added 12 and Cohen Orlandini chipped in with six.

Tunkhannock was led by Newswanger who scored 19 and was joined in double figures by Goglin who had 15. Gregory chipped in with nine.

In the Consolation Final, Susquehanna avenged an earlier loss in the tournament to defeat Blue Ridge 43-42 behind 13 points from William Hobart and 10 a piece from Linden Baker and Christopher Serra.