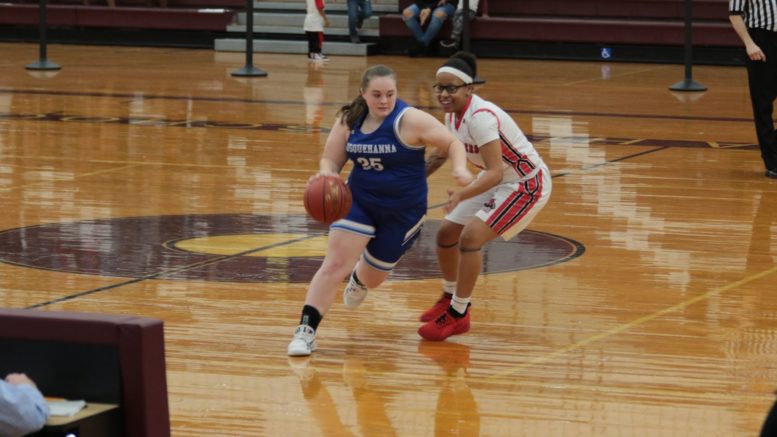 Survive and advance is the mantra of March Madness. No one knows that

Susquehanna’s Mackenzie Steele (4) starts a drive to the basket during the Lady Sabers’ game versus Chester Charter. Steele had five blocked shots as Susquehanna won 48-44 to advance to the second round of the PIAA playoffs.

more than the Susquehanna Lady Sabers.

Trailing by four with just over two and half minutes left in the fourth quarter Susquehanna rallied to claim a 48-44 victory over Chester Charter in the first round of the PIAA Class A Girls’ Basketball Playoffs.

After cutting the lead to two, Mackenzie Heath’s three pointer to gain the lead caromed off the rim into the hands of Mackenzie Steele who deftly laid the ball off the glass to knot the game.

“I always try to go to the opposite side of where the ball is shot,” explained Steele. “I didn’t know she wasn’t going to make it, but I was there just in case.”

The following Susquehanna possession Taylor Huyck drove for two of her game-high 28 points to put the Lady Sabers up for good.

“We have been in this situation before, so we had to play our game,” said Steele explaining the Susquehanna mindset as they trailed late.

The experience of Heath, Huyck and Steele allowed Susquehanna to weather the storm and prevail.

‘It’s huge,” said Susquehanna Coach Kirk Fallon of his team’s experience in playoff basketball. “They’ve played in a lot of big games and they know with two and half minutes left, it’s an eternity and way too much time to panic.”

Susquehanna rode the backs of their talented trio. Huyck led a quick start 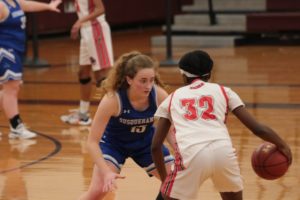 for Susquehanna scoring 12 points in the first quarter as the Lady Sabers opened with a 16-13 advantage.

“It was very important that we started off strong,” noted Huyck. “We were able to gain a lot of momentum.”

Huyck and Steele combined for eight points and Heath nailed one of her two three-pointers as Susquehanna extended their lead in the second quarter taking a 29-25 lead into intermission.

After halftime Chester Charter was able to contain Huyck and limit Steele and cut the lead to 37-35 by the end of the third quarter. Chester Charter took that momentum into the final stanza, seizing the lead midway through.

But Susquehanna remained undaunted by the task in front of them.

“It was important for us to stay calm and play our game,” said Huyck. “We had to take it one play at a time and make stops on defense.”

The brevity of time helped the Lady Sabers as well noted Coach Fallon. Susquehanna was able to get a score from Huyck in the open floor and set up their press to force a turnover.

“With that little time left we were just trying to get a quick quality shot,” said Fallon. “That series was important, and it happened so quickly that it didn’t allow the nerves to set in.”

While the play of his Seniors in adversity didn’t surprise Fallon, the experience was beneficial for his underclassmen who may not have had not faced that situation in the past.

“We had three sophomores and a Junior playing big minutes, and all contributed to a state playoff win,” saidd Fallon. “They’re getting more comfortable each time they get exposed to these big games.”